The Miami Marlins have a number of players who are reflecting the team's continued struggles this June, and one of those is most definitely Carlos Zambrano. One of the better parts of the first two months of the season, Zambrano's performance has dove-tailed this month much like the Marlins have.

It is very clear that a distinct lack of control by Zambrano has dragged his game down, as a the 7.1 percent increase in walks is the biggest likely culprit to his awful June month. The question is why, and that is a much more difficult question to explain.

A picture speaks a thousand words, and you can see right here exactly why Zambrano has struggled. Here are his pitch locations from the first two months of the season, courtesy of TexasLeaguers.com:

Here are his pitches from this month.

Just from that look, you can see that there is a large lack of density within the zone and a similar amount of pitches out of the zone between the two time periods. That shows what the walk rate clearly suggests, that Zambrano has been out of control of his pitches. But is there anything mechanical to that?

The problem with the idea that this was a mechanical issue is that Zambrano's pitches have looked pretty similar. One thing you heard often on the broadcast is that his velocity has been up and down, and that it is lower when he struggles. But at least according to Pitch F/X, his velocity has been pretty much the same throughout the season. Here is the data provided by TexasLeaguers and a chart provided by Dan Brooks of BrooksBaseball. 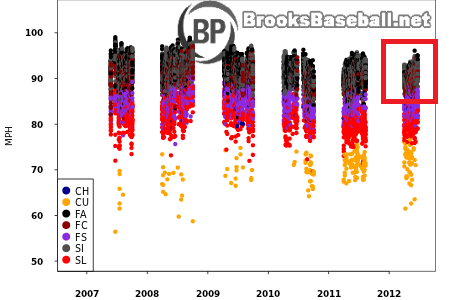 Those numbers look exactly the same. When you look at the chart, it actually seems like Zambrano's velocity is ticking upwards over the course of the season, and the numbers do seem to suggest that; almost all of his pitches this month were faster than those of last month. As far as we can see, velocity is not the issue.

You can see that Zambrano's usage has been different, but some of it is explainable by the fact that he has not been around the zone in June. For example, it is clear that not having good control of his pitches early in the count is going to force him to throw fewer sliders in PA, hence the lower slider count. He has compensated by throwing more of his go-to pitches such as the sinker, hence its increased usage. This does not necessarily mean that pitch selection is the problem so much as pitch selection has been affected by the problem.

If you take a look at the movement of the pitches, you do not see much difference between the time periods either. Here's the horizontal and vertical movement of Zambrano's pitches in April and May.

Here, on the other hand, is his work from this month.

You can barely tell the difference between these charts either, indicating that the movement of Zambrano's pitches have been similar all season. Looking at all this makes it difficult to imagine that it is a mechanical problem.

A Word on Arm Slots

Another thing that has been mentioned often on the telecast is the possibility that Zambrano's release points have been tinkered with or changed over the course of his June struggles. Is that true? Pitch F/X covers that as well. Here are his release points from April and May.

And here they are from this month.

I do not see a whole lot of difference here either, but I do see a couple more pitches that were off in terms of release point. Without looking individually at the results of these pitches, we can speculate that these could have been hard-hit balls or get-me-over pitches that Zambrano often throws when he is behind 3-0 in the count. Without being certain, we cannot tell whether this is contributing, but it remains a possibility.

The most interesting change between the last two months and this month is that Zambrano is lacking in whiffs. In April and May, he was getting swings and misses in 8.2 percent of his pitches, which was well in line with his last three seasons. This month, that is down to 5.9 percent, which is lower than even the mark in his debacle 2011 year. One would think that lack of swings and misses would be affecting his strikeouts, but it has not severely changed that. Instead, it is almost as if the lack of whiffs is coming perhaps primarily on pitches out of the zone. Indeed, in June, hitters are making more contact out of the zone (71 percent versus 65 percent) and they are laying off a few more pitches.

How does that lead to his current lack of control? None of it really explains anything, and that is somewhat reflective of the Marlins in June. Yes, we know Zambrano is struggling, but we cannot pinpoint why other than to simply say that he is. And that is a problem that has to resolve itself, because if the Marlins cannot find an underlying reason for this issue, they simply have to hope it plays itself out.