The Miami Marlins had to be disappointed after a tough loss in last night's game against the Philadelphia Phillies. Part of the disappointment was going to be having to face Cole Hamels today, but it seemed Hamels met his own foil on the Fish. No, it was not Ricky Nolasco, who pitched decently but got poor results, but rather Hanley Ramirez, who turned the game around for the Fish with a pair of home runs.

Hanley Ramirez continues to be on an epic tear. Since the start of May, he has hit .317/.358/.520, and today he continued with two home runs that were impressive both in terms of distance and clutch. There was some controversy with regards to the first home run, as the Phillies' outfielders appealed the call because a kid reached to grab the ball. On replay, it appeared that the fan did actually reach out into the field and catch the ball. However, the umpires, upon review, deemed the ball heading out regardless of the fan, so that homer delivered. 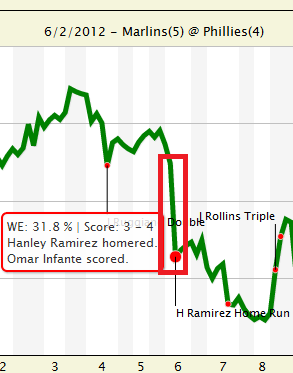 This home run came in the sixth inning following an Omar Infante single. At the time, the Marlins were down 3-2 after a good fourth inning in which Ramirez also hit a home run. As a result, the situation was at a Leverage Index (LI) of 2.6, meaning it was 2.6 times more important than normal. Ramirez delivered after a battle at the plate and helped to chase away Cole Hamels.

One thing that angered me during the game was Ozzie Guillen and the Marlins' handling of starter Ricky Nolasco. Nolasco did not have a terrible outing, as he went seven innings and struck out five hitters with only two walks and a homer. But his outing could have perhaps looked better if Guillen and company had not entrusted him with more than what was necessary. During the seventh inning, Nolasco came up to hit with one out and Chris Coghlan at first base. Guillen stuck with Nolasco because he had only thrown 71 pitches at that point and had him lay down a sacrifice bunt. 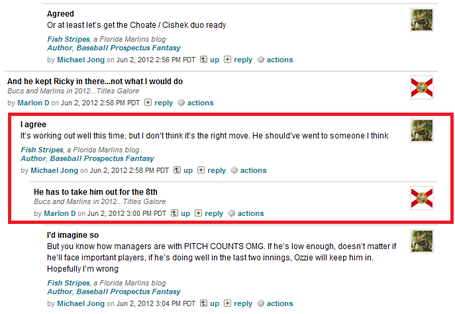 By the eighth inning, he was entering the fourth go-around in the rotation, when pitchers are traditionally worse. At this point, I said this on the live thread.

This was mere seconds before Nolasco allowed a leadoff triple to Jimmy Rollins followed by the four-pitch walk to Juan Pierre. Again, Guillen only pulled Nolasco when he "showed signs" of trouble instead of trying to predict when trouble would come. Given that Nolasco was not even having a dominant performance but was pitching merely average, you would figure that Guillen would have less of a leash on him. Unfortunately, because he had gotten a few ball in play outs earlier, his pitch count was down and Guillen was simply managing to the pitch count. He did not even have his bullpen ready when Nolasco allowed the triple; the team sent out pitching coach Randy St. Claire to stall for time while they readied a reliever. As a result, the Fish pulled Nolasco two batters too late and ended up giving up a run for their troubles.

Steve Cishek came in and finished off the inning only allowing a run and with a strikeout. It was not easy, but it could have been avoided had Guillen tried to anticipate problems and trust his bullpen instead of pulling his starter after damage had already been done.