The MIami Marlins put up one of their best offensive performances in the month of June, scattering 13 hits in a marathon 15-inning game against the Tampa Bay Rays. The Rays climbed back against starter Anibal Sanchez, who was unable to hold onto the 3-0 lead spotted to him early in the game. The bullpen, however, kept the game alive with strong performances by Ryan Webb and Edward Mujica, and Scott Cousins's big night led to the team's fourth win of the month.

There was not much to say about Anibal Sanchez, who pitched a little worse than expected but was still good enough for the Marlins to potentially take a win. Early on, Sanchez looked dominant, inducing four strikeouts in the first two innings of play. But he lost some control in the third inning, which was the only inning in which he allowed more than one hit. An Elliot Johnson triple on a Giancarlo Stanton misplay in the outfield allowed the Rays to score an easy run following a Jose Molina infield single to second base (that's right, you heard me correctly). Molina then came back to haunt Sanchez with a home run in the fifth inning against Sanchez.

Sanchez's final run was not allowed by him, as he let through a single in the seventh inning and got one batter out before being pulled by manager Ozzie Guillen. This was a smart move at the time, as Sanchez had thrown 105 pitches and was heading into his fourth trip through the order soon; Guillen wisely pulled him for Steve Cishek. Unfortunately, Cishek allowed a triple to Sean Rodriguez that scored the tying run with two outs.

Sanchez's night was riddled with pitches out of the zone. 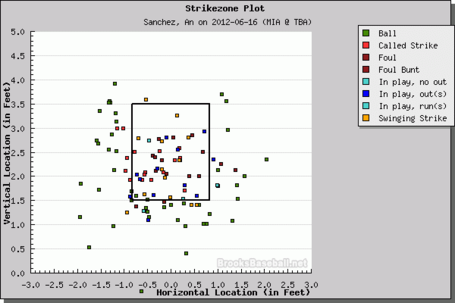 Clearly the control was not entirely there last night, but credit Sanchez for missing low when he did miss; only 12 of his 105 pitches were above the three-foot mark, and two of them were swung on and missed. Sanchez got batters to whiff on 13 pitches, which was right in line with his seasonal swinging strike rate as well. It was a mixed game in terms of effectiveness for Sanchez, but overall the performance was good enough and the Marlins will take that, minus the home run ideally, on most nights.

Offense Delivered To An Extent

The Fish offense finally brought home some runs for the team. The club scored in the first off a Jose Reyes single and a slew of productive outs and manufactured-run events, as he came around to score after a grounder moved him to second and an error brought him home. The Rays did help the Marlins with three errors in the evening.

In the second, the Marlins benefited from another error, this time by outfielder Matt Joyce, and brought runners to second and third with one out. Eventually, Reyes again delivered, this time with another single to score two. Reyes was almost a part of another potential winning run, as he tripled with two outs in the ninth inning before Hanley Ramirez struck out and failed to bring him home.

Of course, Scott Cousins was the eventual Hero of the Game, as he had a decent night for himself at the plate. Cousins fell a home run short of the cycle, but he contributed to getting runners to second and third in the second inning with a ground rule double. He also drove home the winning run with a down-the-line triple to score Justin Ruggiano. Ruggiano himself had a nice night after coming in as a pinch-runner in the eighth inning.

Overall, the Fish did not do all that well at the plate, batting .213/.262/.344 at the plate. But the big plays early and late went the Marlins' way, and for that the team should at least be commended.

The Fish had to hold the tie for a long time, and they were short-handed in the bullpen last night due to the 11-0 spanking the team received the previous evening. Because Carlo Zambrano could not get out of the third inning in the first game of the series, Chad Gaudin had to come in and work 4 2/3 innings and was unavailable last night. The Fish had to turn to Edward Mujica and Ryan Webb for long innings after the club worked Steve Cishek for only two-thirds of an inning earlier, and boy did those two deliver.

The two relievers combined for six innings of work in the extra-innings game. They faced 23 batters and struck out three while walking one, Webb was able to finish off the last few innings before the Marlins came up with a run in the nick of time. Heath Bell finished the game strong by striking out the side in impressive fashion, and the Marlins rode the bullpen's performance to a win.