Four Marlins Draftees That Could Reach the Majors Quickly

Share All sharing options for: Four Marlins Draftees That Could Reach the Majors Quickly 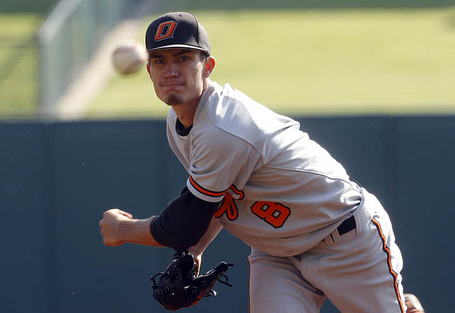 The Marlins finished drafting players last week and now they have until July 13th to get their draftees signed. One factor that goes into where players are drafted is how long it will take them to reach the majors. This definitely factored into the Marlins decision to draft Andrew Heaney before Courtney Hawkins, and it became a reoccurring theme throughout the draft. Without further adieu, here are four players that could reach the majors before any other Marlins players drafted in the 2012 MLB Amateur draft.

Andrew Heaney is the easy pick here. He was Marlins first pick, and he is a polished college left handed pitcher. I wouldn’t be surprised if Heaney was pitching in the majors on Opening Day in 2014. Heaney has great mechanics, a repeatable delivery, and his control is already advanced for the low levels of the minors. Potentially, if the Marlins decide to let Heaney throw later on this season, we could be looking at one of the most talented starting pitching staffs in the minors. It is possible that sometime around August, High-A Jupiter could have Jose Fernandez, Adam Conley, Andrew Heaney, Chad James, and Jose Urena. Heaney and James, the two Oklahoma lefties who graduated from high school in the same year, would finally be reunited.

There really isn’t any reason for the Marlins to rush Andrew Heaney. He’ll need at least one full season in the minors before he’s ready for the big leagues. However, Heaney will be moved through the minors quickly because he is an older prospect, and part of the reason the Marlins drafted him is because he won’t take too long to reach Miami.

Even though Stony Brook managed to advance past the LSU baseball team in the College World Series super regional, the LSU team is far from bereft of talent. One of the most exciting players on the loaded LSU roster is shortstop Austin Nola. Nola has potential to hit for average, but I don’t see the bat speed as above-average. Nola could reach the majors quickly because he has a lot of experience, and he has soft hands over at shortstop. It wouldn’t be shocking if Nola reaches High-A, or even Double-A by the end of the 2012 season.

Anthony Gomez is developing a reputation for being a "gamer". He has a high baseball IQ, and he plays the game with a lot of hustle. Gomez, the Marlins sixth-round pick, played college baseball at Vanderbilt University. He’s a shortstop who has decent hands, and hits for average. He’s a contact hitter who is never going to hit for power, so he probably profiles as a utility player at the major league level. If Gomez signs with the Marlins, which Vanderbilt coach Tim Corbin expects to happen, he could reach the majors in the next couple years.

Matt Milroy was the Marlins 11th round pick in the 2012 Amateur draft. Milroy is a relief pitcher with lights-out stuff, but he has never had control. In fifty-three innings in 2012 at the University of Illinois, Milroy struck out sixty-three batters. Milroy has always struggled with walking batters, which has held him back more than anything. He throws a fastball, curveball, slider, and changeup, but he has never really had to use the changeup. Milroy’s changeup development will be crucial for him, despite the myth that relievers don’t really need changeups. If Milroy can have an effective changeup, he has a better chance of reaching the majors.

All of these players have potential to play in Miami very soon. While they might not have as much potential as some of the Marlins other picks, they are better bets to reach the majors. In the coming years, these four players will be exciting to watch as they rise quickly through the Miami minor league system.