Marlins' Failure to Drive In Reyes a Microcosm of Season

Share All sharing options for: Marlins' Failure to Drive In Reyes a Microcosm of Season

Last night in the Marlins' 2-1 loss to the Boston Red Sox, there were two situations in which Jose Reyes was on third base. Both situations were opportunities to score a run which would eventually be the tying run of the game. In both cases, the Miami Marlins showed a little bit of what their problem was with runners in scoring position this season. In one situation, the Fish had a golden opportunity and were unable to capitalize, as they have failed to do all season. In the other case, a decision was made that might or might not have been faulty, and it did not break the Marlins' way.

The first situation came in the first inning, after Jose Reyes hit a leadoff triple. The Marlins had three PA to drive the run home, two of which would have driven the run in with outs of almost any kind. For Omar Infante and Hanley Ramirez, their job was to put the ball in play and not as a pop up, as only pop ups or strikeouts would fail to drive Reyes in. What happened in those PA? Infante went first and looked awful at the plate. 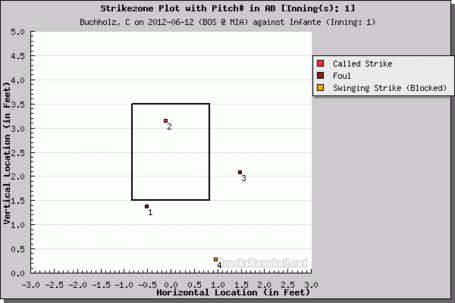 Those are four pitches, three of which were out of the strike zone. infante got down 0-2 by swinging at a pitch low in the zone and fouling it off. Maybe the third pitch was an excusable swing down 0-2 in the count. But swinging at a breaking ball in the dirt? That does not help anyone.

For Ramirez, the story was slightly different, but had the same ending. 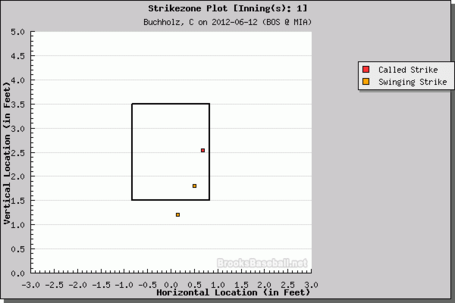 Two swings, both whiffs, and one on a pitch low in the zone again. Ramirez could not fight off any pitches from starter Clay Buchholz and went down on three strikes, and very quickly Buchholz worked himself to two outs and avoided the run-scoring-on-an-out situation. Giancarlo Stanton then came up and was thoroughly fooled.

What is frustrating about this PA is that Stanton was up 3-1 in the count before flailing at what I could only presume were two silders or breaking balls that tailed away from him. The problem was that five of the six pitches thrown to him were out of the zone, either flat or breaking away from him. It has been noted that Stanton has occasionally struggled versus the well-placed slider going away from him, but it is especially frustrating when you strike out while ahead in the count on those pitches.

Nevertheless, those situations were unfortunate and disappointing, but credit Buchholz as well for at least pitching well. The play in the third inning was a far more interesting decision to dissect.

With the game still tied and two outs, Jose Reyes and Omar Infante put up back-to-back singles to put runners on first and second. Hanley Ramirez has a tough PA versus Buchholz, but this time he manages to hit a squibber that gets by Buchholz and into the middle of the infield. Here is the play, for viewing pleasure.

Off the bat, you can tell that Aviles was going to have a difficult time making that play to first base. When I watched it, I thought it was an infield single all the way, especially with Ramirez's speed. But someone on the Marlins had Reyes continue home, and first baseman Kevin Youkilis makes the throw and play at the plate to get Reyes out.

This is a perfect time to use win probability to evaluate a decision on the basepaths. Using The Hardball Times'Win Probability Inquirer, we can determine an estimate of what the Marlins' chances of scoring were in that situation and find the breakeven point for this decision. Just because the play did not succeed that time does not mean it was a mistake, but how often would third base coach Joe Espada and Jose Reyes have to be right in sending home Reyes for it to be a good move?

Now, consider the play itself. Reyes took a decent turn at third base but slowed up about halfway to the plate before trying to speed through. Espada was pointing at home plate, which is not the typical 'waving home" signal but does seem a signal to send the runner anyway. Keep in mind that this is after Ramirez has already run past this camera. 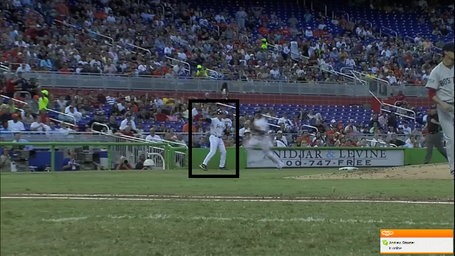 Did Reyes have a 53 percent chance of scoring the run? Color commentator Tommy Hutton made it sound like Reyes had little chance of scoring, even if he had not let up for a second halfway down the third base line. On the throw, he was beaten by a country mile, so that does not help the situation. It is an interesting decision in that the game was close and, often in those cases, you play for the run rather than playing it safe. But on an infield single, trying to get home seemed questionable even for the speedy Reyes.

There is an additional qualifier here. Tack on the fact that Giancarlo Stanton was coming up next to the plate, and it does seem a little more questionable to risk the out at home. Stanton is the team's best hitter at the moment, and despite the fact that, in retrospect, he had a bad night at the plate in striking out four times, Espada and company had the option to play for Stanton driving in the run rather than risk the out on what would have at least been a close play.

While the first situation was a microcosm of the struggles the Fish have had hitting with runners in scoring position, the second one was a combination of decision-making and bad breaks that also led to a lack of runs scored. The decision was not mine to make, but I will put it up to the Fish Stripes readers: over / under 53 percent for that Reyes play to score?