There was nothing complicated about this game. It was all bad, all the time. The Miami Marlins took an embarrassing 13-4 loss to the Tampa Bay Rays, securing their second straight losing series and their fifth straight loss. This one was not close to start, as starter Carlos Zambrano was out of control and threw up seven runs before the third inning was over.

Zambrano's Back Leads to Wildness

Zambrano was way off the mark tonight, and his ERA skyrocketed up to 3.55 from 2.81 before the start. He gave up seven runs in less than three innings of work, and it was later found that something physically was affecting him. By the looks of his pitch location, it certainly seemed like something was physically wrong. 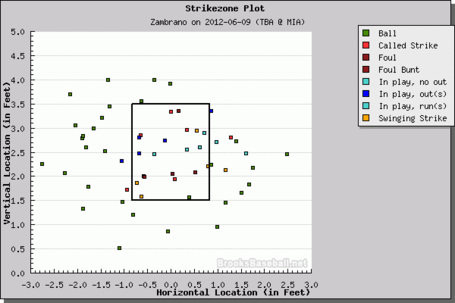 It does not take a genius to see that he was everywhere and far off of the strike zone last night. Prior to the two-run homer allowed by Zambrano in the third inning, Ozzie Guillen and the Marlins trainer came out to check on the right-hander in case of an injury. After the home run, the team came out again and pulled Zambrano. It seemed like it was serious enough to take him out even without the bad results, as Hanley Ramirez was waving the staff over from the dugout. By that point, however, the damage had been done, and the Fish were way behind.

The Marlins did get back into it offensively with a four-run sixth inning. That inning was capped by Justin Ruggiano's three-run homer against Matt Moore. Outside of that, however, the Fish struggled, not being able to score the rest of the way despite eight hits. It did not help that the team's bullpen gave up an additional six runs over their six-plus innings.