Is Carlos Zambrano Really Back?

Share All sharing options for: Is Carlos Zambrano Really Back?

Over at FanGraphs, friend of Fish Stripes Jack Moore discussed the possibility of a rebirth of Carlos Zambrano now that he has come down to Miami with the Miami Marlins. He brings up the argument that, as of right now, his peripherals look extremely impressive.

There’s reason to believe this change is real. Zambrano has radically changed his pitch mix, almost completely eschewing the four seam fastball in exchange for more pitches with movement. According to his Brooks Baseball player page, his four-seam usage is down from 27% to 10%, with that 17% going instead to the splitfinger (+5%), the cutter (+7%) and curveball (+3%), among others.

As a counterpoint, Zambrano's Pitch F/X section of his FanGraphs page has him throwing more sinkers and splitters in exchange for a drop in cutters, so it is quite a challenge to truly determine to what pitches he is changing and whether these changes are the reason for his success. The truth in terms of results, however, is undeniable; Zambrano is missing bats at some of the highest rates of his career, with his contact rate down to 77 percent for the first time since Pitch F/X was instituted in 2007. He must be doing something right to get pitcher to swing and miss so often.

The possible key? Location, and that very thing could be the same key to why he is suddenly suppressing home runs once again.

In both pitch categorization systems, it appears that Zambrano has added a splitter to his repertoire. Let us see what that splitter is doing. Here are the results against right-handers.

Obviously, this sample is small, but apparently it is a new pitch with increased frequency for Zambrano, You can see Zambrano is not placing the ball in the strike zone but is getting a lot of swings and misses from its movement. In that respect, it seems like he is using it as an out pitch much like the typical use of a slider. One look at the location of the pitches and you realize exactly why. 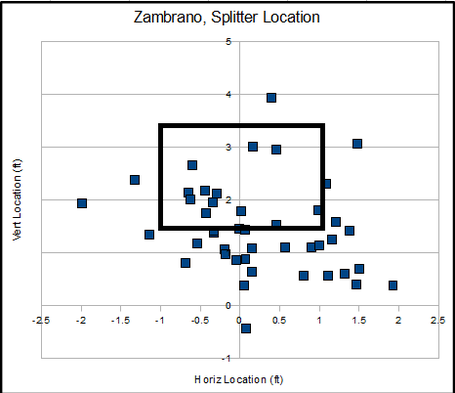 It turns out almost all of the splitters he threw were thrown low in the zone, with barely any pitches located above the 2.5-foot mark. Zambrano's movement is certainly helping him get whiffs, and he needs hitters to continue to swing at those pitches so that he can deliver groundballs and swings and misses going forward. Indeed, the increase in the use of this efficient whiff pitch may be the reason behind the increase in swings and misses by Zambrano this year, and it certainly is helping towards his newfound ground ball rate.

It seems Zambrano's newest gameplan is indeed to keep the ball low. Take a look at how he is placing his sinkers this season versus last year. 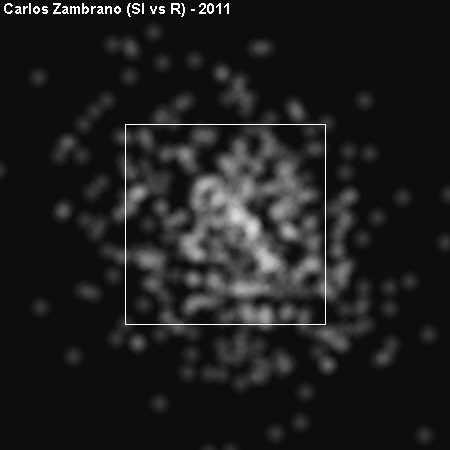 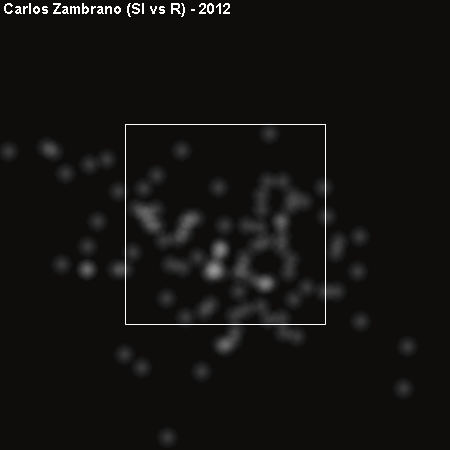 Again, the sample is small, but you can see that Zambrano's locations have been generally lower in 2012 than they were in 2011. He has barely located anything near the top of the zone, whereas the previous season he placed a good number of those sinkers up in the zone. This year, he has literally missed none of his sinkers against righties above the traditional strike zone.

In addition to that, Zambrano's placement in the zone of his sinker has been impeccable.

The use of the sinker has not only induced ground balls but also gotten him an amazing number of called strikes. Zambrano's placement in the zone has earned him a lot of value and made up for the large number of balls he is getting on out pitches like the splitter and slider. Of course, there is also the additional benefit of inducing more ground balls by throwing these pitches, and that certainly applies here, as Zambrano currently has a ground ball rate of 50 percent this season.

So is this real? Provided he can continue throwing the quality sinker and splitter that he has thrown thus far, I would imagine yes, this is real. Of course, keep in mind that "real" is not the frighteningly low ERA he has posted, but rather the FIP (3.59) or SIERA (3.77) numbers that he has posted thus far, as those are a much better account of how his peripherals will perform in the future. If that is the case, then the Marlins have a strong rotation piece on their hands and they will not have done much to get him, sacrificing only two years of Chris Volstad, who would have been a 3.80 ERA starter at best.