After what can only be considered a smashing success of a west coast swing, the Miami Marlins return closer to the east coast as they drop by the Houston Astros for a three-game series to finish up their road trip. The Fish are coming in hot, having won six straight games. The Astros, however, posed a decent challenge the last time the Marlins faced them, as the Fish took two tough games out of three and had a chance for the sweep were it not for a tremendous collapse at the hands of Heath Bell. The teams will battle tonight in the opener, pitting the Marlins' Carlos Zambrano versus the Astros' Wandy Rodriguez.

Tale of the Tape

The Astros have been surprising thus far this season, as they have posted a top-notch offensive performance behind a number of also-rans and players who were not expected to amount to much. The Fish have done the exact opposite, as they have underperformed given the talent of their lineup, However, the Marlins have been hitting better recently, and it has been good to see guys like Hanley Ramirez, Jose Reyes, and Giancarlo Stanton bounce back after poor starts to the year. The Astros' overachievers like Jose Altuve and Jed Lowrie are bound to regress, so the Marlins are hoping this series is the one in which they will take advantage of an expectedly undermanned offensive unit.

The park dimensions for Minute Maid Park are extremely odd. They are a slight pitcher's park despite actually encouraging home runs due to the extremely short left field porch; the 315-foot distance down the left field line actually extends a decent amount in left field before hitting the spacious center field "Tal's Hill."

If Carlos Zambrano has been lucky to be this good this season, than Wandy Rodriguez has been extremely fortunate. Truthfully, we have always known Rodriguez to be a good starter, but it is surprising to see him be as stingy as he has been in the early part of the year. He has yet to allow a home run, but the plethora of good bats coming in for the Fish will hopefully put a stop to that.

Zambrano has been strong in terms of preventing runs, but his peripherals suggest a future that is not as bright. The bad news is that his strikeouts and walks are right where they were last season, but the good news is that he is holding his home runs back once again, and that has translated to at least a decent 4.04 FIP despite the impressive ERA. Even if the other shoe falls, Zambrano may still be OK for the Marlins in 2012.

- If you are watching the game on TV or if you are lucky enough to be live at the game, keep an eye out for the Astros jumbotron, because it contains something extremely special. 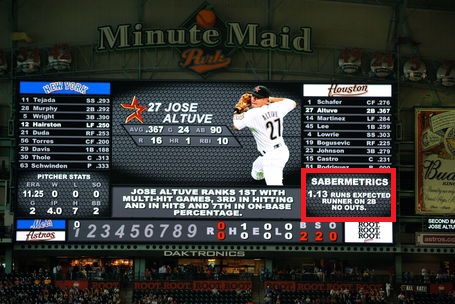 That area highlighted in red has the run expectancy of the base-out state. The RUN EXPECTANCY, gang. You can understand how exciting it is to see something as simple, easy to explain, and really informative as run expectancy finally getting on a scoreboard in a major league stadium. It is such an informative little stat that baseball fans undoubtedly cannot help but like it if they see it. If the giant "Sabermetrics" headline above it does not turn off fans, Astros fans should be happy with this new piece of data available to them in games.

This is just a part of a bigger, more expansive inclusion of sabermetrics in the world of mainstream baseball. For a site like Fish Stripes that strives for that kind of analysis every day, it is super exciting to see this sort of data getting into broadcasts and stadiums. Now, if we can only get Rich Waltz to mention it once in a while (Tommy Hutton is clearly a lost cause).