Ricky Nolasco continued his string of excellent starts, helping the Miami Marlins to sweep the San Diego Padres and claim a six-game winning streak. This win also brings the Marlins back to a .500 record after a very difficult April month.

Ricky Nolasco allowed the Padres to take the lead in the sixth inning off a two-run double, but he quietly pitched a very good game, lasting until the seventh inning for the third consecutive start - something the Marlins desperately need. 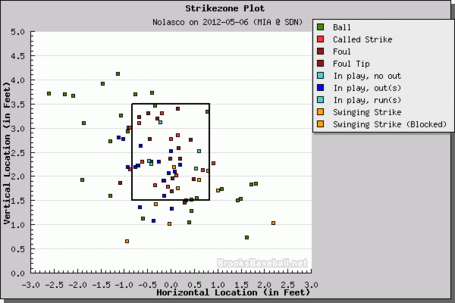 Most of Nolasco's swing-throughs came from his slider, which he wisely kept down in the zone. His fastball only averaged 89.3 miles per hour and did not generate any whiffs from opposing batters. Nolasco's success has not come off of strikeouts, but impeccable command to keep hitters off-balance and prevent walks. In fact, he has only struck out 13 percent of batters, which is among the bottom fifth of all starters. That number is likely to regress positively to Nolasco's career norms, but it won't be a problem as long as he continues to walk so few batters.

Although Fish Stripes does not use pitcher wins as a metric to evaluate players, the statistic does have historical importance. Yesterday, Ricky Nolasco improved to 4-0, giving him his 68th career win and tying him with Dontrelle Willis for the most in Marlins history. Hurrah for Ricky. He is a cool customer and a consistent performer for the Marlins. Consistent performers often go under-appreciated.

While Ricky Nolasco stole much of the media attention with his victory, there were other players on the team who contributed. Edward Mujica successfully closed out the game, striking out John Baker and Andy Parrino. The issue of Heath Bell and that $27 million contract are weighing heavily right now as Bell has an atrocious 11.42 ERA. Unfortunately, the contract would still be bad even if Bell had a 3.50 ERA. All the Marlins need to do now is recognize Bell is a sunken cost and not use him in high-leverage situations.

The bats also came alive today, helping to score a whopping six runs. Jose Reyes and Emilio Bonifacio both had two hits, while Hanley Ramirez had a lone double in five plate appearances. Hanley's lack of on-base ability this year is puzzling for a career .377 OBP player.

Logan Morrison hit a triple in the top of the sixth that scored Hanley Ramirez and tied the game. Omar Infante and Giancarlo Stanton each had a hit and a walk. Gaby Sanchez hit a single that scored Logan Morrison.

This is all short sample size madness, but the offensive picture has looked markedly better recently. Everyone expects the Marlins to start hitting soon and now is a good time. The team should start the series against the Astros today with all the confidence in the world.