The Miami Marlins picked up their fifth win in a row in a tightly-contested game against the San Diego Padres. The game was lead by Mark Buehrle, who was able to take one for the team on a night when multiple relievers were rendered unavailable due to extra workload over the last few games. Buehrle threw a complete game, allowing just five hits and one run in those nine innings. Meanwhile, the offense did struggle for a while against opposing lefty Clayton Richard, but as soon as the bullpen emerged, the Marlins took the game with three runs in eighth and ninth innings combined.

Mark Buehrle was on the money for most of yesterday night's game. Sure, he had to have a decent amount of help from the Marlins' defense, which as we know is not necessarily a good idea. But two things stood out in Buehrle's start: his ground balls and control. 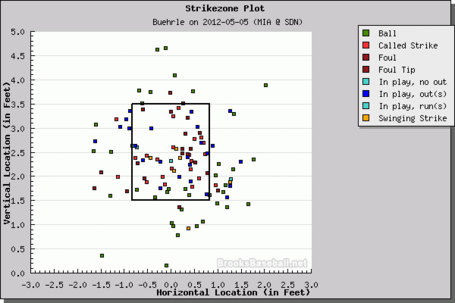 Of Buehrle 116 pitches, 64 were located in the traditional strike zone, good for a 55 percent rate in the zone. His rate of strikes improves when you look at his balls to called strike ratio. Buehrle was getting a 1.4 to one ratio on balls to called strikes with his fastball, meaning his placement was generally strong. His other impressive placement pitch was his curveball, on which he got four balls and five called strikes.

When he was not getting strikes in a variety of ways (Buehrle got 49 strikes that were not in play out of a total of 88 pitches not put into play), he was getting ground balls. Buehrle got ground balls on 67 percent of his balls in play, It turns out that when Buerhle forces this many ground balls, he generally ends up having success; in each of his starts with more than 45 percent ground balls, he has a 1.54 ERA.

The Marlins' offense is on a relative roll following the series against the Arizona Diamondbacks, and it is good to see particular players playing well after a poor April. One of those players is the eminently important Giancarlo Stanton, who blasted another home run yesterday night. Here is what the home run looked like courtesy of ESPN Home Run Tracker. 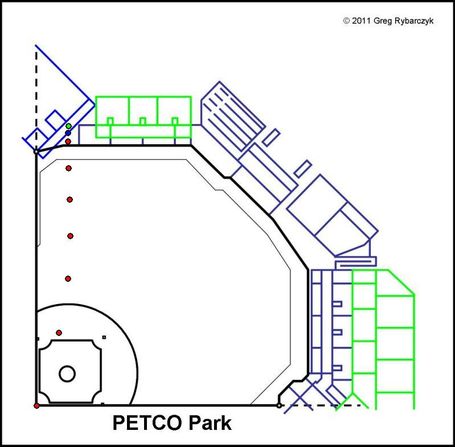 When you check the highlights, the home run was a towering shot, but it definitely did not travel as far as some of his other ones. Still, after a slew of line drive homers for Stanton this season, it is certainly a good thing to see Stanton hitting a prototypical Stanton bomb, complete with massive hang time. The Marlins have to be happy with how well he has hit in the last few games; Stanton has five home runs in six games after hitting none prior to the last day of April, His home runs so far have been low distance compared to last year; this season, he has averaged 395 feet on his "true" home run distance (accounted for wind and other park factors), while last year he averaged 416 feet.

Hanley Ramirez also happens to be fairly hot right now, as he ripped off a three-hit night last evening. The extra hits bring his season line up to .219/.311/.400, which is still not good, but is on its way to acceptable. In the month of May, he is hitting .261/.292/.435 with a home run to his name as well. It is very easy to imagine both him and Stanton improving a great deal going forward and returning to something around what we expected from them before.