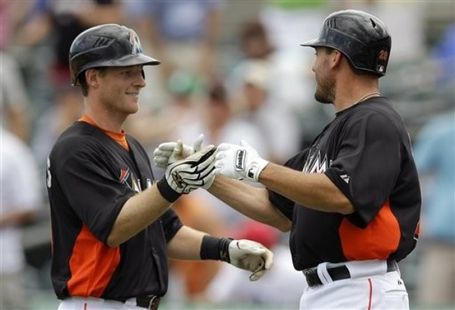 
So far, I think the Marlins have to be pleased with the way their top prospects have been playing. In particular, the pitchers have been tremendous. However, there are a lot of talented Marlins' minor leaguers that are batting injuires. Here are a couple of notable injuries from each Marlins affiliate.

Jared Rogers: Rogers was drafted by the Marlins in the 36th round in 2010 out of Rice University. He is 6'7'' and around two hundred pounds. He has been compared to Doug Fister before and he's gained a reputation for his outstanding work ethic. Last year, Rogers struck out fifty-four batters and walked sixteen in eighty innings with Greensboro. There's been no news as to what Roger's injury is but considering he hasn't pitched all year, it's probably serious.

Terrence Dayleg: Dayleg was selected by the Marlins in the 22nd round of the 2009 amateur draft. He hails from Canada but he went to college at Seminole State college and then Western Kentucky college. Dayleg went on the Disabled List after a productive nineteen games for the Hoppers. I don't think Dayleg's injury is as bad as Rogers', so he shouldn't miss too much time.

Arquimedes Caminero: Aside from just having an awesome name, Arquimedes Caminero is also a pretty awesome pitcher. Last year, he was generally considered to be one of the Marlins' top thirty prospects. Caminero was signed by the Marlins about seven years ago, and he first pitched in the Dominican Summer League at age 19. He has been said to have hit 98 MPH, and anytime you see a teenager do that, he is a prospect. Unfortunately, now he is twenty-four years old, injured, and still at High-A.

Caminero (Which I though meant waiter in spanish but Google Translate disagrees.) didn't pitch at all last year unless you count one inning at Rookie ball. Caminero'sinjury is unknown but definitely serious. If he doesn't get back on the moundby the All-Star break, his career with the Marlins might be over.

Mark Canha: Canha is a twenty-three year old first baseman who was drafted in the seventh round of the 2010 amateur draft out of the University of California. According to Canha's twitter, he is also known as The Canhamal, 12 Pack, and Pooh Bear among other nicknames. If having the nickname "Pooh Bear" doesn't earn a minor leagueryour respect, I don't know what will. He had gotten off to a decent start for Jupiter in twenty-one games, but he was recently placed on the 7-day Disabled List with a thumb sprain. It's just his thumb, so it shouldn't be a very serious issue. However, he did injure his same thumb earlier in the year, so this sprain should be classified as a reinjury. Hopefully, Canha can get back in the lineup soon and pick up where he left off.

Jake Smolinski: Okay, technically speaking, Jake Smolinski isn't eligible for this list. However, he didjust come off the Disabled List a couple of games ago, and I feel like talking about him. Smolinski was drafted by the Washington Nationalsin the second round of the 2007 amateur draft. In the 2008 offseason, the Marlins traded Scott Olsenand Josh Willingham for Emilio Bonifacio, P.J. Dean (now out of baseball), and Smolinski. Back then, Smolinskiplayed a pretty decent second base andwas though to be a prospect with the ability to rise quick through the minors. Fast forward to 2011, and Smolinski finally got his first shot at Double-A. Last year, Smolinski hit .245 in one hundred and sixteen games in Jacksonville. However, Smolinski did only have a .269 BABIP and he had fifty-nine walks.

The reports last year on Smolinski weren't promising. 2012 is probably going to be a make or break year for this once top prospect. Fortunately, from what he has done so far, Smolinskilooks like he is going to have a breakout season. He's currently hitting .377 with a .486 OBP in sixteen games. I believe that people gave up on Smolinski too quciky after his struggles last year at Double-A. It will be very interesting to see if he can keep producing in Double-A, and if he does, how long it will be before he gets called up to New Orleans.

Josph O'Gara: Another extremely tall pitcher, O'Garawas drafted in the 31st round in the 2009 amateur draft. He is another 6'7'' right-handed pitcher on the Disabled List. In his two starts this year (11.2 IP), O'Garahad only allowed on earned run. This is his second year at Jackosnville, so if he were to stay healthy and keep producing, a promotion to New Orleans would be probable. Unfortunately, O'Gara has been placed on the 7-day Disabled List. I'm not sure why yet but I will try to keep you guys posted as to his health.

The Zephyr's only have two players on their 7-day Disabled List; Clint Sammons and Robert Ray. Both players were brought in this offseason as minor league free agents and both have major league experience. Ray is a 6'5'' pitcher who never reached his potential in the Toronto Blue Jay system. Clint Sammons is a veteran catcher who has bounced around a couple of organizations, but is most well-known for backing up Brian McCann for a couple of years. Ray has a neck injury, but he has already pitched in a few simulated games. I would be surprised if we didn't see Ray join the Zephyrs' bullpen in the near future. As for Sammons, I have no idea what his injury is but I don't think the Zephyr's are trying to rush him back.

Overall, the Marlins should be pretty pleased that none of their premier prospects have suffered serious injuries so far. Injuries aren't fun, but their a part of the game andthe Marlins will almost surely see a couple of their top prospects go down this year. If Miami can continue to develop their prospects at the rate they have been recently, there is no need for them to panic about these players' returning immediately.