Heath Bell and His Uncertain Future

Share All sharing options for: Heath Bell and His Uncertain Future

Amid all of the good will that comes from a three-game sweep of the San Francisco Giants on the road, the Miami Marlins are facing some adversity. The events of the previous three games, in particular the second game that required an extra-innings home run by Giancarlo Stanton to achieve victory, that have put into serious question the future of Heath Bell, the Marlins' $27 million closer that the team signed this offseason. While Bell was supposed to bring security and a veteran hand into the ninth inning of the Marlins, he has only brought about trouble for the Fish. Bell has saved only three of his seven save attempts, with three blown saves and four "Meltdowns" (a statistic, alongside Shutdowns, created by Tom Tango and based on a relief pitcher accumulating a certain amount of positive or negative WPA).

What is happening with Bell, and what is going to happen in the future now that he has helped to cost the Marlins four different games? The answers here are very intriguing.

When you look across Bell's FanGraphs page, there is not a single positive sign to be seen. His strikeouts are way down, his walks are sky-high, he has the lowest ground ball rate of his career, his BABIP is a towering .387, and everything comes to a 11.74 ERA that does not look a whole lot better via FIP (6.89). So why are all of these things happening?

Well, in just looking at the two results, two thoughts come to mind:

1) He is not spotting his pitches well, leading to more walks.

2) He is not getting enough swings and misses, leading to fewer strikeouts.

When we look peripherally at his pitches, it seems like there are some changes associated with these problems.

The poor location in terms of placing pitches in or out of the zone is supported to some degree by these numbers. Bell's percentage of pitches in the zone is down two percent from last season and three percent total from his career rate, so he is not pounding the strike zone as often. Similarly, Bell's ratio of balls versus called strikes on his fastball is down from last season; he went from 1.46 in 2011 to 2.0 in 2012.

The other problem is also evident from this chart. Hitters are making contact at a greater rate than ever before, but it is notable that the rate on pitches in the zone is particularly increased. Not only are hitters laying off on more and more pitches out of the zone, but they are making contact on more and more pitches in the zone, and the distribution is a good deal different even in the small sample size.

Bell would have allowed two or three fewer balls in play had he allowed foul balls at his 2011 rate, so the difference is minuscule at this point in the season. But every ball in play counts when the alternative is a pseudostrike that at worst repeats the count.

Of course, the above really just gets into the "what happened" more specifically without truly addressing the "why it happened" question. It does appear that hitters are making more contact on pitches in the zone while laying off of more pitches out of the zone. The contact has also been better just based on slugging on contact (.761 slugging percentage of contacted fastballs in 2012 versus .338 in 2011) and percentage of balls in play versus foul balls. But we cannot find out mechanically why this is happening. A look at his pitches in terms of movement and release point revealed no out-of-the-ordinary changes. His velocity is down about a mile per hour as well. A look at the location of his fastball does reveal something of interest. First, his fastballs from 2012: 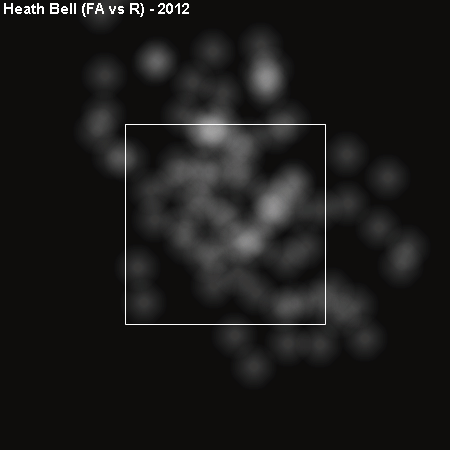 Compare that to his 2011 fastball locations: 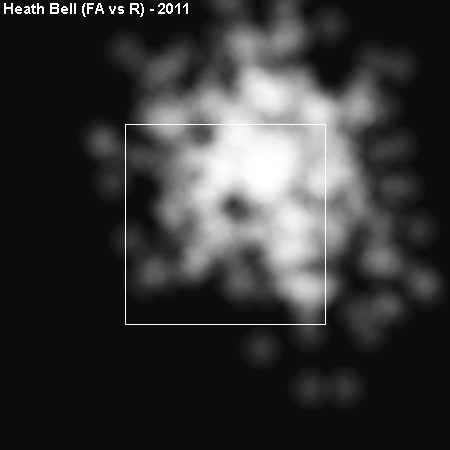 Obviously the charts are a little different, but the early looks in terms of foci of locations in 2012 have them a little lower and towards the middle of the plate rather than the corner up and away. Perhaps some of this location is changing hitters' approaches towards Bell.

The Marlins did have a save opportunity yesterday afternoon, but neither Bell nor Steve Cishek were available. With Cishek's success early in the season, Fish Stripers were calling for Bell's head and demanding Cishek take over in the closer capacity. Guillen's quick hook on Bell once he began to show signs of blowing the save against the Giants indicates that the manager has a definite short leash despite numerous traditional reasons to keep Bell in the closer's spot. Nevertheless, it does seem the Marlins will consider a change.

What could the Fish do? Turning to Cishek or Edward Mujica would not be a terrible idea, even for a temporary reprieve while Bell works on his mechanics or other issues causing these early problems. If he can recover while pitching in a reduced leverage role, the Marlins will most certainly insert him back into the closer role; after all, the team is paying $9 million a year for his services. However, if he does not recover and continues to struggle, look to Cishek being first in line for closing duties, and note that the overall number of saves and games saved or lost by the closer will not change much over what Bell was projected to do before the season began. In the end, even the most important reliever has a much smaller impact on the game than most players, no matter how badly Bell has challenged that wisdom early this year.