If you have not had a chance to visit Marlins Park for a Miami Marlins game, you certainly need to. As you know from my own review, the park is beautiful and has a good variety of amenities for all of your fan needs. But as just your average fan, I was not able to visit all of the parts of the stadium that I would have liked to see. There were certain parts of the stadium that I did not purchase access to, and certain places you simply are not allowed to enter because, well, they are not really seats to begin with.

Luckily for us, Miami Marlins outfielder Giancarlo Stanton has done a great job of showing off some of the other parts of the stadium that fans like me have not accessed or simply do not have access to. He was nice enough to show us these parts during games as well. Let's go follow some of his home runs around to check out the different areas of the stadium!

Out in Right Field

Oddly, Giancarlo chose a weird place to start our tour, as he initially took us to, of all places, the center field garden. Well, not really the garden per se, but more like the little hallway next to it. It certainly was not the most scenic start to the stadium tour, though it still garnered a lot of positive cheers. 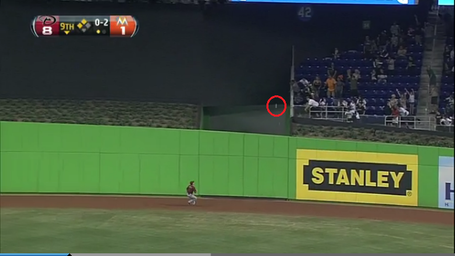 That home run took us into that alley, but I wanted at least to see the bushes in center field. Luckily for us, Stanton had a few more fun surprises in his tour in store for avid viewers.

After hitting that right field area, Stanton took us back upstairs with an eye on a couple of drinks. As you might have guessed, there is no better place to grab a beer at the stadium than the very place sponsored by a beer company. Stanton figured no one up at the Budweiser Bowtie Bar would mind if he bought a round for everyone, so he dropped in. 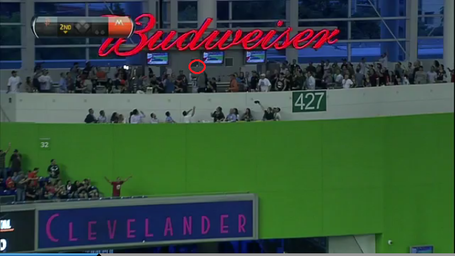 Sure enough, the fans were excited to have Stanton come by. They certainly did not expect him all the way up there, some 430-plus feet and high up on the big green wall in center field. That is a pretty hefty climb for anyone, but Stanton made it look awfully easy.

Heading Down the Steps

After a round of drinks, Stanton took us down the long flight of steps to bring us over to the Clevelander. We noted the large green wall that he just scaled to get to the Budweiser bar, and it looked even larger when standing next to it. 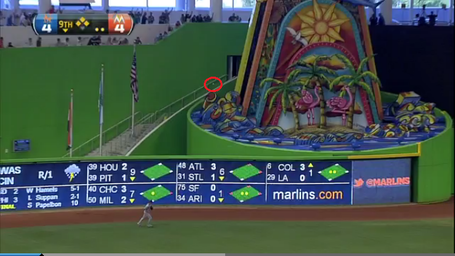 Of course, no inside tour of the park would have been complete without an inside look at the home run sculpture, aka the Monstrosity. Stanton knew that everyone wanted to see it, so he immediately brought us over there for a first-hand look. 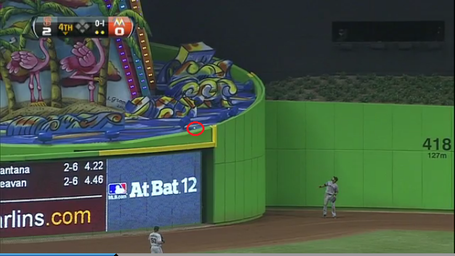 The crowd was fired up because it was the first time anyone had even gone into the depths of the Monstrosity in center field, so that was an exciting part of the tour. Little did we know that it would get even better than this as we continued the Home Run Tour.

We walked down the last few steps and finally got a chance to enter the Clevelander. Stanton took us over there and bought another round for the crew, and it was an exciting thing to witness. 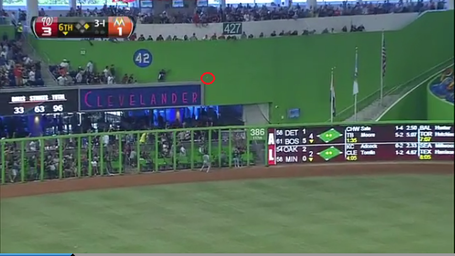 We did not exactly go into the Clevelander pool with that part of the tour, but we did get to bounce around a little inside the bar, grab a few drinks, and of course, enjoy the scenery. The ladies were there, naturally, and they certainly enjoyed seeing Stanton come by. You know who was also there? Heath Bell! Dude was serving up some drinks.

As the last part of our Home Run Tour, Stanton took us to an area that we thought was not all impressive to finish up. I mean, who finds a generic scoreboard above the left field seats all that interesting. But Stanton pointed out something quirky about the scoreboard and its structural integrity and engineering. He certainly pointed out that a baseball could do some damage to it. 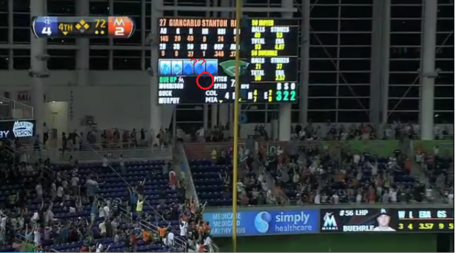 After Stanton's visual display and explanation, we all marveled at the scoreboard in absolute awe. Stanton was completely correct in ending the wonderful tour on such a high and powerful note. We certainly will never look at that scoreboard the same way again.

After that, the tour was over, but Stanton did mention that in future tours, there would be more stops. After all, there were so many places still left undiscovered by home run balls off his bat, and this stadium is just brand new to the world of baseball. Soon enough, Giancarlo Cruz-Michael Stanton would visit all the spots in the park with home run blasts, and this tour would be certain to be longer and even more enjoyable.