The Marlins played solid overall baseball on a warm Memorial Day afternoon, besting the Nationals in the first of a three game series. The offense was almost entirely powered by the middle of the order, as Hanley Ramirez, Giancarlo Stanton, and Logan Morrison all had strong days at the plate. Carlos Zambrano helped out by not embarrassing himself, while the bullpen threw three fantastic innings to hold the lead. 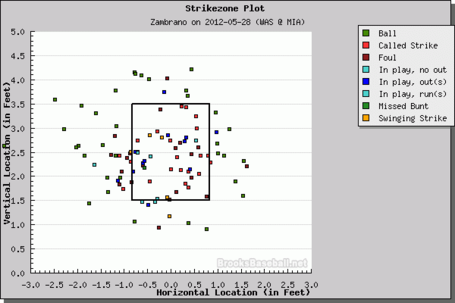 Carlos Zambrano has been a pleasant surprise for the Marlins, posting a respectable 3.00 ERA in 66.0 innings pitched. Meanwhile, Chris Volstad has been one of the worst pitchers in baseball, with a 7.46 ERA and -1.2 rWAR. So far the Marlins have come out ahead in that trade.

Zambrano appeared strong through his first two innings, generating a couple of strike outs and not allowing any walks. But in the top of the third inning, pitcher Jordan Zimmerman hit his first career home run off Zambrano. The Nationals then strung together two singles in the fifth inning, followed by Ryan Zimmerman double to left-center.

Zambrano found his way out of the inning and pitched through the sixth, but manager Ozzie Guillen strangely decided to leave him in the seventh inning. The decision proved unwise, as Zambrano allowed a walk and a single, forcing Guillen to bring in relief pitcher Dan Jennings.

While Zambrano struggled to contain the Nationals offense, the Marlins found ways to score off Jordan Zimmerman. Logan Morrison tied the game in the fourth with a lead off home run. Hanley Ramirez singled three times and scored on a Giancarlo Stanton bomb to left field.

All of the Marlins' offensive efforts may have been for nothing if it weren't for the tremendous performances in the bullpen. With two runners on and no outs, Dan Jennings caused Bryce Harper to fly out to left, where Coghlan slid and caught the ball. Edward Mujica was brought in and induced a double play ball from Ryan Zimmerman on one pitch.

Mujica continued to dominate in the eighth inning, striking out two batters and setting up the ninth for closer Heath Bell. Bell has been the source of much heartache and trauma for Marlins fans, but he proved effective yesterday, striking out Rick Ankiel and Carlos Maldonado, before ending the game on a Corey Brown fly out.