From a very powerful organization complaining about one of the features of Marlins Park to Giancarlo Stanton breaking one of the scoreboards of the stadium, the brand-spanking-new venue gets a lot of attention in this week's #FishStripes.

Let's start with this week's Play of the Week, which indeed is Stanton's huge fourth-inning grand slam Tuesday against the Rockies:

Stanton's moonshot down the left field line left this souvenir on the scoreboard from Business Insider: 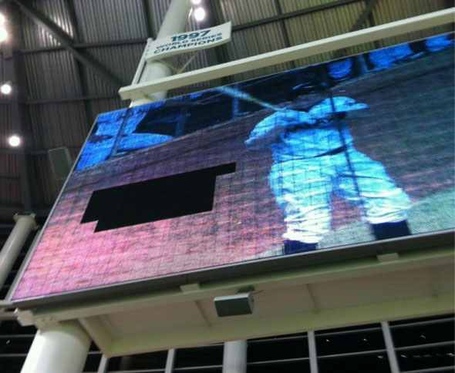 The scoreboard is working just fine despite it getting a small little "black eye" from the team's hottest hitter.

On that same night, the Marlins hosted a Social Media Lounge Night, where some of the top tweeters and social networkers met to network while enjoying a baseball game. Fitting we should use our Tweet of the Week from Tuesday night's event (this one from the team's official account):

Over 600 tweets were posted during the event on the night and even gained some attention from MLB Fan Cave, as seen in the TwitPic above. To apply to be a part of the next #MarlinsSocial event, click here.

Our Players' Tweet of the Week comes from Stanton, and it involves this play between he and Logan Morrison:

LoMo's attempt to dodge my throw home tonight was hilarious. Someone hook me up with that video.. it'l be a good one for @IntentionalTalk

Even though Intentional Talk didn't respond to Stanton directly, they did talk to a predominant figure of Miami's club, Ozzie Guillen.

Guillen also had to say this about his powerful, white-hot hitter:

Manager @OzzieGuillen on the power of the @Marlins @Giancarlo27_: "I don’t remember anyone who can hit the ball that far besides Jim Thome.

The manager of the Marlins also came out to support a good cause this weekend during the Giants series:

Now to another controversy at @MarlinsPark:

PETA comes out with a claim that the aquarium in the backstop is a danger to those fish with the noise and the potential that a ball could break the glass. Instead of buying an ad in the newspaper or on one of the local TV stations, they bought a commemorative brick to get their message across. Here's a video from @Buzz60:

The brick is located in the East Plaza.

Miami enters this week firing up divisional play welcoming the Nationals today through Wednesday and the Phillies for a three-game weekend set.