Despite a strong pitching duel, the Miami Marlins turned in a nice offensive performance against the San Francisco Giants and one of their best starters in Madison Bumgarner. Bumgarner was good, but once again the Fish blew the game open with one good inning and took a decent lead. When the lead dissipated just enough to put the game in "save rule" range, the Marlins entrusted Heath Bell for another ninth inning, and yet again he failed the team. The Fish had to go to another reliever for the second game in a row to pull out a tight situation after Bell came close to blowing a save.

Chipping Away in the Third

The Marlins put together nine hits against the Giants, but only three of those hits went for extra bases. With the exception of one run in the seventh inning manufactured by Giancarlo Stanton and Logan Morrison on back-to-back doubles, the club has had to chip away at opposing teams, and as of late the Marlins have been able to do so with the so-called "big inning." The third inning against Bumgarner was a good example. Take a look:

The Marlins did not have a play that "broke open" the game during that inning, as they drove one run in with a single by Hanley Ramirez (+0.087 WPA, or an 8.7 percent increase in the chance of victory) and got their two other runs from a grounder that resulted in an out and almost a double play (+0.080 WPA). Despite the chipping away aspect of that inning, it was still quite an accomplishment, as the Marlins retook the lead and provided a three-run cushion to starter Mark Buerhle. In total, the Fish picked up a 31 percent increase in their chances of winning this game in that inning, which is more important than the impact of any one play.

Giancarlo Stanton did not hit any home runs today, though that comes of as more of a surprise given how good his month has been. Still, Stanton still went two for three with two doubles and scored a run following a second double. He also got some respect from the pitchers on the Giants' staff, in part because Stanton was a bit aggressive with his swings. 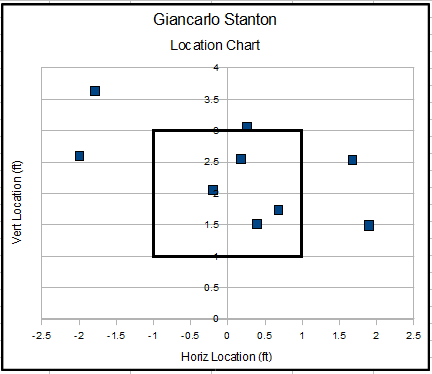 Heath Bell came in to close the door on the Giants, but for the second straight evening, he struggled enough with a three-run lead to force manager Ozzie Guillen's hand and force him out of the game. Bell walked two men and allowed a base hit and left the game with the bases loaded and only one out.

Remember earlier in the week, when Bell's location was much better, Well, today it was the exact opposite of "better." Witness the raw data. 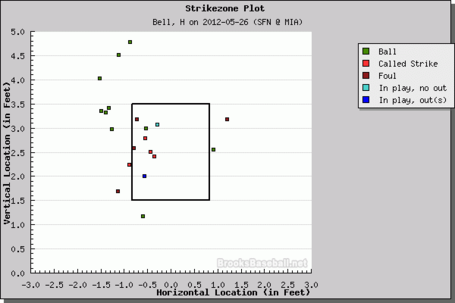 That spotting is just awful, with way too many pitches up in the zone and a good half a foot outside to the Giants hitters. That location looks worse when you look at where the ball was supposed to go according to John Buck's glove placement before the pitch. Here are a few bad examples: 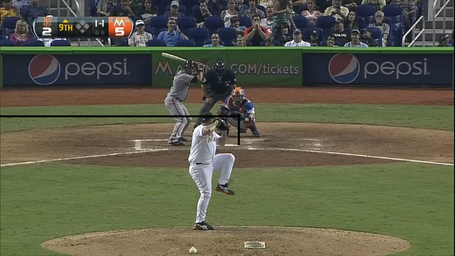 You can see that Buck wants this pitch low and away against Angel Pagan. The level of his glove is right at the knees. Here is where that pitch ends up. 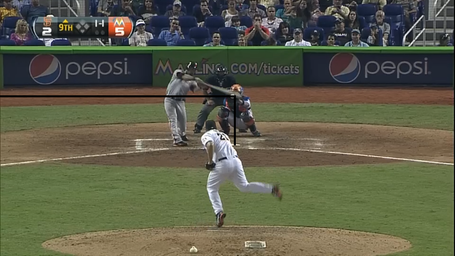 How drastic is that difference in location? That pitch tailed into the zone and elevated, leading to Pagan's single up the middle. That elevation problem was there all night. Take a look at this set up. 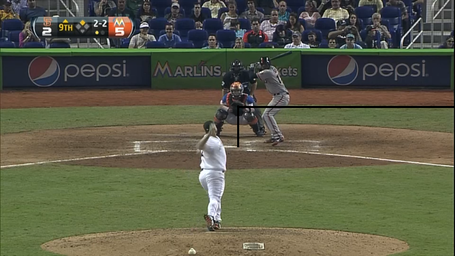 That pitch is supposed to be on the inner half, maybe a little lower than where I caught it. Look where it goes. 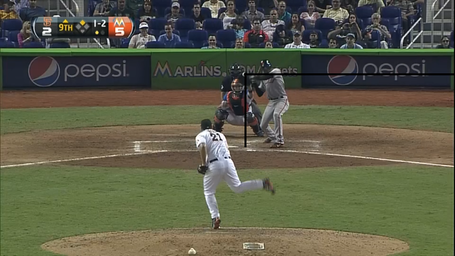 That is up around the neck of Joaquin Arias. Clearly not what was intended. And this was not an isolated incident, as you can tell from the chart. Here is the very next pitch, the 2-2 to Arias. 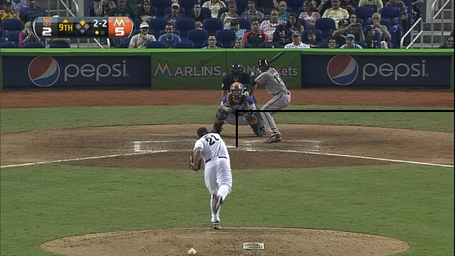 Again, low and on the inside part of the plate. And again, here is where it ends up. 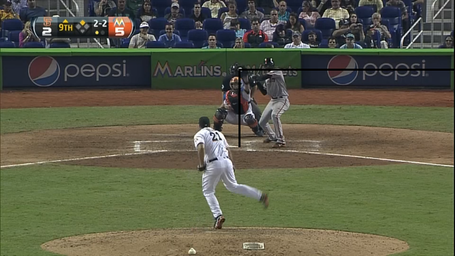 Almost a mirror image from the previous pitch. If you watch that inning, you will see at least two more of those types of poor, elevated misses by Bell, which led to walks to both Arias and Aubrey Huff. Both walks were ugly, as Bell missed so badly there was no shot of any hitter chasing either pitch. With the bases loaded, Guillen had no choice himself, and he correctly pulled Bell in favor of Randy Choate, who got a fly out and a strikeout to end the game.

If there was one positive to note here, it was that Bell threw some excellent curveballs in this game. He spotted three curveballs beautifully in the zone, and those all went for pinpoint strikes, so there was that bonus for the Marlins. Previously, Bell had more or less been burying all of those pitches in the dirt, where no hitter would come close to swinging on them. Today, Bell at least dropped them into zone effectively.