Share All sharing options for: Heath Bell More Effective In Latest Save

Last night, the Miami Marlins scratched out an early three-run lead and maintained that until the eighth inning, when Edward Mujica allowed three hits and a run without getting an out and a slew of Marlins relievers had to appear to hold the game to a one-run lead. This meant that, in the ninth inning, the shaky Heath Bell had to show up again to make the save. Marlins fans waited with bated breath, but Bell turned in his third straight save in as many opportunities.

So what made this save a little different than the others? Well, Bell looked sharper tonight than he did in his previous saves, and that is worth taking a look as Bell continues the road to recovery.

Bell has been eminently hittable as of late, but he has previously had issues with control as well. After all, he has walked 12 hitters in 16 innings after only walking 21 in almost 63 innings last season. Part of the issue that we had been seeing with Bell was that he was struggling to keep the ball down in the strike zone. When his pitches tended upwards in the zone, he was getting beat not only by walking hitters, but by also allowing juicy pitches up and over the plate.

Last night, as he had in the last few outings, he at least has been putting those pitches a little lower and a littler more in the zone.

The location in particular here is important. A good number of those pitches either hit the outside or inside corner or just missed, but the important thing is that he was going for the corners and hitting the spots.

For example, here was one instance where he drastically missed John Buck's desired spot. This was against Carlos Gonzalez. 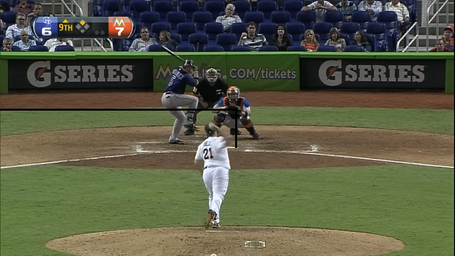 The cross-hair shows you where the pitch was supposed to be. Here is where it actually went. 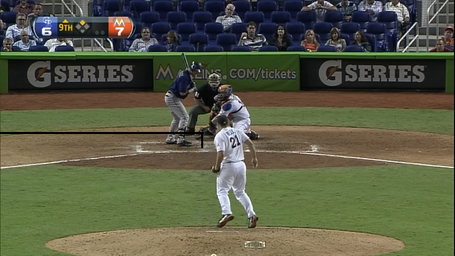 Obviously not the intended location, and that has been an issue thus far for Bell. However, the pitch that eventually retired Gonzalez was right on point with what Buck signaled. 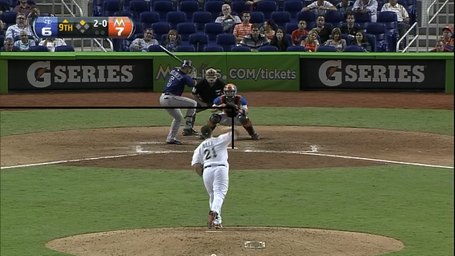 Here is where the pitch went. 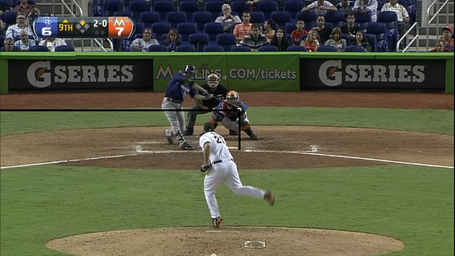 Maybe slightly outside of Buck's target, but well within effective range and just nicking the strike zone. This continued throughout most of the PA we saw from him. Here's the location Buck wanted on the 0-1 pitch against Troy Tulowitzki. 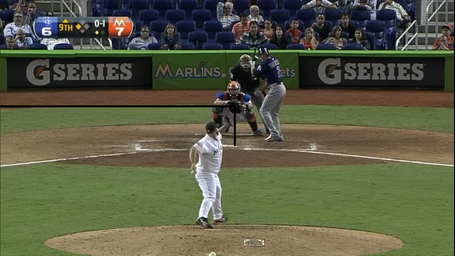 Here's where it went. 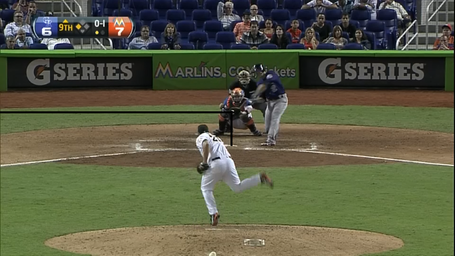 That one tailed a bit towards the plate and perhaps a bit lower, but it was close enough to the location and beat Tulowitzki for Bell's only pseudo-whiff (it was a foul tip).

A couple more of interest. Here is Bell's first pitch to Todd Helton, which went for a low strike. 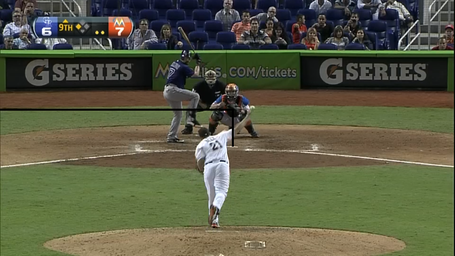 Here is where it went. 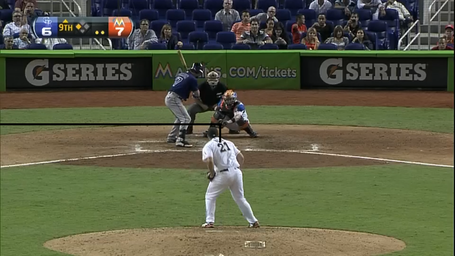 There he missed, as the ball tailed back over the plate, but at least he missed low. The Bell of a couple of weeks ago would have missed that pitch thigh- or belt-high.

FInally, here's the payoff pitch against Helton for Bell's first strikeout since his clean outing in Atlanta. Here is where Buck wanted it. 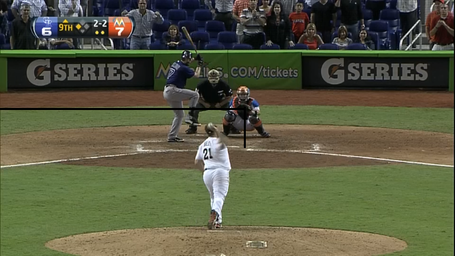 Here is where it ended up. 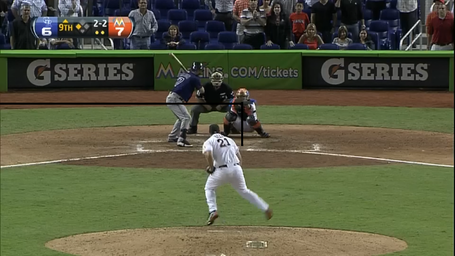 A little higher, as that pitch was belt high at the end, but the horizontal location was perfectly on point, and it ended up being the called strike that ends the game.

A look at those five pitches shows you that Bell is not quite there yet in landing his locations, but he has gotten better. When he has missed, he has rarely missed by tailing his pitches towards the plate, instead moving them away. When he has been high in the zone, he has missed by enough not to get beat at least, which is more than we can say about even his last few outings. Outside of the hanging curveball that he threw to the leadoff man Jordan Pachenko, this was most impressive Bell looked all season.

While Bell did record a strikeout this game, he still did not record a whiff from the Rockies. Bell did get a foul tip into the glove from Tulowitzki, but no clean whiffs. In the past, he had recorded whiffs on 10 percent of his fastballs and 12 percent of his curveballs, but those numbers are way down to seven and eight percent on those pitches respectively. One of the potential problems may come back to location; Bell has been unable to get his curveball down to a good location; 54 percent of his curveballs have been thrown for balls this season versus a career rate of 40 percent, and you could see in the few curveballs he threw last night that the location of those pitches is still uncertain.

Because Bell cannot find the placement on those pitches, hitters are just laying off of them. Hitters are swinging at only 20 percent of his pitches outside the zone versus a career rate of 29.4 percent. With his location off for most of the year, hitters are laying off those breaking balls that previously were getting them to swing poorly and potentially whiff.

Whatever the issue may be, this is still a major problem for the Marlins. Bell's location, at least for his fastball, has been better, and that should go a long way towards improving his effectiveness. But without a curveball or some semblance of a breaking ball, Bell is essentially throwing 94 mph flat baseballs at major league hitters, and we know that eventually those major leaguers will catch up. In fact, it seems like they already have. Until Bell can start throwing that curveball for strikes, hitters may not be fooled and may just try catching up to the fastball and foul it off until they can find something good to swing at. The road to recovery is on the way for Bell, but that lack of whiffs still looms very large over his ninth inning work.