Last night started off very poorly for the Miami Marlins; the team allowed a four-run cushion to dreaded Marlins killer Jamie Moyer without even lifting a bat. The Fish were down 4-0 faster than you could say Giancarlo Cruz-Michael Stanton, and the 25,155 fans that showed up to last night's game knew immediately that this was going to be a long climb back up.

Luckily, it was not really that long, thanks to the very same Giancarlo Stanton previously mentioned. In fact, after the Marlins chipped away with a run in the third inning, they opened it up in the fourth with this mighty swing.

I watched that at least 20 times last night. Strip Club With Stanton loved this clip so much, he inspired others to write haikus about it. SB Nation's Jeff Sullivan wrote an excellent piece in which he described this moment as one of those times that "baseball was exactly as one thinks it should be." The money quote:

What makes Jamie Moyer amazing is that every time he takes the mound, you can't help but expect him to get killed. Monday night, he faced a killer of baseballs with the count full and the bases loaded. Moyer threw a pitch over the plate, and seconds later, shit broke. Giancarlo Stanton stood in against Jamie Moyer, and he hit a baseball literally hard enough to break something.

The point is that, sometimes, you use the numbers to analyze and break down a player's strengths and weaknesses. Sometimes you look into how a player like Stanton might struggle because he has struck out 28 percent of the time for his career. I can mention how difficult it will be for most players to put up decent hitting numbers while striking out that often unless the player has an extreme power stroke. I can discuss how pitchers may adjust to that player with their approach and how he would need to adjust to battle them.

But sometimes, you just have to sit back and appreciate all that is happening.

The above clip is amazing for so many reasons. For one, it was encouraging to see Stanton make foul contact on a number of difficult pitches that were mostly out of the zone. Another thing that was encouraging was that he was able to work the count on a pitcher who had to eventually throw a strike because of the bases loaded situation (though getting a favorable call on the pitch before the slam did help). In fact, just watching Stanton work through that count was encouraging.

But perhaps the most classic part of that grand home run was that he knocked out a scoreboard temporarily. There is no doubt that the left field scoreboard was damaged temporarily following Stanton's blast. 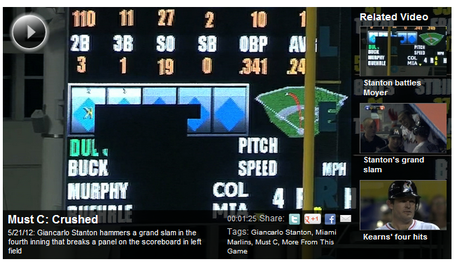 That is ridiculous. Who does that? When do you hear about those type of things? That is why we have to appreciate a man like Giancarlo Cruz-Michael Stanton, because at any moment, he can hit a ball so hard that it will knock out a scoreboard. We patiently await the day that Stanton hits one into the Budweiser bar 460-some feet to center field or into the Monstrosity in center field, causing it to glitch and run backwards when it is lit up.

A monster bomb to center field that gets into that Budweiser bar may not be all that surprising when you see just how far this home run could have gone were it not for that poor scoreboard. From ESPN's Home Run Tracker: 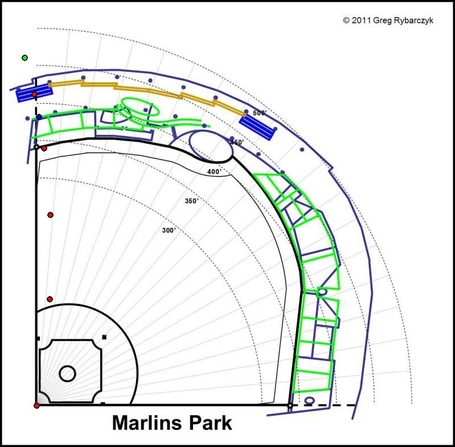 The blue object with the red dot on it is the unfortunate scoreboard that was plastered by Stanton's home run. The green dot a little ways down is where the ball would have landed had nothing impeded its path; this is calculated using simple physics regarding the balls angle of trajectory and speed off the bat. Based on that estimation, Stanton's home run would have gone 462 feet without the barrier of the scoreboard. That distance is tied for fifth longest in "True Home Run Distance" this season, along with this Yoenis Cespedes blast. Also, Stanton's home run flew at a rate of 122.6 mph, which apparently is the hardest hit home run in the Home Run Tracker era. He beat this season's previous best, a homer by Jose Bautista on May 15, by almost five miles per hour. Wow.

Stanton now has eight home runs in the month of May. A couple of those homers were cheap shots that barely cleared the fence, though they were hit like laser beams targeting bullpens or low-lying fences. However, I think it is worth revisiting his greatest hits of 2012 thus far to appreciate just how awesome Stanton is.

Remember when we are all concerned about his lack of power and he did this.

That had a true distance of 425 feet. You had to figure that, if it was more to the left of the stadium, it would have landed plush on the Monstrosity.

That had a true distance of 429 feet. That definitely would have hit the Monstrosity.

And then of course, there was this beautiful grand slam. Nope, not last night's.

You know I am always up for a grand slam versus the New York Mets, especially if it is of the walk-off variety and of the 432-foot true distance variety as well. This ball hit the stairs past the Monstrosity. Wow.

One thing that is worth mentioning is that all of the problems that seemed to plague Stanton in the month of April dissipated once he got into May. At the start of the season, Stanton was striking out at a 26 percent clip, which was lower than his career and his previous season's numbers. However, in this month, Stanton has struck out in only about 21 percent of his PA, while he has forced walks in almost 14 percent of his PA. Stanton has made more contact during this month (72 percent rate) and, perhaps notably, pitchers have once again chosen to avoid him, as they have thrown pitches into the zone at a 44 percent clip versus the 50 percent clip in April. Maybe a few of those bombs contributed to that hesitance.

Remember when Stanton was hitting balls on the ground, thus having a hard time getting those long balls? He has hit grounders in only 23 percent of his balls play, filling the rest of that time with hard-hit line drives (31 percent) and fly bals (46 percent). This month, he has hit homers in 31 percent of his fly balls, which his brought his seasonal HR/FB rate to about 22 percent. His career mark is at 24 percent, so he once again is right in his wheelhouse in terms of fly ball power.

I am not sure how Stanton has rejuvenated his swing and returned his season so quickly to the Stanton of old. But man, sometimes you just do not bother to look for the why and sit back and enjoy the show. Giancarlo Stanton, thanks for the awesome show thus far in May.