Miami Marlins Will Not Move Marlins Park Fences In

Share All sharing options for: Miami Marlins Will Not Move Marlins Park Fences In

Miami Marlins president (and general source of ire for Marlins fans) David Samson said earlier this week that the Marlins have no intentions of moving the fences in in response to a good deal of criticism about the depth of the outfield. Despite a lack of home runs in the stadium, he and the team apparently seem pretty happy with the park.

"Here's how we built it: We want it to be pitcher-friendly, but fair to hitters who get all of it," Samson said. "No cheapies. If you get it, we want it to go."

Before the season began, we pointed out that the dimensions of the park were similar to that of the offensive black hole that is San Diego's Petco Park, and thus far it has played that way to some extent in terms of home runs. As reported in the article, only 21 home runs have been hit in Marlins Park thus far in 16 games, while 35 homers have been hit in 22 Marlins road games. If you prorate those early home results to 20 games, you would see 29 home runs hit, which is 83 percent of what was hit on the road.

Of course, we should be very wary as to what these early results really tell us about the park.

For example, one would think with the fewer home runs that both the Marlins and visiting teams have hit in Marlins Park that run scoring would be down. but this early in the stadium's life, that does not seem to be the case. In fact, according to Baseball-Reference, the Marlins have an extremely high offensive park factor when you just look at the 16 games played at the park just far. B-Ref has the Marlins single-season park factor listed at a whopping 116, meaning teams are scoring 32 percent more runs at Marlins Park as of now.

That discrepancy does not change when you look at the splits in terms of batting lines.

Of course, none of this means anything; we are only 16 games into Marlins Park. While we may be certain that home runs are likely to be down in the stadium, we have no idea just yet whether the rest of the offensive game will go up due to those wide-open spaces in the outfield or whether all sorts of hits will be suppressed enough that offense will go down. There are parks such as AT&T Park that were odd enough in their dimensions that, though they appeared pitcher-friendly, they turned into decent, mostly fair ballparks. With more time, we will find out if Marlins Park has truly become Petco East, and if it does become like that, the team will make the appropriate decisions. As of now, I have to agree with Samson in that it is not an immediate concern.

You know there are numerous people who cannot wait, for whatever reason, to see baseball fail in south Florida. For one reason or another, people really do dislike the Marlins organization, likely due to their perception of team ownership. This article brought to my attention the "embarrassing fashion" in which Marlins Park attendance has "petered off." It highlights the fact that tickets to Marlins games are currently going for as low as $2.00 on StubHub.

Let's see just how "embarrassing" this dropoff in attendance is. Never mind the fact that the Fish currently rank 14th in the majors in average attendance at just a shade over 29,000 a night. 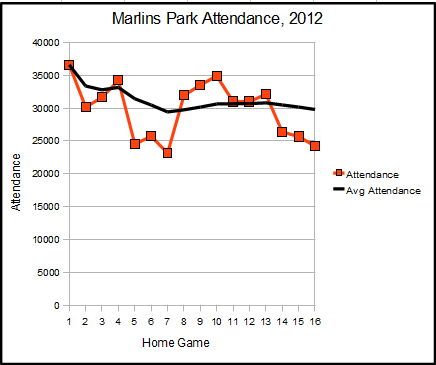 The team is averaging 29,000 and has more or less hovered around that area for a little while. The team drew above 30,000 for two of the New York Mets games, with the third falling victim to the Sunday afternoon Miami Heat / Indiana Pacers series opener. The team also drew over 30,000 for all of the Arizona Diamondbacks series, despite the fact that the Marlins were struggling and that, unlike in the case of New York, there are not a large number of Arizona transplants here in Florida. In fact, I would say that the Marlins are drawing about as expected given the team's decently competitive status in the NL East and its competition in the NBA playoffs and the hot Miami Heat home draw. Of course, this still has time to drop further possibly, but right now, this is far from a disappointment.