The Miami Marlins played this game as closely as possible, but a grand missed opportunity in the eighth inning sealed the team's fate, as the Fish lost 3-2 to the visiting Pittsburgh Pirates. Starter Anibal Sanchez was his typical strong self, having given up only six hits, but because they were bunched decently together, the Pirates were able to scratch out three runs from those hits. The Fish, on the other hand, were unable to bunch up their hits significantly enough to "manufacture" more than a run from the Pirates.

One can hardly fault Anibal Sanchez much for this outing. He induced 11 swinging strikes, and those strikes came on a good variety of breaking pitches that he used as out pitches. Sanchez also pounded the strike zone, as evident by his pitch locations.

He was able to get 16 called strikes versus 21 balls, which yields a ball to called strike ratio of 1.3 to one. Given that he was in the zone so often, no wonder he was able to strike out five guys and only walk one, thus continuing his strong string of good peripheral performance. He made one poor pitch to Rod Barajas which allowed a solo home run, one of the few mistakes he made during the evening. Outside of those pitches, Sanchez was golden and only needed the offense to step up and bail him out.

It was difficult to witness the eighth inning unfold for the Marlins. After Jose Reyes singled to get one base and start the inning, Omar Infante put up this lovely PA to follow with no one out. 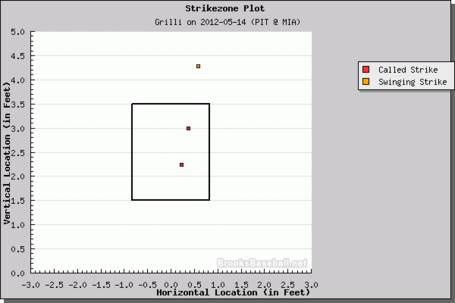 It is a rarity to see Infante strike out so easily, but it was difficult to watch him take the approach he did. The pitch he swung at and missed was almost a foot above the traditional strike zone and was almost assuredly a foot over his own personal zone.

After the bloop single by Ramirez, the Marlins were unable to bring Reyes in from third with one out, as the team followed with Logan Morrison's strikeout on some good pitches by reliever Jason Grilli and Giancarlo Stanton's pop up after another poor PA. 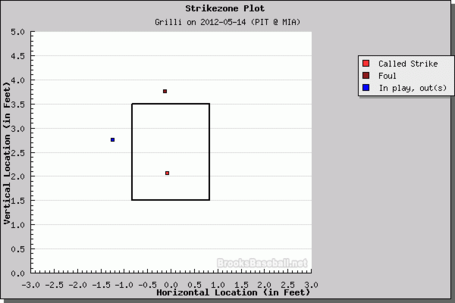 Here we have yet another three-pitch PA with two swings out of the zone and a lot at stake. The Marlins were unable to remain disciplined against the strike-throwing Grilli, so he got ahead and exploited their chasing ways. Only Morrison at least managed to see more pitches and avoid the inevitable third pitch out of the zone. The team ultimately couldn't deliver the run, and the game was lost.