On Sunday afternoon, Emilio Bonifacio went three for four at the plate with two triples as part of the Miami Marlins' 8-4 victory over the New York Mets. The day before, he had no hits, but drew a walk in one of his PA, his 17th walk of the season. In 157 PA, Bonifacio has draw 17 walks, the same amount that he drew in 201 PA in 2010. His 17 walks this season represent half of the number of walks he drew in all of 2009, a season in which he had 509 PA. ZiPS projects that, by the end of the season, Bonifacio will have walked 59 times in 631 PA, which represents a walk rate of 9.5 percent.

A couple of years ago, after Bonifacio had that terrible 2009 season, I noted how Bonifacio could become a better player and reach what was likely his ceiling as a slap-hitting middle infielder with tons of speed. My advice was for him to better develop his game on the basepaths and become the type of runner who could garner ten or more runs above average on the bases (including steals) during the season. He also needed to become more patient and draw more walks, because getting on base was the only way he could utilize his speed and it would be one of the few ways he could make up for his distinct lack of power.

Well, in 2011, he showed both aspects. Baseball Prospectus's Equivalent Baserunning Runs (EqBRR) had Bonifacio worth eight runs above average on the bases last season. FanGraphs had him worth seven runs just in terms of taking extra bases. And in terms of patience, Bonifacio walked 59 times in 2011 as well, representing a 9.2 percent walk rate and a drastic improvement from his 2009 rate of 6.7 percent. And the growth that he showed in 2010 and 2011 has continued into 2012; we may be witnessing the final evolution of Emilio Bonifacio as a player.

Bonifacio has been successful in his first 18 attempts of the 2012 season, and that feat certainly has not gone unnoticed. His rate of success on the basepaths has improved since 2009, and he has improved slightly in avoiding outs on bases in other fashions. In 2009, he was picked off eight times in 201 stolen base opportunities; in 2011, that number dropped to six pickoffs in 281 opportunities. Avoiding pickoffs and adding better success on his steals (86 percent success since 2010) has made Bonifacio a bigger threat on the bases and helped his team significantly.

How did Bonifacio get all of those extra opportunities on base? He did so by being more patient at the plate as the years progressed.

You can see that Bonifacio just has not changed in terms of contact rate. Instead, he has just been progressively swinging less and less at pitches, and pitchers are helping in that they have maintained about a 50 percent rate on pitches in the zone against him. Because they have not shifted their approach against Bonifacio, he has simply benefited from taking more and more out-of-zone pitches for balls and converting them into walks. Indeed, this season Bonifacio has swung at the lowest number of out-of-zone pitches while still maintaining a swing rate above 50 percent on in-zone pitches, making his approach ever more selective.

Let us take a look at Bonifacio's selectivity in more graphical form. Thanks to FanGraphs' Jeff Zimmerman, we have a site where we can input a player and get their heat maps for swings and taken pitches for each Pitch F/X season. Baseball Heat Maps provides us these excellent charts, and we will use them here with Bonifacio. I broke down Bonifacio into three "eras," corresponding to his 2009 season, his 2010 and 2011 seasons, and his 2012 season. The charts we see here are his swing heat maps against right-handers from those three years. 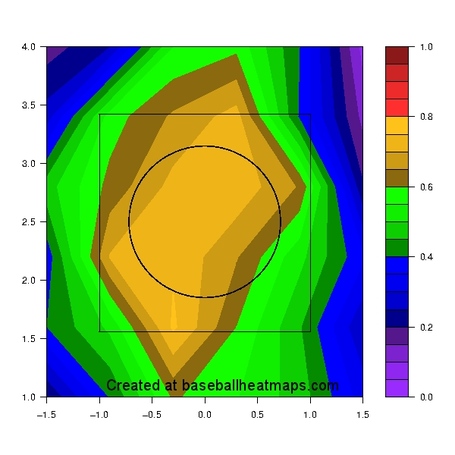 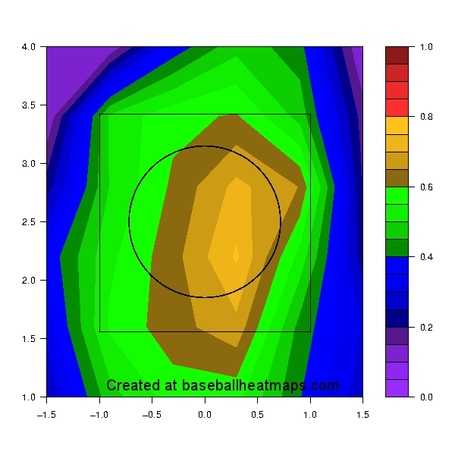 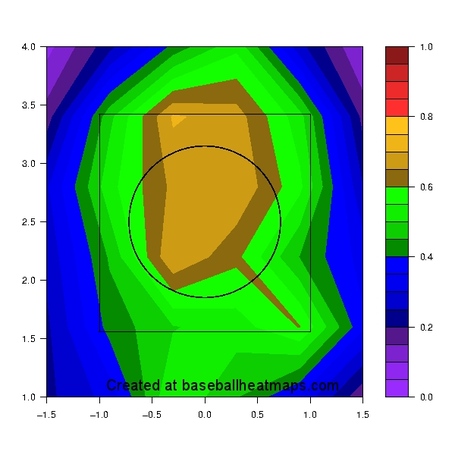 Note: All maps regressed to the league average to some extent in order to avoid wonky looking graphics due to small sample sizes

Visually, you can see Bonifacio's increased patience quite clearly. In his 2009 season, he swung at anything and everything, and beginning in 2010, he began cutting back on those swings and narrowing his zone of interest. After 2009, they made a distinct effort to cut down on his swings up in the zone, so it seemed he focused more on avoiding those pitches up in the zone. This year, he has avoided low pitches and swung at those higher pitches, Bonifacio's 50 percent strike zone (the area in which he swings at about 50 percent of those pitches, indicating approximately the edge of the zone in his mind) is a littler higher in 2012 than it was in 2011 (look at the light green region), but in each of those seasons he has cut down primarily on his pitches swung at either inside or outside the zone.

These changes do represent legitimate growth by Bonifacio, and I certainly would not have expected to see this in him by 2012. But is this sort of growth enough to be a quality major league starter? I often propose the example of Michael Bourn as the ceiling for Bonifacio's capabilities, and Bonifacio has more or less reached Bourn in terms of production at the plate. Generally, Bourn has had a higher BABIP for his career, so we expect him to be a bit better than Bonifacio in terms of his slash line. Both are highly proficient when running the bases, so there is no sense differentiating their baserunning value. It is difficult to imagine Bonifacio drawing more walks than he already currently does, as players with his sort of weak power profile do not demand that much respect from pitchers; since 2010, of the players who have drawn walks in more than 11 percent of their plate appearances, only two players (Daric Barton and Brett Gardner) has posted an ISO even remotely comparable to Bonifacio's, and no player has posted that kind of walk rate with a sub-.100 ISO.

So Bonifacio is not likely to improve on the things that I initially pointed out a long time ago. He has reached his ceiling as an offensive contributor, being able to take a walk and get on base often enough to compensate for his low power and high dependence on BABIP. He is an elite baserunner among the best in baseball. What kind of value does that carry? In the past, I have said that Bonifacio could become "Michael Bourn without the defense," but unfortunately Bourn is only about a four- or 4.5-win player with his Gold Glove defense. In addition, Bonifacio has thus far proven to be a bit of a liability on defense no matter where he is placed, though I still hold hope for him doing well in center field. So perhaps we see a limit for Bonifacio as a two- to 2.5-win player in the majors, and perhaps that is what we can expect going forward as a starter, but improvement cannot be expected any further.