Last night, the Miami Marlins won another extra innings affair by finally breaking through after a number of rough PA with runners in scoring position. In the 12th inning, the Marlins were able to put runners on first and second with two before pushing through the important runs. Omar Infante delivered the eventual game-winning runs with an up-the-middle single with the bases loaded.

But how did the Marlins get the bases loaded in that situation? Following an Emilio Bonifacio strikeout on four pitches, John Buck stepped up to the plate with the opportunity to drive the run in, and while he was not able to deliver that run, he staved off the end of the inning by drawing a clutch walk to load the bases. Let's take a look at that walk. 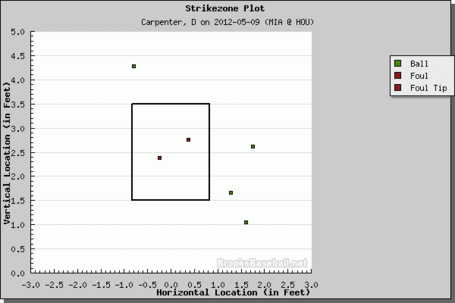 Of course, the situation made it more exciting than it actually was, as this seemed like any other PA. But the truth is that Buck did a very good job of laying off a number of enticing pitches on his way to a walk, his 14th of the season.

In a way, this is a prototypical walk for Buck, as he has been doing this all season long to the surprise of almost everyone. Since signing a three-year deal worth $18 million total, Buck has gotten a lot of slack for being an undisciplined hitter with a penchant for strikeouts. Certainly Buck does strike out often (22.7 percent strikeout rate in 2012 and 23.5 percent career), but in the last two seasons, he has upped his walk rate to 10.2 percent in 2011 and a very high 15.9 percent this season. How is he doing it? His approach at the plate has drastically changed.

Waiting For His Pitch

John Buck has suddenly increased his walk rate in part by continuing a trend he began last year of simply swinging at fewer pitches.

Buck has drastically reduced his swing rate dramatically this season. The drop in swings is somewhat equivalent in both in and out of zone pitches, so this change has helped Buck to stay away from pitches that he used to hack at to little avail. Whereas before Buck would swing away at more than 50 percent of the pitches he saw, with an above average rate of swinging at out of zone pitches, Buck has decreased that problem over the last two years and has suddenly become a very patient hitter. Combined with an increased contact rate in 2011 that has carried on into 2012, Buck has drawn a very large number of walks and dropped his strikeout rate into the low 20 percent range.

Take a look at the distribution of swings by Buck this season. 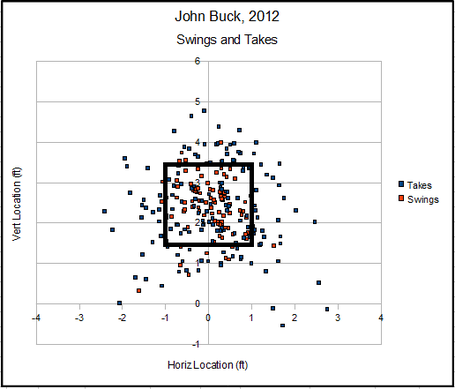 Compare that to this jumbled graph (sorry gang, still haven't figured out how to do heat maps off of Pitch F/X data!) of Buck's swings and takes from last season. 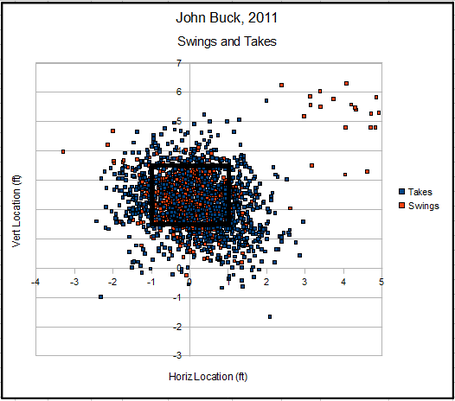 Even with the messy graphics, you can tell that Buck has been laying off more pitches this season than last. In particular, he looks like he has laid off of more pitches inside than he has in other locations. Buck still is swinging at low balls, so pitchers have been able to fool him there, but it does not seem as bad on pitches in on the hands.

An interesting point to be made here is that this does seem to be something the Marlins are doing as a team. The Marlins are 12th in the majors in walks drawn, but their plate discipline numbers are actually fairly high up there in terms of low swing rates. The team has swung at 42 percent of pitches as a unit, fourth lowest in baseball. Only the Twins, Mets, and Indians have swung at fewer pitches than the Marlins this season. The numbers are similar in terms of in- and out-of-zone pitches as well, as the Fish have swung at the lowest number of in-zone pitches (57 percent, tied with the Twins) and the tenth-lowest number of out-of-zone pitches.

Perhaps the team has been taught to be more patient. For some hitters, it is certainly a benefit; we have seen with Buck and Emilio Bonifacio that taking a more patient approach can lead to better results due to either a lack of value on their balls in play (Bonifacio and his weak power) or a lack of contact ability (Buck). But for guys like Jose Reyes, perhaps a more aggressive approach reaching the midpoint between his career performance and his current passive approach would be a good thing, simply because his high contact rate ensures more generally positive results on in-zone pitches. For some of the Marlins, they need to better learn selectivity rather than just patience at the plate. But for the more hitting-challenged Marlins, taking more pitches is not a bad idea, if only to extend PA and wear out pitchers in addition to allowing them to make their own mistakes. If this is an approach they are looking to use team-wide, credit Eduardo Perez for making that move.