The stadium was pretty. The Star-Spangled Banner was pretty. The introductions (and the ladies!) were pretty. The debut of your 2012 Miami Marlins was not. The Marlins put out an anemic offensive effort in tonight's game and Josh Johnson, while at times effective, allowed a few too many bloopers to land or squib through before stabilizing into a solid outing. The Marlins debut and take their first loss of the season to Kyle Lohse and the defending champion St. Louis Cardinals.

Josh Johnson made his first major league start since May of last season, and early on, he could not shake the cobwebbs. 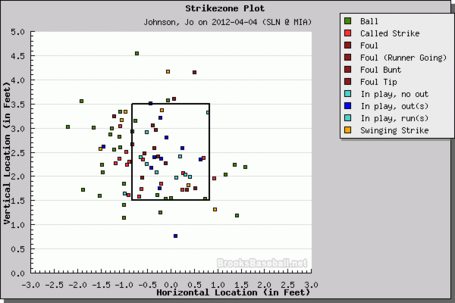 This chart shows a little bit of the problem that Johnson had this time around. Of the pitches that hitters allowed through, Johnson threw 30 balls and only 14 called strikes, giving him a balls to called strike ratio a little over two to 1. Your league average is around that area, and we expect a better performance from an elite starter like Johnson. In addition, the pitches he did locate in the zone were often in the center of plate, with more than a few of them being hit hard as a result. Almost all of the 10 hits he allowed were on balls that were in the juiciest part of the plate (check out the pitches in light blue).

Johnson's slider appeared a bit contentious in its effectiveness given that two of them were hung out to dry and thus well hit. Johnson obviously are trying to avoid getting hit hard with hanging breaking balls, but two of his sliders were hit for line drive singles and another was well hit for a lineout. The slider in terms of movement on average, however, did not compare poorly to his typical slider; in fact, there was a bit more "sink" to it on average in this game (average vertical movement of 1.3 feet) than there usually is (2.1 feet career), so perhaps we can chalk that up to location rather than lack of bite. He did induce two swinging strikes of the 13 that he threw, but a 15 percent whiff rate just is not enough on a pitch designed to get swings and misses. This contributed in part to his inability to finish hitters off; Johnson saw 19 two-strike counts and converted on only four strikeouts.

Now, not all of Johnson's outing was his fault. Clearly, the defense played a role in helping and hurting his situation. Many of his balls in play were not hard-hit, save for perhaps five of them. The Marlins were lucky on one to convert it into a lineout, but in many of the other balls in play that got through for hits, the defense was simply in the wrong place at the wrong time. A couple of those balls were merely squeakers that got by or floaters that dropped, and while those may be frustrating to watch, they certainly do not signal the end of the world.

Ultimately, the goal is for Johnson to improve a bit on a few things. He picked it up in terms of stuff and movement later on in the game, as evidenced by his three-strikeout fifth inning. A couple of balls simply did not go his way. While his velocity was a bit down overall (down to an average of 92.9 mph from a career 94.0), this is not too alarming early in the season. We'll chalk up this start to early season readjustment.

The offense, on the other hand, could not have looked much worse against Kyle Lohse. With the exception of Jose Reyes (who got two of the Marlins' four hits), Logan Morrison, and Giancarlo Stanton, the Fish had few balls well enough to be considered effective. Reyes had some line drives and sharply-hit ground balls, and Stanton's two big fly outs would have been home runs in many parks, but ultimately few other balls were well-struck. It was particularly frustrating to see Emilio Bonifacio pound light grounders up to the pitcher and Gaby Sanchez watch two strikeouts go by him in an attempt to bait out Lohse.

All told, Lohse dominated the Marlins offense, and it was not a particularly fun event. But the team has often had issues with soft-tossers, though usually they are of the lefty variety. Lohse's velocity is down to just around 89-90 mph, and his offerings are designed to have the team put the ball in play. Tonight, the Fish were off balance at the plate, but this should not happen every evening. It was not the prettiest offensive outing, but I am fairly certain we will see better days.

Well, it would not be the debut of Marlins Park without some oddities of the team's brand new stadium. And while the home run structure did not go off, we did see a few - well, unique things regarding Marlins Park.

First, there was this (all H/T Big League Stew): 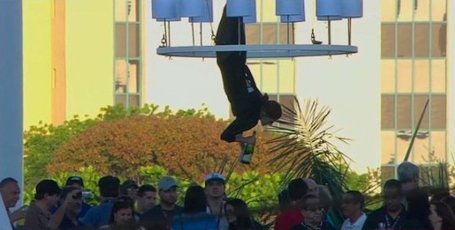 This picture, isolated from context, is odd, but I would not have thought much of it. But this champagne chandelier also made her television debut on the ESPN telecast, and she flashed a very eerie smile that added to the oddity of having a champagne chandelier in the first place. A true Marlins Park oddity.

Of course, for every oddity at the bar, there are some equally powerful, well, niceties. 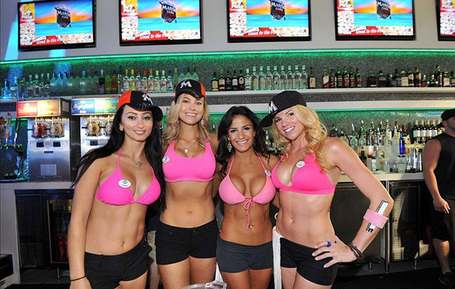 This is a PG site, but I'll never complain about this visage at the stadium, tacky home run structure and all. Well played, Marlins, well played.