The Miami Marlins were coming off an exciting comeback victory and were looking utilize the momentum of last night's win to propel them into another strong showing against a relatively new pitcher to the major league scene. It helped that the Marlins were sending their staff ace Josh Johnson to the mound, but as has been the case for much of this year, a victory is never assured no matter the pre-game situation for the Marlins. Johnson allowed five runs in a peripherally strong outing, the bullpen surrendered three more runs, and some late game power did not come close to keeping the Fish from losing this game.

If you saw this table of Johnson's performance today, you would think nothing differently about how well he threw. Aside from a poor outing in terms of velocity, nothing we see here seems all that different than what we have seen in the last few outings. When you look at Johnson's control, you see that he threw balls versus called strikes at almost a two-to-one ratio, which is at least average. He did not attack the strike zone like he did in his past start, but his location was not terrible all in all. 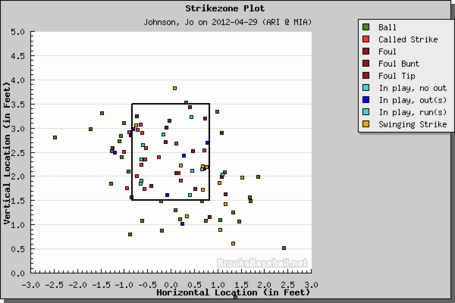 Most of the pitches on which he missed, they were missed low, where they were not as likely to hurt him. His locations were not perfect in the zone, but given that he did decently on called strikes, there is not much about which to complain. It was particularly impressive what he did with his non-changeup pitches. Johnson's curveball earned him five called strikes versus two balls, while his fastball got him seven called strikes versus 11 balls; these ratios were quite impressive. Only his changeup failed to generate positive results, as he threw seven balls and did not draw a single strike from the pitch.

Johnson's whiffs obviously were high given his high strikeout rate. Johnson mowed down eight batters in 5 1/3 innings pitched, and he did so by dominating both righties and lefties with his slider. Out of his 35 sliders thrown, seven went for swinging strikes and only seven other pitches were even contacted, meaning Diamondback hitters whiffed on half of the swings they took on his slider. Of those seven whiffs, five came against lefty hitters, which is odd given the fact that the slider is traditionally a pitch used against same-handed hitters. Three more swings and misses came from his fastball, and in total Johnson induced 12 whiffs in 103 pitches, a swinging strike rate (out of total pitches) of 11.7 percent which is more reminiscent of his career rates.

So despite all of this, how did Johnson give up five runs? Despite a very solid ground ball rate of 53 percent, the placement of Johnson's balls in play were simply not lucky. A couple of swings timed in just the right fashion put the ball in places the defense simply was not. After watching the entire game, it was hard to recall a single ball in play that was hit hard, with the possible exception of Lyle Overbay's double in the fourth inning. Most of the 10 hits that he did allow were bloop shots that happened to be bunched together to produce runs, but those sorts of things will occasionally happen. Johnson could not be faulted too badly for what was otherwise an excellent outing.

It took a while, but at least one positive did come out of today's game versus the Diamondbacks: Giancarlo Stanton finally broke out of his season-long slump to hit his first home run of the season. The shot went a long ways, as it was hit to almost dead center field, where the stadium is at its deepest. He hit it just left of the right center field seats, into the grey hallway next to the garden, and it was a no-doubter from the start.

The interesting thing is that Stanton has been muscling up fly balls for a little while now. In the opening game of the season, he ran a long, warning track out to right field. Today, he hit a 385-foot blast to left field off the end of the bat that ended up being an out at the wall. So when Stanton is connecting, he is certainly connecting hard. Right now, it is a question of his plate approach and how well he makes contact, but with his skill, his drought should not last very long.

The bullpen surrendered three runs today, all at the hands of Mike Dunn, who struggled yet again in relief of the starting pitcher. Dunn delivered a ground out for the Fish against the lefty Geraldo Parra after replacing Johnson, but he proceeded to give up a double to Jason Kubel after intentionally walking Justin Upton to get to the lefty Kubel. He then walked Miguel Montero and allowed another double to backup Cody Ransom. He escaped the inning, but not after turning an ugly game even uglier. The rest of the pen performed admirably, but Dunn's inability to find the strike zone forced him to throw predictable pitches that were smoked.