Anatomy of a Heath Bell Blown Save

Share All sharing options for: Anatomy of a Heath Bell Blown Save

Yesterday afternoon, Heath Bell received his first work assignment from the Marlins in the past week; he was tasked to come in and preserve a one-run lead against the New York Mets so that the Fish could salvage a game in their three-game series. What followed was one of the ugliest blown saves we have seen in a while and yet another ugly notch on the disgusting belt that so far has been Bell's career as a Marlin. Bell's four walks in seven batters faced represents one of the worst possible ways a pitcher could have managed to toss an almost 80 percent chance of winning a game.

Bell's latest setback in his time as Marlins closer deserved a more in-depth look, so I took to Brooks Baseball and looked up his game to see if Pitch F/X had anything enlightening to tell us. 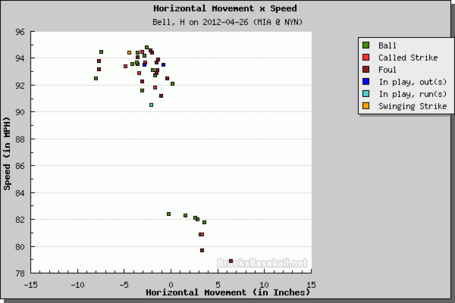 The chart and these numbers all look pretty normal. Those "sinkers" are likely just misclassified fastballs, and at that point you are looking at Bell's typical pitch usage of fastball and curveball. Both pitches are traditionally good against either side of the platoon, so Bell has little need for a changeup. The fastball velocity thus far has been down this season, but we are talking about about a half a mile per hour drop in velocity. While this may have something to do with Bell's struggles, I think it is a small concern amid possible bigger ones. 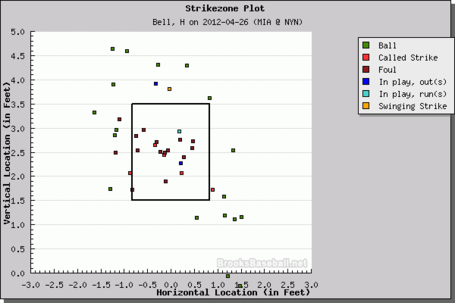 These pitches were the ones that were thrown in the four-walk game yesterday. These locations do not look all that excessive, but compare them to the ones of his last successful save outing against Chicago. 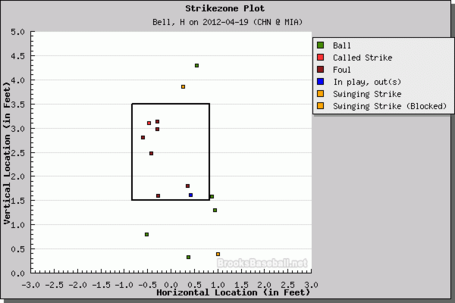 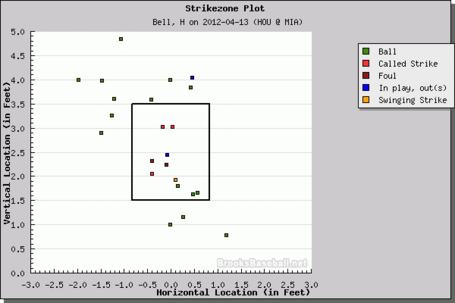 In both instances, Bell's location was significantly up in the zone compared to his more successful game. Having checked some of his other blown saves, however, I noticed no significant difference in his location in that respect; for example, only six of 22 pitches in Bell's three-run blown save against the Astros were outside the zone, yet he looked awful in that save attempt as well. It seems that, when Bell loses control and location, he does so up in the zone rather than outside or down primarily. This does seem consistent with his previous locations, as evidenced by this heat map from 2011 involving all of his fastball to right handed hitters. 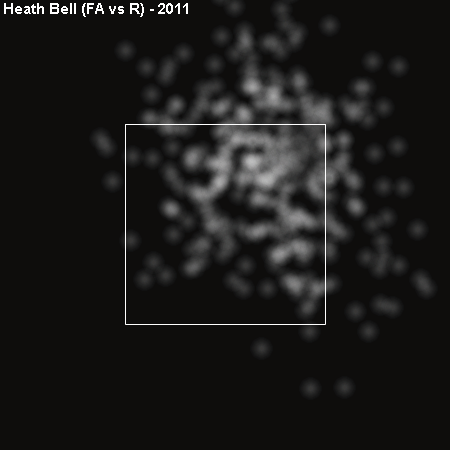 So this time around, the issue was simple: Bell could not find his location. Of the 46 pitches he threw yesterday, only 18 pitches were in the traditionally defined Pitch F/X strike zone. But in the past, this has not been the only problem, and there should be some concern on the part of the Marlins that there was a reason Bell suddenly lost this type of control. In other outings, the issue was clearly a concern with hittability, and while some of that may just be small sample size and bad luck, the Fish should concern themselves a little about his problems. Yes, it's still early season, so there is no strong determination of what is going wrong, but the Marlins do have a lot riding on Bell's arm; the team is paying him at least $27 million over the next three years to be their closer, so any investigation on mechanical or timing changes should be looked at.

On my end, if Bell's struggles continue, we will probably delve into his Pitch F/X numbers to see just what is going on with his pitches. For now, the sample size of pitches is just too small to get a reading, and it is completely possible and even likely that all this was was a series of setbacks that just happened to occur within weeks of each other rather than months. Admittedly, Bell has rarely had these sorts of setbacks before; he has only once before this season walked more than three hitters in an outing, and that was when he broke into the league with the Mets in 2007. So even though these are blown saves just like any other, we are entering some uncharted territory. But panic is not what should be happening now, though Bell's struggles should still be considered.