Four Possible Draft Choices for the Marlins This June

Share All sharing options for: Four Possible Draft Choices for the Marlins This June 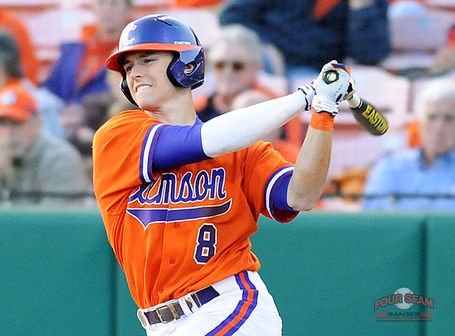 The 2012 MLB draft is going to be crucial for the Miami Marlins organization. Despite what happens at the major league level, the Marlins need to keep acquiring young talent to improve one of the weaker minor league systems in the game. Strong draft's can lead to above-average major leaguers, and even championships. Take the St. Louis Cardinals for example. Since 2000, the Cardinals have only had one losing season. A lot of this is due to their great work at finding major league talent in the draft. The Cardinals Opening Day roster featured fourteen players acquired through the draft. The Marlins goal should be to find successful players in the draft similar to what the Cardinals have done.

For the 2012 draft, the Marlins own the ninth pick. The overall talent level of this year's draft is pretty disappointing compared to last year but there are still some future superstars that will be drafted. Obviously, we have no idea who is going to be available when the Marlins are picking, but I have come up with two college players, and two high school players, that the Marlins might consider drafting.

Devin Marrero, SS, Arizona State University: Marrero is a 6'1'' 180 lb. shortstop who is considered an all-around player. He is the best overall shortstop in the draft and his defense in particular is very advanced for his level. He has above-average range at shortstop and a very strong arm. He has hit for average at every place he has played but never for power. His speed is not overly impressive but it is good enough to be a #2 hitter in the majors.

In high school, Marrero was the team captain of a Florida team that not only won the state championship, but the national title as well. After high school, Marrero was drafted in the 17th round by the Cincinnati Reds. Instead of becoming a professional, Marrero chose to play for Arizona State, one of the best college baseball programs in the nation. In his first year as a freshman, Marrero was a first-team freshman All-American. Last year, Marrero won the 2011 Pac-10 Defensive Player of the Year award.

Deven Marrero has had a rough season. At the start of the season, most people would be surprised if someone knowledgable said that he would fall to #9. I saw him projected to go as high as third overall in some places. However, Marrero has had serious problems making solid contact with the ball this season. Even though his numbers (.287 BA in 2012) might not be indicative of his struggles, scouts have definitely noticed. He went from being projected to hit up to fifteen homers a year, to now a more reasonable five.

Overall, I think the effect Marrero's 2012 season has had on his draft stock is almost absurd. Just because he has struggled this season shouldn't erase the fact that he has hit in every preceding year. Even if he never hits for power, he could still possibly be a slightly above-average overall hitter and when you combine that with his defense, you have a very good major leaguer for many years. If Marrero falls to the Marlins at ninth, they should definitely consider taking a chance on him despite already having two perfectly capable MLB shortstops. Drafting players because of positional needs is never a good idea.

Currently, Arizona State is ranked 26th in the nation. If the Sun Devils continue to play at a high level of baseball, Marlins fans should keep an eye on Deven Marrero during the College World Series this June.

Richie Shaffer, 3B, University of Clemson: Richie Shaffer is 6’3’’ 200 lb. third basemen who might not be able to stick at third base in the future. Nonetheless, Shaffer can hit for power and his tools will find a way to get playing time no matter what position he's at.

At high school in North Carolina, Richie Shaffer did it all. He was a pitcher with a sub-2.00 ERA, and a hitter with a .400+ batting average. That led to a 25th round selection by the Dodgers back in 2009. Not surprisingly, Shaffer decided to attend the University of Clemson instead of start his pro career. As a freshman in 2010, Shaffer had a .409 OBP%, and he homered roughly every twenty-two at-bats leading to a .525 SLG%. As a sophomore, Shaffer displayed more power (Thirteen home runs, almost twice as much as he had as a freshman.) and was reaching base almost half of the time. For his freshman and sophomore years, Shaffer had been used primarily as a first baseman.

This year, in his junior season, Richie Shaffer officially packed up his bags and moved to third base. I hate when people say that someone packed up their bags. What does that even mean? Am I the only one who doesn't have bags lying around waiting to be packed? And who uses bags when their moving? Anyways, Shaffer's results at third base have been mixed. There are still plenty of questions about him defensively, but considering this is his first full season at third, what he's been able to accomplish is pretty impressive. Some people see him moving to the outfield or back to first base. For me personally, I think whichever team drafts Shaffer should give him at least one year in the minors to see if he can figure out how to play a better third base.

Other positives about Shaffer's game are his athleticism and power. Matt Garrioch, of fellow SB Nation blog Minor League ball, thinks that Shaffer could hit .270 with 18-20 homers. That's barely enough production for a first basemen, but for a third basemen or outfielder, that would be pretty impressive. I think the most underrated part of Shaffer's game is his on-base ability. So far this season, Shaffer has a .505 OBP.

Shaffer's stock has shot up so far this season. At nine, Shaffer might be a stretch but I wouldn't be surprised if the Marlins took a chance on Shaffer. The on-base skills and power potential are going to be very appealing for any team picking in the first round. I really like Shaffer. I might have a slight ACC bias, but I think that with his advanced learning curve and already above-average power, he is going to be a superstar.

Clemson is currently ranked 31st in the nation, so Shaffer will be another name to watch for in the College World Series.

Max Fried, LHP, Harvard Westlake HS (CA): If the Marlins are picking at number nine, and Max Fried is still on the board, he wouldn't be a surprising pick for Miami to take a chance on. Fried is pitching for probably the best high school baseball team in the state, and he's part of a historically good Harvard-Westlake rotation. Fried is a 6'4'' lefty whose fastball tops out at about 94 MPH. He throws from the 3/4 arm slot, and has pretty impressive mechanics for a high school pitcher.

Fried still has room to grow in his frame which is very appealing for MLB teams. He also has a potential above-average out pitch in his curveball. I really don't know that much about Fried other than that. Chris Crawford of MLBDraftInsider.com said in his most recent chat that Fried's ceiling is as a #1 starter, but he will more likely be a number two because of his inconsistent velocity.

Fried is definitely the best left-handed pitcher in the upcoming draft. From what I've heard, he could go anywhere from fourth to fifteenth. If the Marlins select Fried, he will become their second consecutive high-school pitcher chosen in the first round. High school pitchers are never a sure thing, but with Fried's potential, I don't see the Marlins passing on him.

Albert Almora, OF, Mater Academy HS (FLA): Almora is a 6'2'' righty outfielder. He plays outstanding defense, and is pretty strong for a high school athlete. He has the potential to be a five-tool player but I don't see the hit tool being as strong as some perceive. Baseball runs in his bloodlines, and his cousin Manny Machado is one of the top prospects in all of baseball.

Almora's defense is supposedly good enough to where he just has to hit average in order to be a fine major league player. However, Almora looks to me like one of those prospects who adds power after a couple of professional seasons. At Almora's peak, I think he could hit .280/.340/470 with ten to fifteen stolen bases. Combined with above-average defense, that's a very impressive player.

If Albert Almora becomes a major league regular, I will be very disappointed if he is not given a nickname is not something to do with monkeys. According to this MaxPreps article, Almora has a jungle gym in his backyard complete with a fifty-foot rope. How many high schoolers’ can boast that about their backyard?

There's a lot to like about Almora. He has a very high ceiling, and most people believe that he has the proper work ethic required to reach his potential. Almora is committed to the University of Miami but I'm guessing with a first-round selection, he will head into the murky world of professional baseball.

All of these four players have a chance to be drafted by the Marlins with the ninth pick. If I had to choose one of these players, I think I would take Shaffer because of his bat and potential. The Marlins would be making the wrong choice if they drafted a player purely based on positional need. 2012 is an extremely important draft for the future of this franchise.