The Miami Marlins suffered another devastating loss yesterday after an incredible pitching duel between Josh Johnson and Johan Santana. Both pitchers appeared invincible through the first six innings, striking out a combined twenty batters. The scoreless tie was broken in the top of the seventh when Gaby Sanchez hit a double over the head of left-fielder Mike Baxter, scoring Giancarlo Stanton from first base. But the Marlins could not hold the lead, surrendering a run in the bottom of the inning and again in the eighth.

Santana was incredibly dominant last night, but not in the fashion that baseball fans have come to expect. His fastball velocity sat at 87-89 miles per hour, not the mid-90s velocity he had before his shoulder surgery. So why then was Santana able to strike out eleven batters, walk only two batters, and allow just three hits? 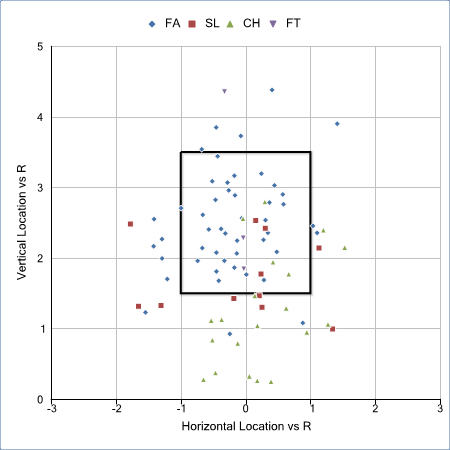 Santana kept the fastball mostly in the strike zone, while his change-up broke down below the zone. Only a few stray sliders and change-ups made it into the strike zone. The only pitch batters could hope to reliably hit would be his fastball over the plate, but if Santana's arm action is working properly, it would be next to impossible to distinguish the fastball from the change-up. The Marlins only run of the game came off of an 87 mile per hour fastball that Santana left right over the plate, allowing Gaby Sanchez to crush the ball to left field.

Josh Johnson was equally effective throughout the game, striking out nine batters and walking only one. His four-seam fastball velocity was up very slightly, from a 92.7 miles per hour average in 2012 to 93.1 miles per hour yesterday. In his article on Johnson's struggles, Michael identified Johnson's velocity as the primary difference in his performance this year opposed to previous years. Another difference in last night's game was Johnson returned to using his curveball, throwing the pitch fourteen times. Of all of his pitches last night, Johnson threw the curveball for strikes at a rate of 71.43%, more than any other pitch. But his most effective swing-and-miss pitch was the slider, yielding six swing-throughs.

The Lead Is Lost

After the Marlins took the lead in the top of the seventh, the Marlins attained a seventy percent probability of winning the game. That probability improved when Johnson's dominance continued into the seventh inning, retiring Daniel Murphy and David Wright. But Johnson proceeded to issue his only walk of the night to Lucas Duda, who would ultimately be the tying run. Manager Ozzie Guillen pulled Johnson and brought in Randy Choate, who then walked Justin Turner. Guillen came out once again and replaced Choate with Steve Chishek, who then walked Scott Hairston. The endless pitching cycle continued when Cishek was replaced with Mike Dunn. If this is making you dizzy, do not be alarmed - your experience is perfectly natural. Of course, Dunn walked Josh Tole, scoring Duda and tying the game.

All of Guillen's managerial hijinks could not preserve the lead, but Dunn managed to strike out Zach Lutz, keeping the game tied. Everything went south again in the eighth inning when Edward Mujica was brought in. Mujica allowed two singles, but was able to get two outs off a strike out and a bunt line out. The next occurrence was unfortunate and impossible to anticipate. Lucas Duda, the man who scored the tying run, hit a line drive that deflected off of Mujica and stopped in the infield grass. Kirk Nieuwenhuis scored and Mujica was removed in pain. The damage was done. The Marlins made an attempt to score off of Frank Francisco in the top of the ninth, but only Logan Morrison reached base with a walk.