Josh Johnson: Is There Cause For Concern?

Share All sharing options for: Josh Johnson: Is There Cause For Concern?

So far this season, Josh Johnson has been underwhelming through three starts. His strikeouts are way down compared to his career norms, and the only thing that has kept his peripheral ERA numbers like his FIP down is the fact that he has yet to allow a home run this season. When you investigate his component ERA numbers that regress home runs more towards the mean, his performance has been very un-Johnson-like to start the year.

I know three starts is just not a whole lot, but is there something we can garner from this? What has Johnson been doing wrong on a pitch-by-pitch level that is making his stats appear so sub par? One thing that may be able to help us find out is Pitch f/x, and it may be a good idea to take a look at Johnson's first three starts to see if we can learn anything.

To attempt some form of investigation, I looked at the pitches Johnson threw in his first two starts to right-handed hitters in 2012. So far, it is not a lot, only 76 pitches to right-handers thus far. As a comparison point, I looked at the 341 pitches Johnson threw to righties last season. I compared them in a few different ways to see if there were any changes to be noted.

Here is some of the basic data on what Johnson threw in 2011. 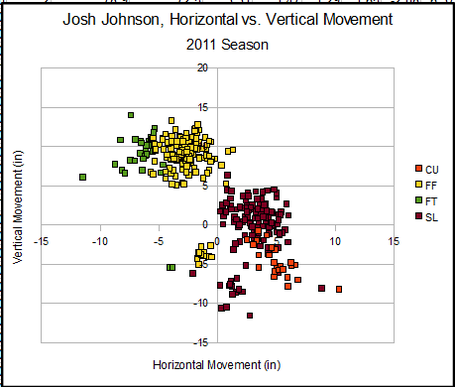 Compare that to his 2012 chart and numbers. 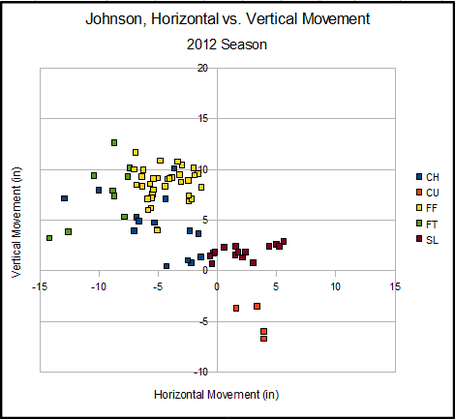 A couple of things stand out in the early going with Johnson's approach versus righties between the two seasons.

- Johnson has clearly eschewed the curveball in favor of his changeup this season. We had heard that he was shelving the curveball early in the season while he continued the road to recuperation from his shoulder problems. From what was said, it was more of an issue with resetting his mechanics to normal after a ten-month layoff and not wanting to continue working on new things rather than an injury issue that would prevent him from throwing the curveball. Nevertheless, he has gone to his changeup in more than a few instances against righties, and to poor results thus far.

- His velocity is clearly down. His four-seam fastball is down almost 1.5 mph in velocity. Ironically, despite that problem, his fastball has actually been a good thing thus far. Right-handers do not have a hit on his fastball, and he has a balls to called strike ratio of 9 to 7 on the pitch. Of the six whiffs he has induced versus righties, four are coming off of the fastball.

- The biggest problem we have seen so far is that his slider is being contacted a lot more often than it should be. He has only induced two whiffs on it thus far, with nine out of 12 of those contacted pitches going for balls in play. None of them have been hit hard, as they have all been singles or outs, but the 17 percent whiff rate on swings is highly underwhelming for a strong weapon In addition, his other problem has been his two-seamer, which he has yet to throw for a strike.

It turns out Johnson has had no issues with right-handers in terms of results. He is posting a 2.42 FIP and 3.38 xFIP against them, in fact. Other than a few extra base hits, many of which can be contributed to weak fly balls that landed during the St. Louis game, for example, he actually has done fine, minus the alarming lack of swings and misses.

The biggest problem so far this season has been against lefties. He has walked five and only struck out four so far this season after facing 39 such hitters. Usually, Johnson handles these sorts of hitters slightly differently, favoring more ground balls and fewer strikeouts with his changeup. However, he has taken a decrease in strikeouts to an extreme, as he has literally induced only two whiffs in 95 pitches in his first two starts. There was improvement in his third start overall, but the point stands that his stuff is not fooling hitters, especially from the left side.

Too Early To Tell

It is clearly a little too early to say much of Johnson's struggles, with only three starts on the table and two starts in this data set. Other than his velocity, nothing seems clearly out of the ordinary in terms of the basics, but the lack of whiffs indicates that something either is not moving well or is not being located properly. If Johnson continues to struggle, we will revisit this with more data 10 starts into the season, but for now, let us hope he recovers well.