There are three stories in this afternoon's tilt between the Miami Marlins and Washington Nationals. The first story involves the incredible pitching duel between Anibal Sanchez and Stephen Strasburg. The second story involves the very quickly developing heroics of Hanley Ramirez and Logan Morrison in the ninth inning. The final story involves the defensive miscues that led to the Marlins' extra innings loss.

If you liked pitching, you liked today's game, because both starters were on their game. Strasburg was excellent, throwing in the mid-to-high 90's in all six of his innings and striking out six Marlins. But Sanchez fired back in tow, striking out eight of 26 Nationals faced and not walking a batter. He varied his pitches, going to his fastball, curve, slider, and changeup as needed. His velocity was a little low, hanging out in the 90 mph area, but it made for it with effectiveness. 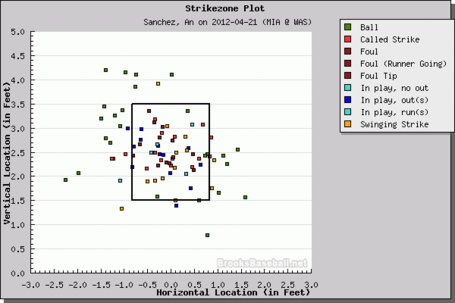 You can see from this chart that Sanchez hung out in the strike zone a lot in this game. Of the pitches that were taken, he threw 26 balls and 17 called strikes, an impressive 1.5 balls to called strike ratio (generally, you are looking for a ratio less than 2 to 1). Of the 85 pitches he threw, 56 of them were in the typically defined strike zone. It was no wonder that Sanchez did not walk any hitters, as he was pounding the zone in Ricky Nolasco-style fashion the entire game.

His stuff was also effective. His eight strikeouts were aided by 13 swings and misses. Those whiffs accounted for 29.5 percent of the total swings taken on his pitches and 15 percent of his total pitches. In both cases, that is a highly impressive total; Sanchez's pitches were fooling hitters all game, especially his changeup (six swinging strikes).

The only two problems he had all game were the two home runs allowed, and those came on mistake sliders. Both the mistake pitches had a little more "rise" or vertical break to them, indicating that they hung up a little bit more than his average slider for the game. Sanchez's average slider had only 0.9 inches of vertical "rise," while the two sliders that were hit for home runs had 3.2 and 1.9 inches of break.

Still, that would have been good enough to win the game for the Nationals had they been able to close it out in the ninth. Unfortunately, the Marlins finally made good on a number of situations with men on base and got the timely hit that pulled them tied. The Fish began the inning with about a six percent chance of winning the game, and that was almost certainly worse by the time Hanley Ramirez got down 0-2 on the count against Brad Lidge. But Ramirez took four straight pitches low and out of the zone and drew the walk that was worth seven percent of the Marlins' chances of winning. Then Morrison stepped up next and delivered a no-doubter into right field for his first homer of the season.

The ball was launched, and the best part about the video is that Ramirez knew immediately; he went immediately into a jog and pointed out of the park as the ball sailed and tied the game. Morrison's two-run homer pulled the Marlins up to a 50 percent chance of winning immediately, adding almost 37 percent to the team's odds.

But the baseball gods giveth and, occasionally, they taketh away in the same game. Despite the heroics, the Fish came up un-clutch on defense in the 10th inning despite decent pitching by Edward Mujica, who was getting through his second inning. Wilson Ramos got aboard with a lightly hit fly ball to center field, and then the critical error occurred when Gaby Sanchez fielded what appeared to be a routine double-play grounder and threw the ball a bit high for Jose Reyes, who could not catch the ball at second base and, as a result, saw the throw trickle slowly into the outfield. Instead of getting any outs on a rather simple play, the Marlins allowed runners on first and third with nobody out in the bottom half of extra innings.

Despite a hard-fought battle, this afternoon's Marlins game was a frustrating loss. The Fish could have come away with a chance at victory, but some mental errors at the end of the game handed the win back to the Nationals.