A Personal Visit to Marlins Park: The In-Game View

Share All sharing options for: A Personal Visit to Marlins Park: The In-Game View

Earlier today, we talked about my visit to Marlins Park before the game began, but of course, we had a (very frustrating) game that still had to go on. And while I did not get to tour as much during the game, I did get a few more interesting pictures during the game that I wanted to share, along with my thoughts on the Marlins during the frustrating loss.

After the Anthem was sung by a young girl with a surprisingly powerful voice, we awaited the Marlins as they prepared to enter the field. The first guys to step onto the field after the Astros were done with batting practice were the bullpen members. 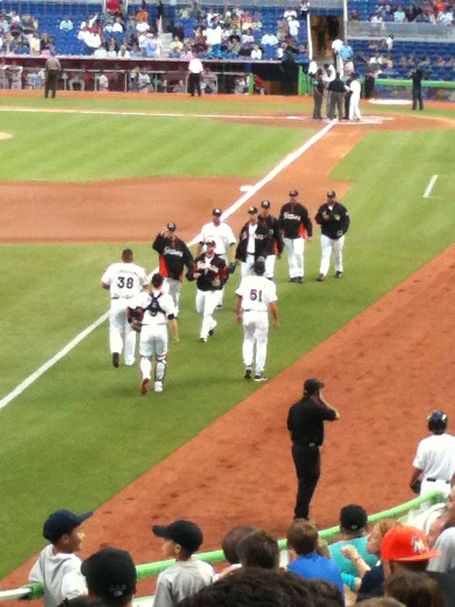 The pen made its way over to the bullpen and prepared to sleep through the first six innings as starting pitcher Carlos Zambrano hopefully made good on his second start of the season. With the rest of the Fish eventually taking the field, the first pitch was about to come and this blurry picture of Zambrano shows that quite, well, poorly. 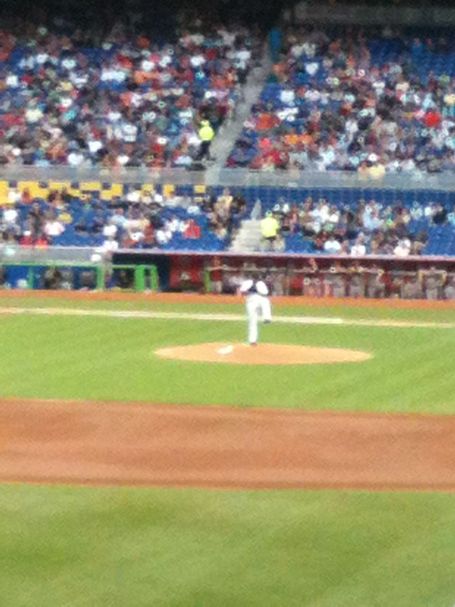 That is what I get for trying to zoom too close with my iPhone camera. Nevertheless, the game was on and the Marlins faced the Astros!

The first interesting thing I noticed (other than the fact that Zambrano was once again walking everyone in sight) was the cheering section for Astros outfielder J.D. Martinez. It was understandable that there was a sizable section of fans, presumably mostly family, that came out to see the Astros outfielder, as he was a product of Flanagan High School and Nova Southeastern University. Of course, Martinez grew up a Marlins fan, but now all of his family and friends were decked out in Astros gear and sitting somewhat close to our section. 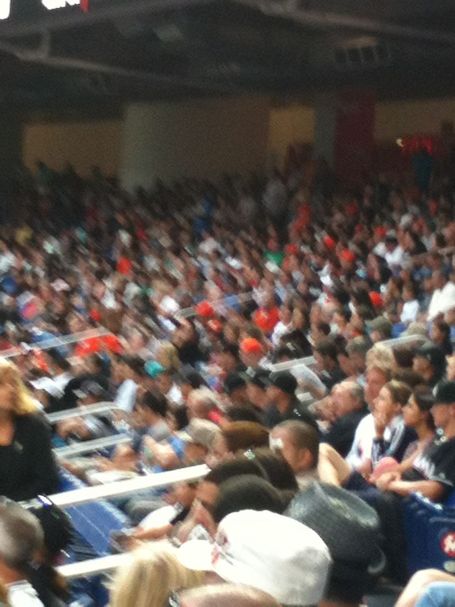 In the far back of that picture, his fans were loudly proclaiming Martinez's excellent play. What followed was a group of Marlins fans antagonizing the family of the native south Floridian. In the third inning, Martinez made a baserunning error and got thrown out at third base on a ground ball to Zambrano. In response, the Martinez section was brutally heckled, but as far as I could tell, nothing mean was said and the booing was mostly in sporting spirit. Of course, later in the evening, the Martinez section would be among the folks who got the last laugh on us Fish fans.

I was disappointed to once again see Zambrano's velocity take a dive throughout the game. After hearing the good news about his fastball touching 94 or 95 miles per hour (mph) on occasion during Spring Training, I was excited to see if Zambrano had gained some semblance of usefulness. Unfortunately, it seems that either Zambrano has immediately lost that velocity or that those reports were exaggerated, because he has not touched close to those numbers yet this season.

His highest velocity this season was at around 92 mph, but his average is a good deal less than his 2011 average of 90 mph, as seen on the chart (the green dots are the average in a given start). I barely caught a glimpse of a 90 mph fastball from Zambrano that evening, and that is a bad sign for the Marlins going forward. The good news is that he did seem to start similarly in 2011, with a little bit less velocity than usual before climbing back to a lower overall velocity than his usual norms. This is definitely something to keep watching, much like the Javier Vazquez situation from last season.

At some point during the evening, we discussed the possibility of getting a foul ball hit to us. For the most part, I did not expect a foul ball to come our way, even though our seats were decently placed for a foul ball. Fortunately for us, the Marlins obliged, as they hit a foul ball in our direction in the fourth inning. And when I say "in our direction," I really mean that at its most. The trajectory of this sixth inning foul ball would have placed it an arm's length away from my seat. I was so unprepared for such proximity to a foul ball that I did not leave my seat, but rather simply put out a hand towards the ball as it traveled within feet of me. Unfortunately for me, an older gentleman stood in front of me, and his hand knocked the ball to the ground.

When the ball hit the ground, so did he and I to an extent. I remained seated, as the ball fell and rolled underneath my seat. Yet this man was the heavier aggressor, as he went to the ground hard in chase. We wrestled with each other, his hand outstretched underneath my seat and his body splayed across the adjacent steps. I tried in vain to snag the ball before he got his hands on it. I tried to swat his hand away, but it was to no avail. The man got a handle on the ball, and after a few seconds, I yielded the battle to him. We had a good laugh about it and I shook his hand for a hard-fought battle. He complained that, in the fracas, he cut his thumb. I was able to at least get some good pictures along the way. 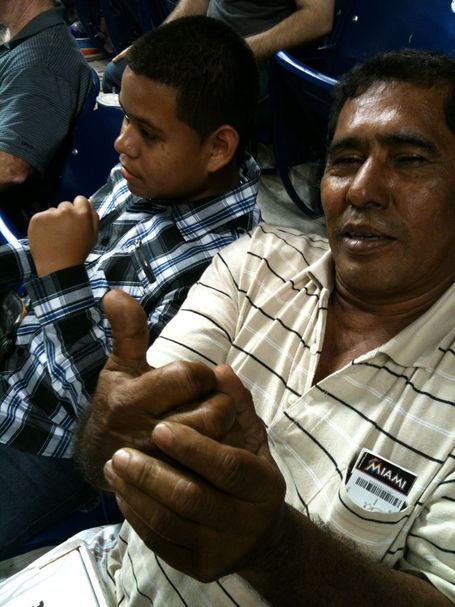 His son got the foul ball, which I guess was a nice touch. 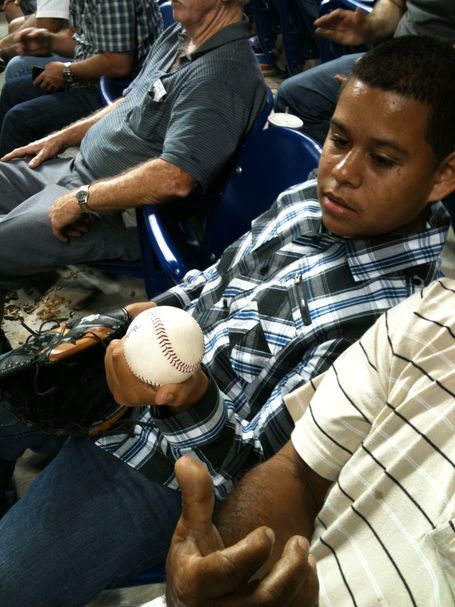 My friends gave me grief for not being able to acquire a foul ball that was located directly underneath me, and I left a bit disappointed in myself. It was my first encounter with a foul ball, and I was definitely unprepared for the encounter, so I presume that I will be more alert in future occasions.

During the fifth inning, the Marlins ran their version of the sausage race with their sea creatures running. The problem with the sea creatures is that they are hideous and look borderline psychotic. Rather than this being a fun event for kids to watch with their family, it honestly looks a little more like a traumatizing event. 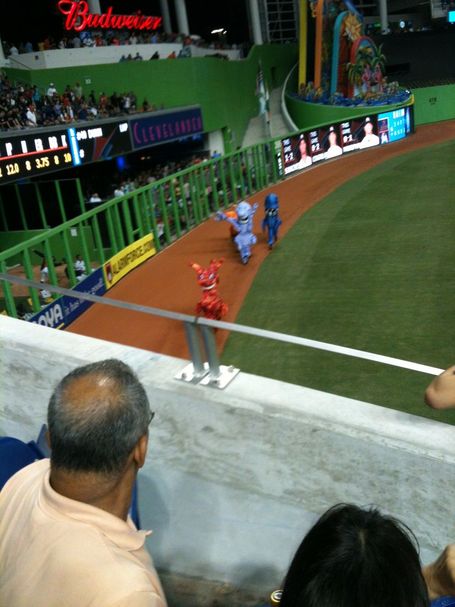 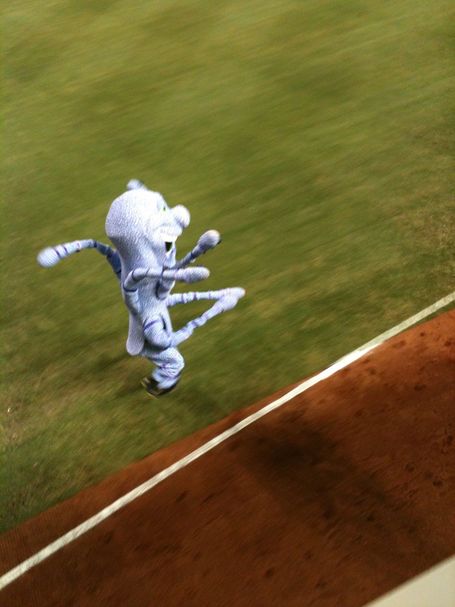 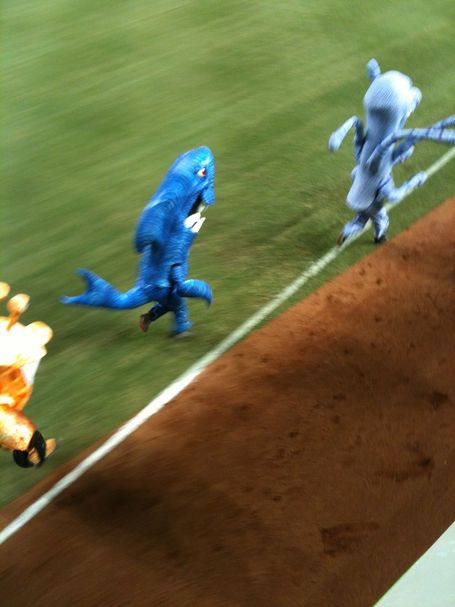 The sadistic-looking seahorse took the race that evening, not that anyone is counting. Nevertheless, it was still a horrifying and hilarious segment at the stadium, and yet another thing that makes Marlins Park tacky and unique.

When the Marlins began the ninth inning with closer Heath Bell coming in to pitch, the team was at a 97.2 percent chance of winning the game. After Astros catcher Chris Snyder flied out for the first out of the inning, the Marlins' chances went up to 98.8 percent. I even mentioned as much to my friends after Jose Altuve hit his double and took third base on an error by Emilio Bonifacio. I mentioned correctly that the odds for the Marlins might have gone back down to 96 percent, and indeed it did (96.5 percent according to FanGraphs).

Unfortunately, my words came back to haunt us, as Bell and the Marlins gave up a hit to Travis Buck to deliver the first run and allowed Jordan Schafer (who had previously reached on three walks) on base due to catcher interference. Jed Lowrie flew out to center and the Marlins had two strikes on hometowner J.D. Martinez, but Martinez delivered the last laugh by singling to center field, and this was quickly followed by another single to right field by Carlos Lee to tie the game and give the Astros the slightest edge (49.5 percent chance of Marlins victory). Then the error by Logan Morrison on Brian Bogusevic's fly ball occurred, knocking the Fish's odds down to just 14.3 percent.

We left the game immediately after the last strikeout by Giancarlo Stanton, if only to attempt to avoid traffic. We did not stick around for the fireworks after the game, as they just felt hollow following such a disappointing loss. Nevertheless, I still got a picture of the fireworks. 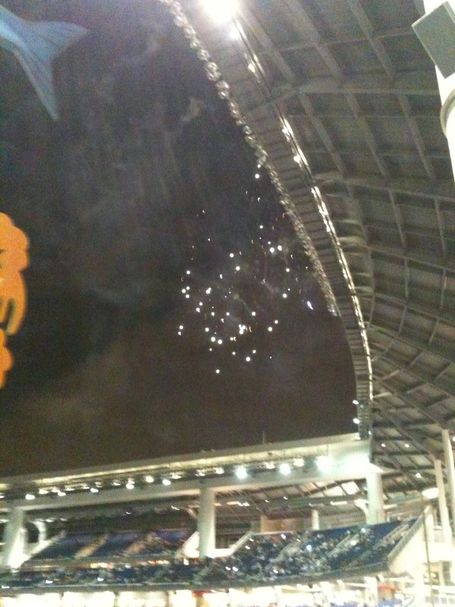 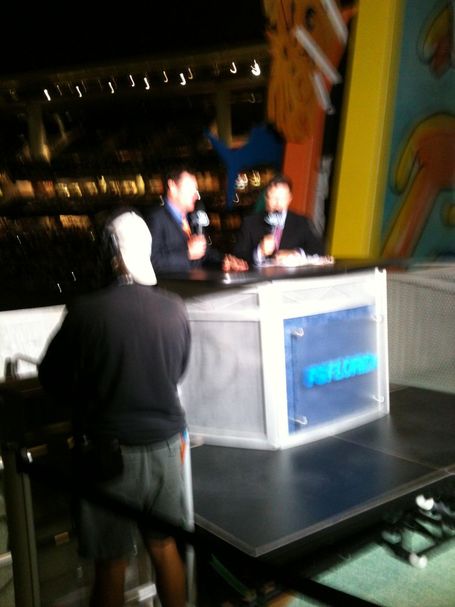 Afterwards, we made our exit quickly and took a few more pictures at the tail end of the visit, particularly of the large Orange Bowl letters that were scattered about at the foot of the stadium. 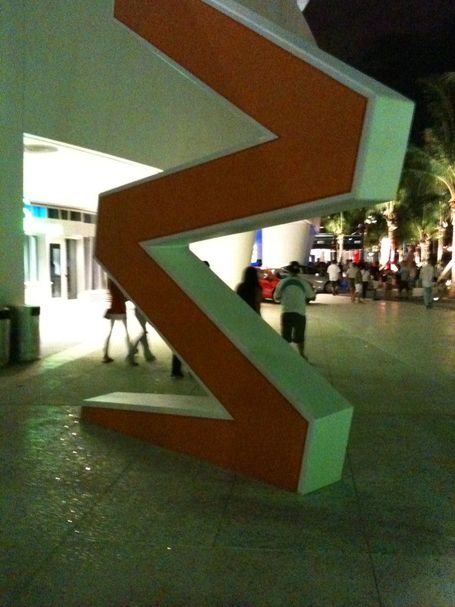 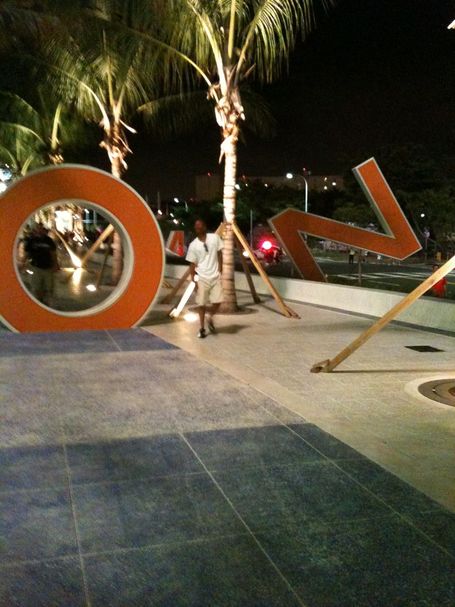 While I like the idea aesthetically (the letters do seem pretty cool), the idea of using the fallen letters to remember the Orange Bowl seems a little tasteless, even if it meant well.

Finally, I took one more picture that I thought was highly relevant given the evening's events. This blow-up Billy the Marlin seemed to be as disappointed as I was. 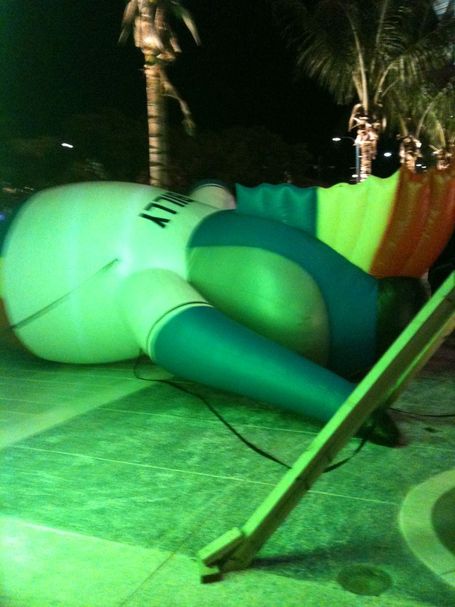 As sad as the loss was, I was extremely excited to be at the game regardless of the result. The stadium was beautiful on the inside and quirky in all of its little intricacies, and I think that that gave it some flair that more recent new stadiums have lacked. It was certainly a silly and fun experience to actually attend the game, though the result was highly disappointing. Aside from the ridiculous sea creature race, the features were not as bad as we all expected before the season, and I think in time, Marlins fans will grow to love their stadium. I certainly suggest making your way out there as often as you can, especially if you live in the area. Provided you purchase parking beforehand, getting in and out of the stadium is not much of a hassle and is well-controlled, and the garages are convenient enough to make the trip less of a hassle than it would be without purchasing parking. The food is definitely a feature you want to explore, and I suspect I will be trying out more new things when I head over there in the (hopefully near) future.