A Personal Visit to Marlins Park

Share All sharing options for: A Personal Visit to Marlins Park 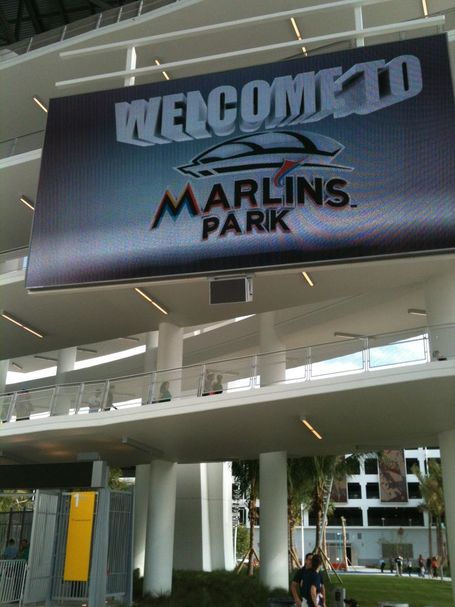 The Miami Marlins were at home on Saturday evening to face the Houston Astros. For the most part, this would have been an uneventful, every-other-game sort of evening, but for me, it was a very special night when it came to the Marlins. The reason, of course, was that it was my first visit to the Miami Marlins' new stadium, Marlins Park! Because I do not often get a chance to be in south Florida for the baseball season, I took this time to make sure I dropped by the ballpark and took plenty of pictures of the events that would unfold. What follows is a nice tour around bits and pieces of the park on this past Saturday evening, along with my opinions on everything that happened with regards to the stadium.

There were four of us going to the game on Saturday, but I drove myself and two of my friends to the park in my car so that we would not have worry about getting multiple parking spots. With all of the hoopla surrounding the difficulty with parking at the stadium, I decided I wanted no part of the attempt to find parking on the fly. Indeed, the stadium in Little Havana is almost directly next to residential neighborhoods, so finding a place to put your car did seem like a hassle if one did procure a spot beforehand. As a result, I went ahead and purchased a parking pass for $15 and was able to park at the center field stadium garage.

Once we were parked, we found our way around the outside of the stadium and checked out a few things before entering. Among the outside attractions were live music and a very large, inflatable Marlins logo. 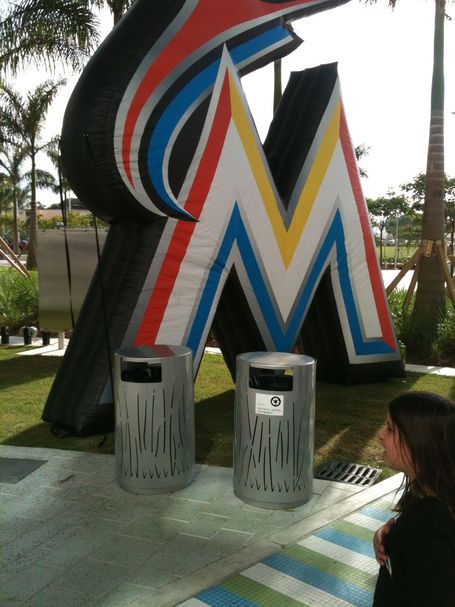 In addition to the large "M," one of the interesting aspects outside the stadium was the team store. In seasons past, the team store was lightly populated and loaded with Marlins gear. The gear is still here in this store, but it seems a lot more people are taking interest. 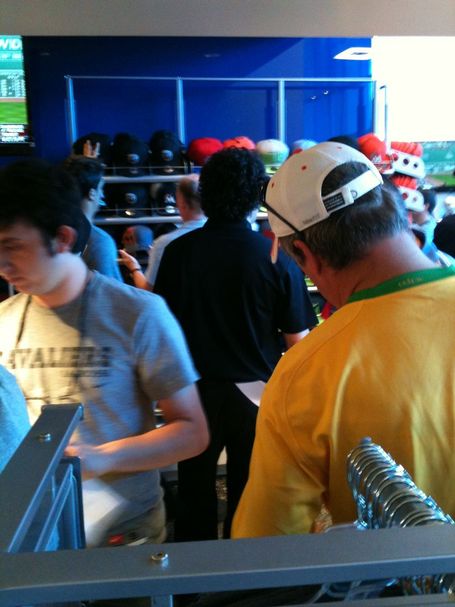 It is a very strange thing to see the store so busy given what we know about the Marlins of the past, but the store was packed and loaded with typically overpriced stadium goodies. Had I not picked up my own Hanley Ramirez T-shirt, I might have considered any of the items listed, all of which are priced the same as the ones available online.

One thing I did not like about the store? This roof television that was in the middle of it. 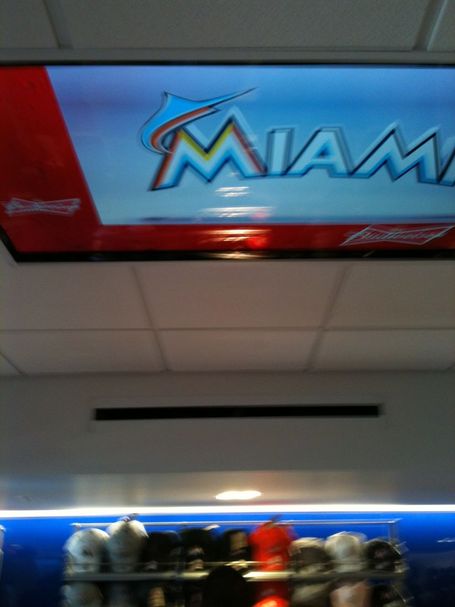 As you can clearly tell from this picture, the TV screen is on the ceiling, and the placement as such is completely confusing. Let's face it: how often will customers be able to watch the roof TV while in the crowded store? I am just uncertain as to the point of the placement, but that is neither here nor there. Service at the store was solid, and the selection was good.

We finally entered the stadium and made the rounds, walking through the various different areas of the promenade of the park on the way to our seats. We entered through the first base entry and the first thing we saw as soon as we got through to the stadium is the ominous light of the home run structure in the sunny distance. 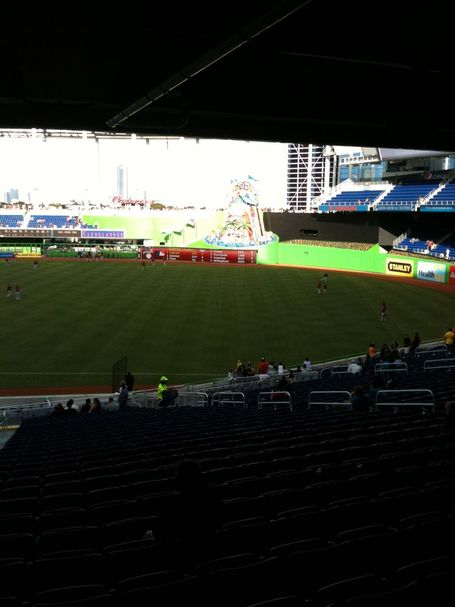 See, in this lighting it is hidden, bathed in sunlight, and as a result, less threatening. But as we made our way around, it would become clear that the thing would become more intimidating and more, well, enormous, as we approached our left field seats.

Along the way, we saw quite a few of the Marlins' fun, additional features they placed on the promenade. One such feature that was smaller than expected was the bobblehead museum, which featured a number of cool bobbleheads from each team. 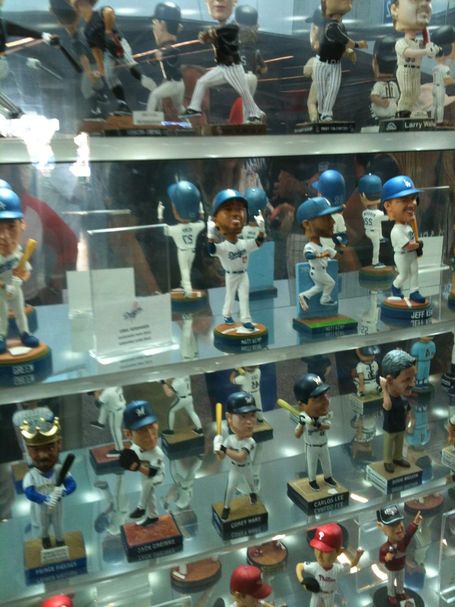 Above, you see a number of bobbleheads of days past (Jeff Kent on the far right) and present (Matt Kemp front and center). With each team featured, one would think it would be easy to find the Marlins, but I had an extremely difficult time spotting the home team amid the other clubs and the crowd surrounding the area, despite the alphabetical ordering. It turns out the Marlins were actually front and center, and their area too had parts of the past and present. 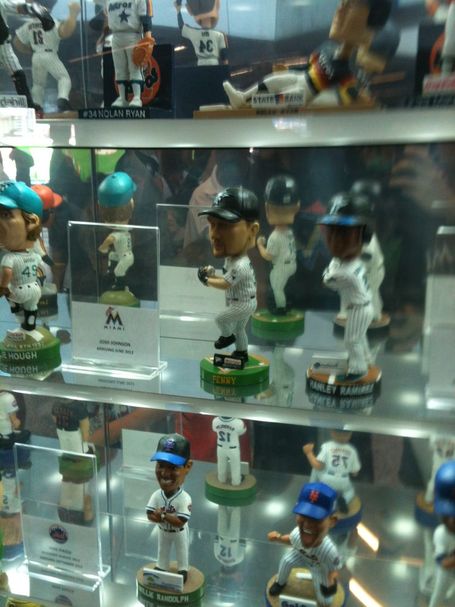 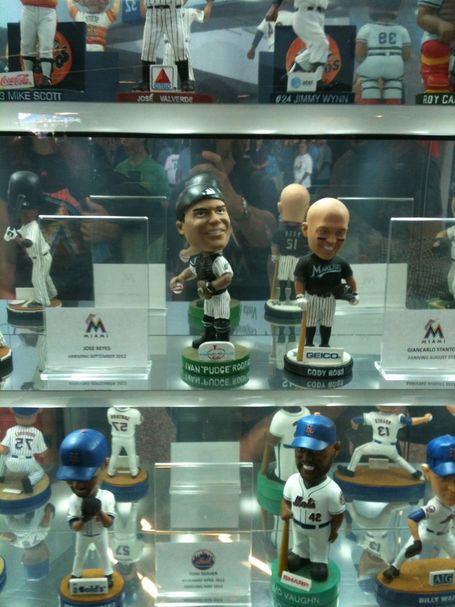 Above us are bobbleheads of two heroes of the 2003 Florida Marlins, Ivan Rodriguez and Brad Penny. But along with the past comes the present. and alongside Penny stood current Marlins star Hanley Ramirez. It is important that the Fish respected the past of not just the Marlins, but all teams. Along with some less than interesting inclusions (on the bottom of the second picture, you can see the presence of former New York Mets first baseman Mo Vaughn) comes a respect for the absolute best of the past, including a certain large-headed Babe. 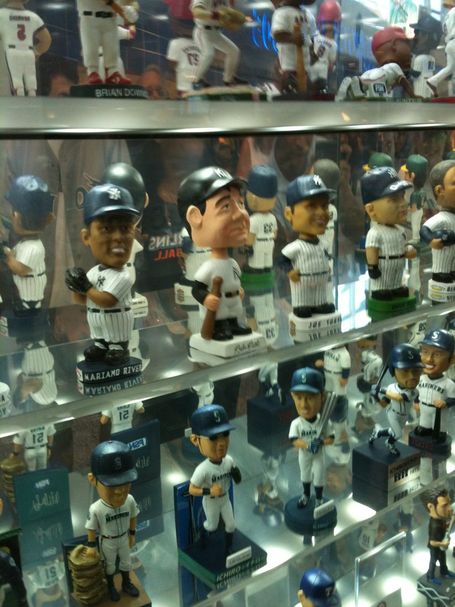 You cannot go wrong with including Babe Ruth. 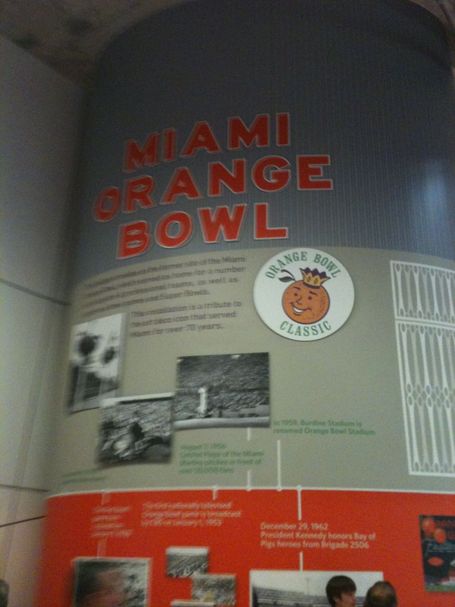 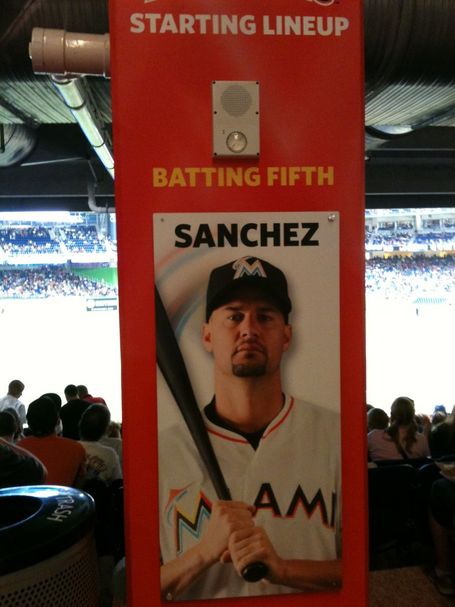 This is good for those of us who want to know about the lineup before making our Ichthyomancy picks live at the stadium. And as was mentioned on the live thread, you can indeed use WiFi internet access throughout much of the stadium, though my experience at the stadium showed that it was less available in the stands but very prominent and fast in the promenade. So if the Marlins are ever in need of running a double-header for whatever reason, make sure you bring your laptop and find a comfortable place to hang out to get your work done.

A Taste of Miami

I knew that one of the things I definitely wanted to try at the stadium was the food. The Marlins had made a fairly big deal out of bringing in local vendors from Little Havana to come in and bring Hispanic flavor to stadium food. So at around 6:30 pm, when I first began feeling the rumblings of hunger in my stomach, I knew exactly where I wanted to head. Luckily for my group and I, the Taste of Miami section of stands was right behind our very own section 27, so we went immediately to try it out. 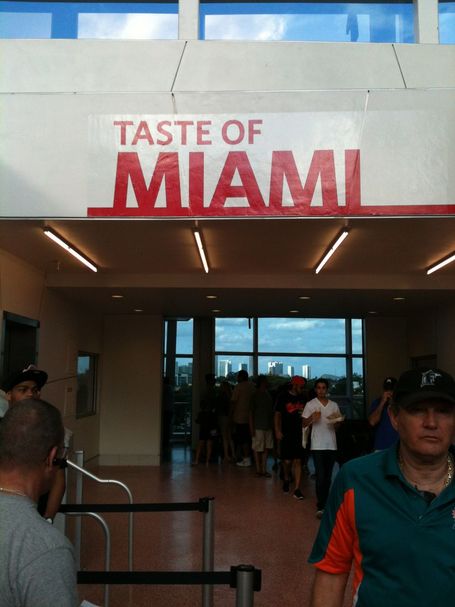 It was not too busy before the game, but not everyone had arrived yet, and it was busy enough to already fill the trash can next to the Taste of Miami section to capacity and beyond. My friends and I checked out the three establishments in the Taste of Miami. There was Papo Llega Y Pon: 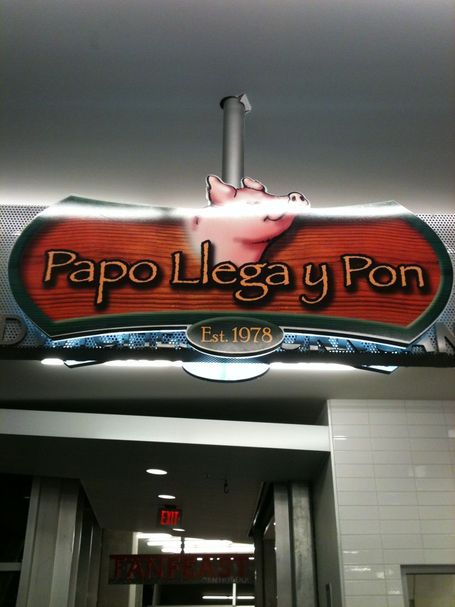 There is the Latin American Grill: 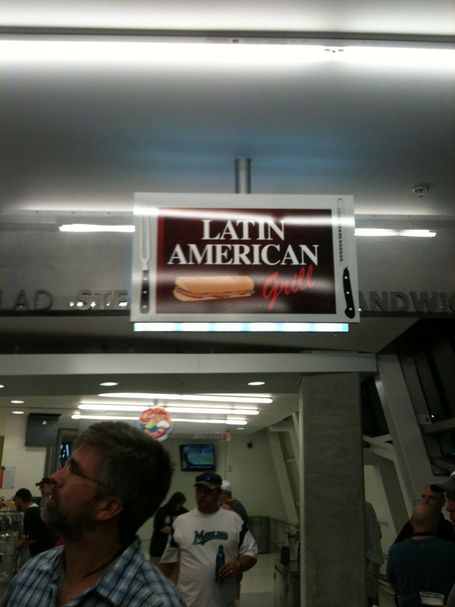 And finally, there is Don Camaron. 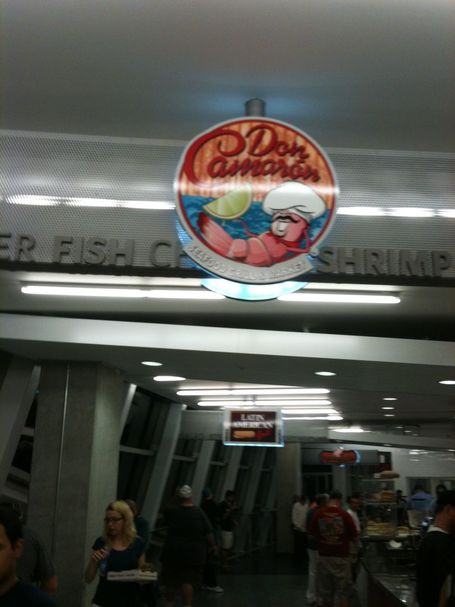 My friends and I did not order from Don Camaron, so I will have to reserve judgment of that location for a later date, but we did sample the main foods available at the Latin American Grill and Papo Llega Y Pon. I first tried the Latin American Grill's Cuban sandwich, as I thoroughly enjoy Cuban sandwiches. It was well done, well toasted, and the ingredients were good. I have had better Cuban sandwiches in the past, but this one was very good. The main problem was that, at $12, it may not have been worth the money, though it is acceptable for stadium food. There is a bonus in that the sandwich came with plantain chips, which were decent. 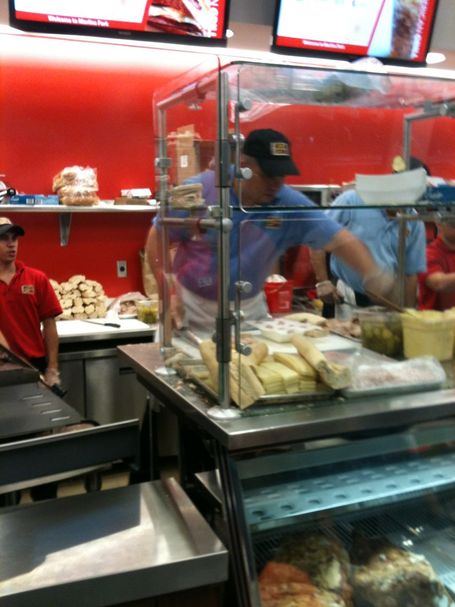 A few friends and I also tried the pan con lechon, or pulled pork sandwich from Papo Llega Y Pon. This was the best meal of the night. 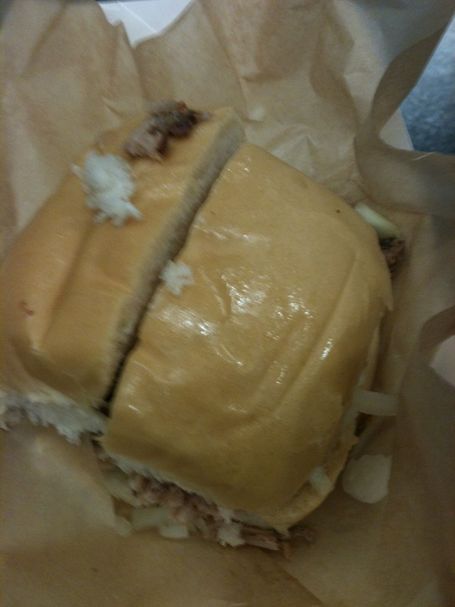 The sandwich came with mojo sauce, salt, and onions, though I did not try the mojo sauce. Nevertheless, it was delicious. The pork was well cooked and included both crispy skin parts and very soft meat, forming a pretty sweet blend. The bread is a little greasy for my taste, as can be told from the picture, but it was a minor aspect to consider. The best part about the sandwich, however, was the fact that it was only $7 at the stadium, which is a great deal considering how much food typically costs at parks.

We did sample some of the other foods in the area, including the personal pizza costing $10 (not a fan), the mini-cookies costing $5 (not a good deal, but not a bad one), and the soda. The soda was priced at $4.50 for a one-shot and $8.00 for an unlimited refill cup. These are prices one typically expects at the stadium. And the service throughout was excellent. 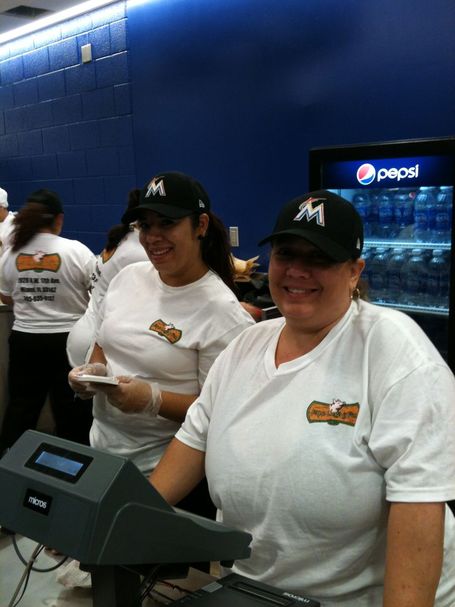 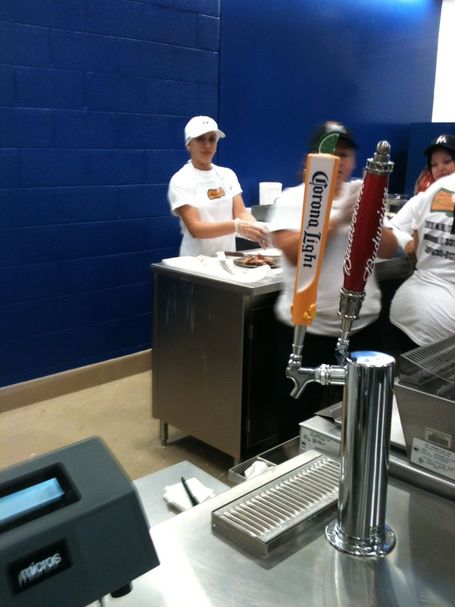 The last bit before the game began involved watching the various aspects of the new stadium from our seats. The first thing that immediately caught the eye was clearly the home run structure. 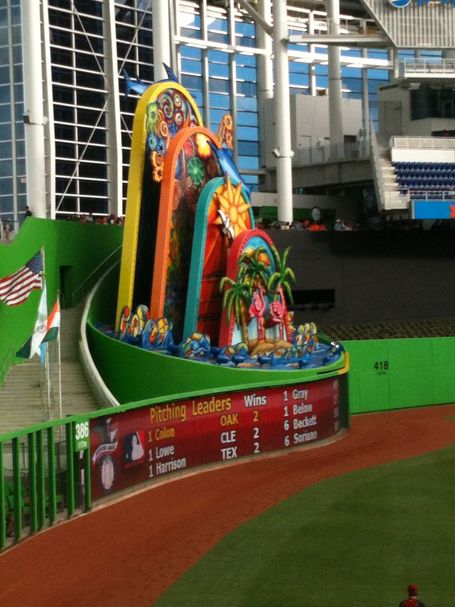 It is quite the sizable thing, and you really need to see it live to truly appreciate its size. Of course, there were a few other things to watch this evening. I took a look at various different aspects of the stadium. 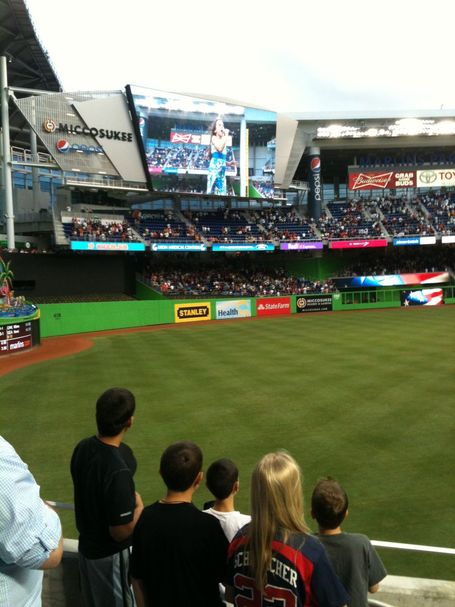 And I also wanted to take a look at the bullpen and the Clevelander next to it, which at the time was not quite busy with activity. 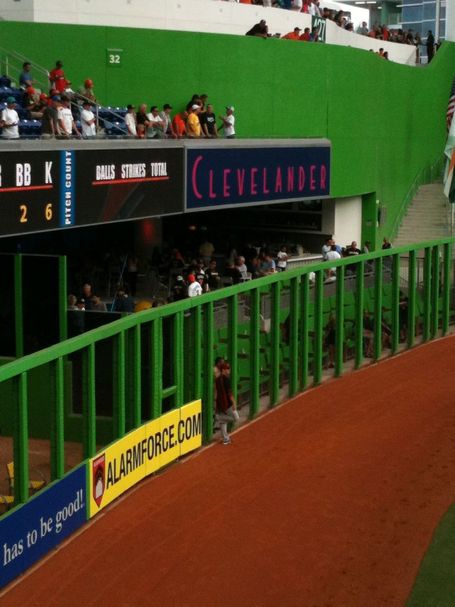 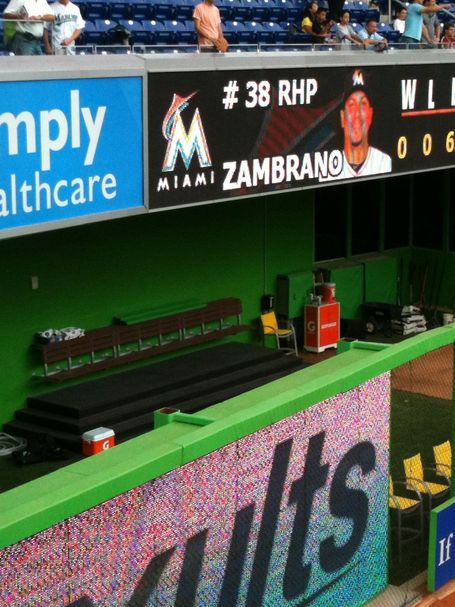 The Marlins and Astros began shortly after we ran around and took these pictures, and later on today, you will get a glimpse of some what I saw from my vantage point during the game.