Every year, there will be at least one game that you will desperately try to erase from your memory. This was that game. The Miami Marlins lost in the ugliest fashion I can possibly imagine: a dropped fly ball by Logan Morrison with two outs and the go-ahead runner at third. This came on the heels of an awful blown save by Heath Bell. Awful is a good word to describe the experience of watching this game unravel. Awful, awful, awful.

My feeling throughout the whole game was that the Marlins hardly deserved to win. The Astros scored early, essentially handed a run by Carlos Zambrano's three walks in the first inning. But Zambrano's command was still very shaky until the fifth inning. He walked a batter in the second, third, and fourth innings. Take a look at his night. 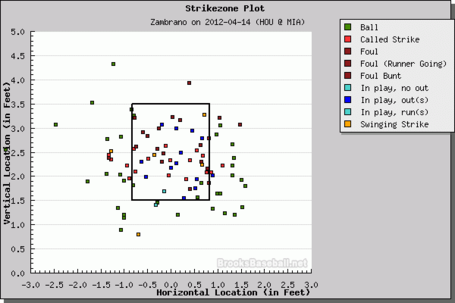 The Astros failed to capitalize on Zambrano's poor command past the first inning, with their best opportunity coming in the top of the third inning. Jed Lowrie led off the inning by foolishly swinging at the first pitch he saw, flying out to Emilio Bonifacio. J.D. Martinez took a far wiser approach and fouled off all of Zambrano's pitches until he finally drew a walk. Carlos Lee proceeded to hit a line drive double, advancing Martinez to third. Brian Bogusevic then hit into a fielder's choice and Martinez was thrown out at home. It looked like Astros would take the lead again when Chris Johnson singled on a line drive to left field, but it turns out Carlos Lee can't run. When I say he can't run, I mean he is slower than molasses rounding third on infield dirt. Crisis averted.

Zambrano eventually scraped by with just one earned through six innings pitched. He even earned the coveted Fish Stripes "Player of the Game" award. However, I feel compelled to ask what kind of hero gives up six walks. I suppose Zambrano is the Marlins' antihero. We'll just have to enjoy Carlos, warts and all.

The Marlins appear to be big believers in the value of active base-running and that philosophy paid dividends last night. Emilio Bonifacio singled off of Bud Norris in the bottom of the first and stole second with two outs. Logan Morrison then hit a ground ball through the infield, scoring Bonifacio and tying the game. The Marlins scored again in the third inning when Jose Reyes led off with a triple and then scored off a Hanley Ramirez line drive to center. After reaching on a bunt play, Bonifacio once again used his speed to the Marlins' advantage, advancing to third on a hit and run. In the next at bat, Morrison scored Bonifacio on a sacrifice fly. I am not usually a fan of aggressive baserunning, but this tactic worked in the Marlins' favor last night.

As the pitchers settled down, the game appeared all but over by the ninth inning. Zambrano had regained command and shut down the Astros in the fifth and six innings. Steve Cishek did an admirable job in the seventh, striking out and two batters and inducing a ground ball to Donnie Murphy. The Marlins' bats were largely silent after the third inning. But baseball is a game determined by the team with the most runs scored after nine innings and the Marlins had only survived eight innings. Not to worry, the Marlins have a proven closer.

Heath Bell retired the first batter without too much difficulty, but the game quickly went downhill from there. Jose Altuve doubled to center field, but advanced to third when Bonifacio misplayed the ball. Travis Buck then singled, scoring Altuve. The inning turned strange when Jordan Schafer reached first on catcher interference. Hope returned when Lowrie flew out, but this hope was short lived. Bell soon allowed two singles, tying the game up. The save was blown and Bell was removed from the game. With no walks or strikeouts, I can't help but imagine that inning might have turned out radically different if one or two of those hits had fallen into a glove. Or what if the catcher interference play had never happened? It might have been a great day for the Marlins.

What happened next, I can't explain. Morrison dropped what appeared to be a very routine fly ball. I heard rumblings that there was a lot of wind in the outfield, but after re-watching the play at least five times, I think the error is indefensible. But baseball players make mistakes. If Morrison hadn't hit a single and a sacrifice fly at key points earlier in the game, the Marlins have may headed into the bottom of the ninth trailing the Astros, regardless of the dropped ball.

153 games of baseball remain. Let's hope they are more successful than this awful one.