After all of the mess that the Miami Marlins have gone through over the last two days with the Ozzie Guillen fiasco, it would have been nice to come back to actual baseball with a victory. Sadly, last night was just not the night for the Marlins, as they were stifled by a less-than-stellar performance by Roy Halladay and shocked by a career-worst night for Josh Johnson. Johnson, in particular, was a difficult player to watch in yesterday's game, as he unraveled so poorly that the Marlins had no shot of winning by the third inning.

Johnson Has an Awful Night

Against St. Louis, it felt like Johnson was not at his best, but he admitted afterwards that he was a little amped up for the Opening Night game. Yesterday, he had a high-profile assignment against one of the best pitchers in baseball in Halladay, but it was again clear he just was not ready. 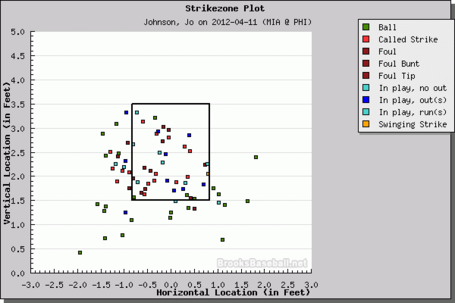 This chart underestimates the poor location that Johnson displayed tonight. During his awful third inning, he simply could not locate a pitch in an appropriate location. Almost all of his pitches that were really low in the zone were thrown in that inning, and while they did not result in walks, they consistently put him in hitter's counts against an otherwise inferior Philadelphia lineup. In his disastrous third inning, Johnson got behind four of seven hitters who saw more than one pitch, and one of those hitters who did start with an 0-1 count was the pitcher Halladay on his second trip to the plate. Johnson could not find the zone in the third, throwing 14 balls (with three officially "in the dirt") versus just five called strikes. Overall, he threw 25 balls over just 11 called strikes, a 2.3 ratio that was worse than his last start and very uncharacteristic given his traditional control. The control and placement of his pitches just was not there tonight, as evidenced by the numerous belt-high pitches shown in the zone above that went for hits.

But location was not the only damning issue with Johnson's game last night. His stuff really was not there either. Two parameters that we generally lump together as part of "stuff" are velocity and swinging strikes. In terms of velocity, Johnson never really found his usual groove around 94 miles per hour (mph). For the evening, he threw 40 fastballs and averaged a meager 92.5 mph on them. That velocity is a solid one or 1.5 mph lower than the lowest velocity he has posted since 2009 with the exception of his last game from 2011; this means that, outside of that last Johnson outing, he has not come close to averaging 92 mph on his fastball. For whatever reason, he did not have his classic velocity tonight. In his last start, his fastball was down a bit as well, down to 93 or so mph, but last night was a new, unexpected low.

However, this may not have been the most surprising aspect of last night's performance. Johnson has a career swinging strike rate (here determined as swinging strikes per pitch) of 9.6 percent. Against the Phillies, Johnson induced just one swinging strike against them in 83 pitches. Part of this was his inability to get ahead in counts and force hitters to chase his superior breaking balls; Johnson threw just six sliders and six curveballs due to a combination of a decent number of lefty hitters and his inability to get ahead on hitters. No matter who you are, it is extremely difficult to induce a lot of swings and misses on fastballs, and that is especially true when your fastball is clocking in at 92 mph when it usually is supposed to go at 94 mph. Without viable breaking pitches and a relatively feeble fastball, Johnson was working with inferior tools last night.

Johnson may have been the goat that evening, but the Marlins did not help on the defensive end either. The umpires did give what appeared to be a break to the Phillies in that third inning when Juan Pierre was called safe on a steal that, on replay, should have been called an out. Of course, what followed was a huge Phillies rally that ended with them tallying five runs in that inning and helping to eventually chase Johnson from the game. As commenter flmarlins7 pointed out, that call was the difference between a runner on second base and one out and no runners on and two outs. Using the run expectancy matrix listed here for the most recent era, the difference between those two base-out states is about 0.6 runs, meaning that the ref cost us almost two-thirds of a run with that blown call.

It did not help that the Marlins' defense faltered multiple times that inning. Placido Polanco followed the steal with a single to left field, and Logan Morrison missed the cutoff man on a throw to home plate, allowing Polanco to advance to second, costing the Fish a quarter of a run. Jimmy Rollins followed singled into left-center field and Morrison was there to cut it off. Unfortunately, he slipped in the outfield grass and allowed Polanco to advance to second base on an error. That error cost the Marlins another quarter of a run. Morrison followed that play with another mistake in airmailing another throw home and allowing Hunter Pence's RBI single to move him to second base. In that exchange, Morrison cost the Marlins three-quarters of a run with mistakes tacked onto the additional three runs that did actually score. This was followed by Giancarlo Stanton missing a diving, but makeable catch in right-center field which led to a series of events that eventually brought two more runners home via a Freddy Galvis double.

Some might want to blame the umpire for the (close) blown call at second base, but that only cost the Fish 0.6 runs. The team shot itself in the foot for an additional full run on mistakes in the outfield, so it has very few people to blame but themselves for letting the game get out of hand.