Does Jeffrey Loria Have a Moral Obligation to the Miami Marlins Fan Base?

A recently published poll showed results that declared Miami Marlins owner Jeffrey Loria as universally despised in Miami. But are his actions wrong on a moral standpoint to the Marlins fan base?

Share All sharing options for: Does Jeffrey Loria Have a Moral Obligation to the Miami Marlins Fan Base?

A recent Miami Herald poll asked Miami Marlins fans about their stand on owner Jeffrey Loria, and the results were unsurprising. Loria appears universally despised by the fan base after he and the front office perpetrated the biggest fire sale trade in team history by sending Jose Reyes, Josh Johnson, and Mark Buehrle among others to the Toronto Blue Jays.

A survey of 400 South Florida Major League Baseball fans, 90 percent of them self-described Marlins fans, found that the Marlins organization — Loria, in particular — antagonized and may have permanently alienated a majority of the fan base.

Only 23 of the respondents (6 percent) had a "favorable’’ opinion of Loria, and a third of those were people who said they personally know him. The only public figure who might lose a popularity contest to Loria in South Florida right now is Fidel Castro (who has a favorability rating of rating of about 1 percent, says pollster Fernand Amandi).

A majority of the season-ticket holders surveyed said they would favor a boycott if it led to Loria selling the team.

The Miami Marlins fan base has rightfully been devastated by that trade, and the fans have good reason to blame Loria for a good majority of the team's problems. It seems almost certain that he orchestrated the move that sent three of the Marlins' best remaining players off to other locations for a slew of prospects and salary relief, and you have to believe that, despite the benefits of the move for future contention, you have to feel that Loria is more likely to be making this trade for salary reasons rather than competitive reasons.

But one concept that was asked in the poll that I found interesting was the one regarding Loria's moral responsibility to the fan base. 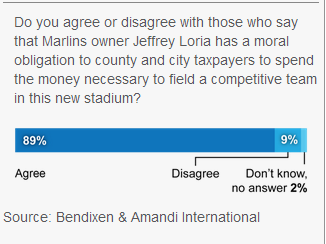 This is an interesting question in that it brings up a concept that we as fans romanticize but one that does not necessarily mesh with the business side of sports. Fans idolize their teams and revere them like few other things in life, and that is no different with fans of the Miami Marlins. Even with a significantly lighter fan base than other baseball teams, the folks who are true fans enjoy their team on a level that goes beyond many relationships in their lives. For fans, their favorite team is not just another group of players in a jersey, but almost a member of the family.

But does this irrational attachment to a team leave the team's owner, in this case Loria, with a moral obligation to succeed, even at the cost of business interests?

The Definition of the Fan

The word "fan" is derived from the word "fanatic," and obviously that term is loaded with extreme meanings. As defined by Merriam-Webster:

The words "excessive" and "intense uncritical" show the strength of the affiliation of true fans to their favorite sports team. Fanatics harbor almost irrational support for their team, and their connection to their team is as strong as that of their friendships and family in real life. Healthy or not, fans see sports in this fashion, which is peculiar for a spectator event.

It is, therefore, a natural response by a fan base that is shunned and scorned by their team's ownership to respond with a question beyond that of concern for their favorite team but also leaning towards morality. After all, if an action was taken to harm a friend or family member, you too would question the morality of the action and deem it inappropriate, and you too would have a visceral response to the perpetrator of that action. True fans of the Miami Marlins, those that were supposedly polled in this survey, were displaying that when questioning the morality of Jeffrey Loria's activities. This trade "pulled the plug" on the 2013 and likely 2014 seasons, and no Marlins fan wants to suffer through that much losing as a result.

The fans of Miami have an additional argument to be made in this case, as they also feel not just an emotional connection, but one that is fortified with financial investment. Taxpayers in Miami are paying for a hefty amount of the Marlins' new ballpark, with the team only taking on $150 million or so of the $515 million undertaking. By the time the loans on the cities' part of the deal are fully paid off, the city and county are expected to pay a combined $2.4 billion thanks to interest accumulation.

With that kind of financial motivation, it is easy to understand how Marlins fans who live in Miami-Dade county would have added frustration with the Marlins. It is similar to giving a loved one money for an education and watching him or her squander the funds and leave the education aside. The sting comes both in the actions of the party and the financial complications of the move.

However, does all of this enter the realm of ethics and morality? I suppose this depends on your definition of "morality." In terms of abiding by contracts or laws, Loria did nothing wrong, even when you consider the financial ramifications upon which the city took. Yes, the city of Miami and Miami-Dade county paid for a large majority of Marlins Park, but that is just one aspect of a much larger asset known as the Miami Marlins, which Jeffrey Loria owns. Theoretically, as owner, he need not answer to anyone's demands, even a fan base's. He is not beholden to anyone as majority owner of the team.

But that looks at Loria's situation from a pseudo-legal standpoint. It does not address the morality (or lack thereof) of his actions as they relate to the Marlins' fan base. How can we judge if his actions are moral, immoral, or even amoral? I looked at one aspect of Immanuel Kant's categorical imperative that sounded like it may have something to do with this question. According to Kant's second formulation of the categorical imperative:

Act in such a way that you treat humanity, whether in your own person or in the person of any other, never merely as a means to an end, but always at the same time as an end.

Of course, there are ramifications with regards to what this means to Loria as it pertains to Marlins players and other employees, but let us consider how it relates to Loria and Marlins fans. The question asks whether Loria has a moral obligation to spend money to field a competitive team? Well, is Loria using Marlins fans as a means to an end and ignoring their own rights as ends? Not necessarily. Loria is doing what he thinks is best for his team, not necessarily for Marlins fans. His team, the Marlins, is not itself an entity. It is merely a means to his end, which is in this case is profit.

But Marlins fans probably do not see the Marlins as an amorphous, rights-less entity. As mentioned above, Marlins fans see the team as an entity as close to them as friends and family. If that were to be the case, you could see how not fielding a competitive ball club would cause the suffering of the ball club and, by extension, the suffering of the Marlins' fan base. It denies the Miami Marlins entity its right to be its own end and to be the best team it can be every season, and Marlins fans can argue that, if anything, Loria owes the debt of morality to the team itself.

Of course, the team is not a living entity of humanity, but indeed just another asset in Loria's ledger. And that is where the conflict may lie; for Loria, the team is just a method with which to make money, but for fans, the Marlins mean a lot more than that. To Marlins fans, the Marlins may as well be alive but slowly dying an immoral death at the hands of a swindling owner who is looking to make a buck instead of pleasing third-party observers.

From this side, it is very easy to yell at Jeffrey Loria, but I presume from the other side, it would be very easy to accept Loria's actions with his intended goal in mind.