The Miami Marlins suffered a number of injuries in their outfield, particularly with Opening Day starting center fielder Emilio Bonifacio and left fielder Logan Morrison. As you will see later today, the Marlins struggled to recover from these injuries and received very little production in return by their replacements in the outfield despite the team's relative depth at the position.

The lone exception in a cavalcade of terrible outfield replacements in 2012 was Justin Ruggiano, who came out of nowhere to put up a spectacular season in relief of Bonifacio and Morrison and likely earned himself at least a look at a starting job in 2013.

One look at Ruggiano's line makes it clear that his offense was his trademark this year.

The initial reaction to Ruggiano's excellent performance was that the Marlins stumbled onto a hidden fountain of production. Prior to this season, Ruggiano had hit just .226/.262/.359 in three different brief major league stints with the Tampa Bay Rays. The Rays never saw anything in Ruggiano, who looked like a prototypical Quad-A player who raked in Triple-A (career .291/.362/.480 hitter in 2202 PA in Triple-A) but struggled with contact and a lack of power at the big league level.

But in 2012, Ruggiano showed he had some decent pop. His .220 ISO was decent for a corner outfielder, and his 13 home runs were pretty impressive for a player with just 320 PA. Ruggiano also lined doubles and triples on 31.2 percent of his base hits that stayed in the ballpark and 12.4 percent of his balls in play that stayed in the yard. As we mentioned in a previous article. these sort of numbers would be among the highest in baseball if they stuck around. That is, it is not unfeasible to see Ruggiano be able to maintain that kind of extra-base power, but it is not particularly a common skill.

Nevertheless, in 2012, Ruggiano accomplished just that, though admittedly his ISO began falling after a very hot July. It was hard to deny his power in such a small sample, but keep in mind that that strength seemingly was sapped as the season wore on. Through July, Ruggiano had hit eight home runs and had a .297 ISO through late July before putting up just five homers in about the same number of PA with just a .154 ISO.

Ruggiano's dropping power was mitigated somewhat by his magical ability to maintain an extremely high BABIP. Ruggiano's ridiculous start (he hit .355/.419/.652 through July) was backed by a .427 BABIP that I claimed was unsustainable at the time. It turned out that I was correct in that Ruggiano could not sustain such a high BABIP, but it turned out that he still hit .375 on balls in play the rest of the way to force a .273/.331/.427 slash line from August until the end of his season.

It was a good thing he was able to keep that batting average up, because his strikeout rates, like Giancarlo Stanton's, were on the rise all season. 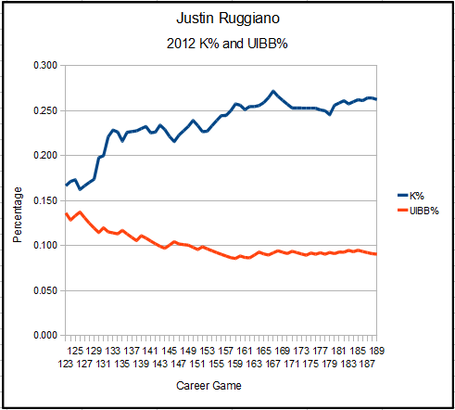 The start of this chart is on Ruggiano's first game in July, when his strikeout rate was at 16.7 percent and his walk rate was up to 13.6 percent. From there, the decline in rates is fairly sharp, with Ruggiano stabilizing at around a nine percent walk rate and more than a 25 percent strikeout rate by the time mid-August rolls around. A combination of decreasing fastballs and decreasing contact led to Ruggiano's second-half struggles. From August through September, Ruggiano struck out 30.1 percent of the time while walking in just 8.0 percent of his PA.

Ruggiano was stellar for at least 150 PA in 2012 before beginning his steep regression to the mean, but he remained at least a decent play in the outfield thanks to some passable defense in center field and in the corners. The defensive statistics mostly had Ruggiano as a league average defender wherever he went this season, though TotalZone thought he was a spectacular center fielder. From the eye test, Ruggiano seemed to have decent instincts, though he took his fair share of odd routes to balls in center field. He did seem more comfortable in the corner outfield spots, and his arm is decent enough to play at each position. An average assessment for his defense seems plausible.

The Marlins did not have a whole lot go well in the outfield for them beyond Giancarlo Stanton, but Justin Ruggiano was a pleasant surprise in 2012. His bat seems unsustainable, but he has done well enough in terms of power to shed the Quad-A label for at least 2013, and his defense is good enough that projecting at worst a fourth outfielder or platoon candidate is not out of the question. The Marlins were lucky to find even that much in the scrap heap.