Miami Marlins' Mark Buehrle and His 200 Innings Streak In Context

Miami Marlins starting pitcher Mark Buehrle reached 200 innings for the 12th consecutive season. How impressive is that feat in the context of his time period?

Share All sharing options for: Miami Marlins' Mark Buehrle and His 200 Innings Streak In Context

In case you had not heard, Miami Marlins starting pitcher Mark Buehrle's season is over, as the Marlins have shut him down before his final scheduled start tomorrow afternoon. This is strictly a precautionary measure, but you have to feel that had Buehrle not reached 200 innings in his last start against the Philadelphia Phillies, he would be pitching tomorrow to assure it. As it stands, Buehrle has already reached his 12th straight season with 200 innings or more, and he will finish the year with 202 1/3 innings in 2012.

The streak signifies exactly the sort of qualities fellow players, managers, and fans enjoy about Mark Buehrle. Buehrle was always praised for his consistency and dependable nature, and it is no surprise that, in a season of turmoil and change such as 2012, manager Ozzie Guillen wanted to turn to Buehrle to help anchor the rotation. He did not disappoint in putting up yet another 200 inning season as other players on the Marlins were dropping like flies due to injury or trades.

But just how valuable has this streak been over these last 12 seasons? How difficult must this task have been, and how much did Buehrle contribute in the end with all of these 200-inning seasons? Let us put the streak in context.

Yet Buehrle rarely hit the high marks of the club of 200-inning pitchers. He led the league in innings twice, in 2004 and 2005 during his prime hoss years, but since then he has seen his innings steadily decline. 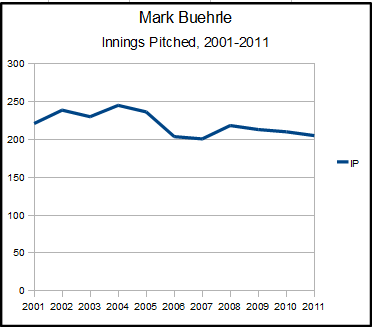 After that 2005 season, Buehrle had the worst season of his career in 2006 and ever since then, he has failed to break past 218 innings in a year.

But there is also a slight catch. Buehrle is also making fewer starts than he did in his early years with the Chicago White Sox.

Sure, Buehrle is not quite the workhorse of yesteryear, and given the fall in starts made and innings pitched, it is very likely that something happened health-wise in 2006 that dropped him to a lower talent level. But Buehrle is still more or less ticking at an good frame in terms of innings per start, even if it is not at the elite level of his early career; among the 29 players with at least 200 innings in 2012 heading into the final two games of the year, Buehrle ranks a middle-of-the-pack 16th in innings per start.

As for the other pitchers who have thrown 200 inning seasons since 2001, Buehrle obviously has them all beat by number, but by how much? By my count, eight pitchers put up six seasons of 200 or more innings from 2001 to 2011, not necessarily in consecutive order. Only three pitchers (Dan Haren, Tim Hudson, and Roy Oswalt) had seven seasons with at least 200 innings. Only three other pitchers (Roy Halladay, Javier Vazquez, and Livan Hernandez) had eight seasons with 200 or more innings. In total, only 14 pitchers put up even six seasons of Buehrle's nature on the map, and they were not even necessarily consecutive. Livan Hernandez's seven-year streak from 2001 to 2007 is the closest streak that I could find to Buehrle's current 12-year run. Roy Halladay had the next longest active streak at six seasons, but his streak ends this season thanks to injury.

As a result of Buehrle's impressive streak of 200 innings pitched, he also ended up being the leader in the overall innings category. His 2425 1/3 innings was tops in the majors from 2001 to 2011, ahead of CC Sabathia's 2364 1/3 and Livan Hernandez's 2348 1/3 innings. Those three along with Roy Halladay (2300 innings) were the only players to reach the 2300 inning plateau, which would have come out to an average of 209 innings per season. Javier Vazquez fell just short of that mark with 2295 1/3 innings, and no other pitcher put up more than 2200 innings.

But again, despite Buehrle's impressive totals in terms of innings pitched over the course of that time period, Buehrle's name was never tied to the superlative performance of those 11 years. Despite the fact that he was the decade's most active pitcher in terms of innings pitched, none of his individual seasons are among the top ten most innings in one year, and only one is within the top 20 seasons. Much like Sabathia, who had only five 200-inning campaigns, Buehrle accomplished his longevity by consistently hitting a decent benchmark rather than being spectacular in any one given season.

That extends into the Buehrle's performance in terms of a value standpoint. Buehlre's best ERA- from 2001 to 2011 was 70, or 30 percent better than the league average. That mark ranks 61st among player seasons from that era. Buehrle's most valuable season by Baseball-Reference Wins Above Replacement (rWAR) was his 2007 year at 5.9 rWAR, which ranks 71st among 200-inning seasons. By FanGraphs Wins Above Replacement (fWAR), his best year was his 2005 year valued at 6.3 fWAR, and that ranks 52nd among player seasons.

A placement within the 50th to 70th ranked years among 460 seasons means that Buehrle's absolute best in his amazing 12-year stretch of 200 innings was only good for being in the top tenth percentile. Buehrle's absolute best was better than 90 percent of pitchers throwing 200 or more innings, but it does not qualify as the elite of elite pitchers.

However, when added together, Buehrle does indeed stand out as one of the elite pitchers in baseball during the era, and that is in part due to his longevity and those 200 inning seasons. Among pitchers from 2001 to 2011, Buehrle ranks fifth in rWAR with 45.1 wins; in terms of fWAR, he ranks seventh with 45.5 wins. While Halladay was the clear king of the era, no other pitcher separated himself from the pack and as a result, Buehrle is stuck alongside Oswalt, Sabathia, Santana, and Vazquez as the next best pitcher of this group.

You can also see this comparison when you look at pitchers born in the 1970's. Among pitchers from this decade, Buehrle is fifth all-time in rWAR, behind Pedro Martinez (who started early enough to be considered a part of the previous decade of pitchers), Halladay, Andy Pettitte, and Tim Hudson. The latter two are comparable players for Buehrle and pitchers whom he could easily catch, as Buehrle likely has another three or so decent seasons remaining in his career.

Buehrle's impressive resume since 2001 has all been backed by his stellar 200-innings streak that he will look to continue next year as a Marlin. While Buehrle has never been considered the best pitcher in any given season, his collective body of work during the streak and as a whole is well-deserving of recognition among the best pitchers of his era.