Not much was fun about yesterday's 4-1 loss by the Miami Marlins to the Philadelphia Phillies. But we here at Fish Stripes are nothing if not optimists, forever chasing those #minorvictories. So there was definitely something positive to come out of yesterday's loss, and that was another strong performance by Nathan Eovaldi. Eovaldi went six innings and struck out seven batters with only one walk, and that performance brought his numbers with the Marlins down to a 4.43 ERA along with a 4.17 FIP. In Eovaldi's last three contests, however, he has looked at his best, posting a 2.25 ERA with 20 strikeouts and five walks in 20 innings.

Before even this game, however, manager Ozzie Guillen has been giving the young righty some hefty praise.

"I remember one very, very good guy," Guillen said. "When Verlander was a baby, he was like this kid too. He was all over the place. He was a thrower. Then Justin began to throw strikes. He fixed his pitches. And look where he is right now."

"I'm not saying I compare [Eovaldi] with him," Guillen said. "But the same kind of arm. I hope he ends up like him. I will compare him to Verlander early in his career. Hopefully he can reach that potential."

Even mentioning Justin Verlander's name alongside Eovaldi has to make Marlins fans excited. But of course, Guillen is making a comparison based on some similarities, but this is not exactly apples-to-apples. How much of Eovaldi's game really matches up with Verlander's early career, and does he have the potential to become even half of what Verlander now is?

The first most obvious thing about Verlander that Eovaldi shares is the high-velocity fastball. According to Baseball Info Solutions, Verlander's fastball was at 95.1 mph in his rookie in 2006. Back then, that was second in baseball only to Felix Hernandez among qualified starting pitchers.

Since having the second fastest fastball in the majors, that number has fluctuated a little but has generally stayed within the 94-95 mph mark. 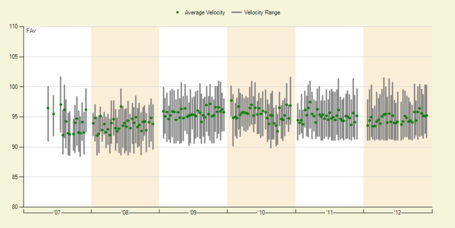 In fact, among qualified starting pitchers since 2007, Verlander's average fastball velocity is third in the majors behind only Felipe Paulino and Ubaldo Jimenez at 94.9 mph. As a comparison, Josh Johnson has averaged 94.0 mph in that same time span.

Eovaldi's fastball was the aspect that most likely bought him a spot in top pitching prospects in baseball. Eovaldi has an easy 94 mph average that ramps up even higher earlier in the game. Eovaldi's highs in the early innings have hit 97-98 mph and have stuck around through the second inning fairly consistently. If Eovaldi had qualified for this season, his fastball velocity would have been tied for sixth in baseball with Tampa Bay Rays starter Matt Moore, with Verlander currently ranked fourth.

Justin Verlander always had that fastball, but Guillen mentions that back when he was younger, he was just as raw at throwing strikes as Eovaldi has been this season. But Verlander's walk rate only once hit a mark as bad or worse than Eovaldi's 8.9 percent rate this season, and that happened in 2008. As a rookie, Verlander walked only 7.7 percent of his batters.

But is there something to the idea that Verlander and Eovaldi throw strikes at a similar rate. We often cite ball-to-called strike ratio here as a measurement of control, and we can look at how Eovaldi has done this season compared to how Verlander has developed since 2006. Eovaldi has thrown 755 balls and 364 called strikes, putting him at a ratio of 2.07-to-one, which is close to our accepted average of two-to-one.

We do not have Pitch F/X data for the 2006 season, but we can estimate Verlander's ball-to-called strike ratio from the available BIS data. When you run through the numbers, it looks as though Verlander threw 1103 balls and 480 called strikes in 2006, leading to a 2.30-to-one ratio. Yes, that means that Eovaldi has done a better job at throwing strikes that Verlander did as a rookie!

How did Verlander do since then?

It was not a gradual ascent into effectiveness for Verlander. In his first three seasons, he was still raw at finding the strike zone for called strikes consistently. In fact, he was actually worse at pounding the strike zone than Eovaldi has been this season. In 2009, his breakout year, things seemed to click, and at some point leading up to 2009 Verlander became the player we have come to lionize. Since 2009, his rates of called strikes have more or less been similar.

Swings and Misses and Secondary Pitches

Based on the above, you figure that Eovaldi has a decent shot of getting to Verlander's level, since he is not all that far away from him right now, right? Well, Verlander made another fairly large leap in 2009 in addition to throwing more called strikes.

As you can see, Verlander also figured out how to get hitters to swing and miss more often, which was a big part of his transition from mediocre hard-thrower to elite starter. So in some respects, yes, the transition for Eovaldi will involve throwing more strikes, but for him, the difficulty will be in getting swinging strikes.

As we mentioned before, Eovaldi's biggest problem will be getting swings and misses against lefties. He had some surprising success against the Atlanta Braves recently, but that was because his fastball was generating an unusually high number of whiffs. Against righties, Eovaldi is equipped with a decent slider that has gotten whiffs on 26.5 percent of the swings taken by right-handers. But against lefties, his struggles with his changeup and curveball have so far been evident.

That has never been the case with Verlander because he came into the league with supposedly impressive secondary offerings. Verlander's curveball was always well-regarded, and his changeup was similarly lauded. In terms of his pitch linear weights run values, Verlander's curveball and changeup have never been below average in terms of run prevention on a rate basis. In addition, he has since added a slider to his already potent repertoire. In comparison, Eovaldi's pitches have shown exactly what was described in earlier: his slider is effective, but his changeup and curveball have not been close. As a result, lefties have a .364 wOBA against Eovaldi (versus a .286 wOBA versus righties). Verlander, on the other hand, had a .343 wOBA against right-handers and a significant split in his rookie year, but since then has developed his secondary stuff to a degree that his splits began essentially being even from 2007 until now.

So Eovaldi does share some similarities to Verlander, though they are not necessarily tied to control, Verlander evolved to find out how to get swings and misses from hitters, and overnight he became an elite pitcher. Eovaldi has yet to figure out how he will manage that against left-handers, and that is still the barrier between the two. In terms of control and throwing strikes, it does seem as though they are even, perhaps with Eovaldi having the edge over a younger Verlander.

Essentially, if Eovaldi can figure out how to get hitters to miss his pitches from the left side, there is a possibility of him developing into half of what Verlander became. Verlander had a major head start with an extremely good pedigree and polished stuff already, so Eovaldi can only hope to reach part of the heights that Verlander achieved. But that fastball is a good start, and there is some optimism that he can become a good major league starter with just a little more development. There are enough similarities that Marlins fans can dream a little.