Yesterday, we discussed Anibal Sanchez and the prospects of having him long-term on the Fish. Today, we go in a not-completely-different direction and discuss the other bright spot for the Marlins' rotation last season, the resurgent Javier Vazquez. For much of his career, Vazquez was an enigmatic pitcher at best, confounding those who watched him with his great numbers but at times mediocre performances (remind you of anyone?), and this season was no different. To start the year, Vazquez was not confusing anyone; he looked as bad as one might expect him to after watching his disastrous 2010 season with the New York Yankees.

But at some point, everything changed, and the rest was history.

One need only look at this table from to truly understand the drastic turnaround that Vazquez underwent during the 2011 season.

This, in a nutshell, explains everything that changed from the first eight starts of the season to the period of time after May 21. During that faithful game against the Tampa Bay Rays, we saw that Vazquez had magically upped his velocity on his fastball into the 90's for the first time all season. I remember I was working when I casually asked the Twitterverse about what his velocity was at, and when I heard from @FakeTommyHutton that his velocity actually had climbed to 92 mph, I was shocked. When I saw that the game's results (seven strikeouts with two walks, seven innings of shutout baseball), they only naturally made sense given his velocity.

I began tracking the velocity after that game, and it turned out that this was not an isolated incident. 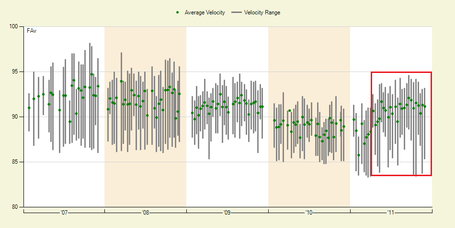 That red square surrounds the velocities on and after that May 21 game. Since that time, his velocity clearly leveled out at a level at least two miles per hour higher than his awful first few starts. With that change in velocity came a new lease on life for Vazquez.

The turnaround was spectacular. Vazquez completely corrected his walk rate and returned his strikeout rate to around his career norms. His changes did not cause fewer home runs, signaling that perhaps the problem with him before was a simple matter of control and a distinct lack of whiffs. The BABIP may have been a combination of luck and return to skill, as his career mark was around .295. Nevertheless, the improvement on the fastball velocity had a clear correlation to the drastic change in results in terms of strikeouts and walks.

Who or what should be credited for Vazquez's revival? Give a hearty pat on the back to pitching coach Randy St. Claire, who apparently noticed that Vazquez was not using his lower body. St. Claire apparently pointed this mechanical problem sometime in -- you guessed it -- late May. He informed Vazquez and the proper tweaks were made, and all of a sudden Vazquez's velocity had jumped in on May 21.

The best part about this supposed explanation, however, is that it is so plausible that it simply had to be correct. As I mentioned at Marlin Maniac, It is almost entirely unlikely that they would have come up with some post-hoc explanation to describe the drastic change in Vazquez's game.

I was elated to find out that those changes went into effect some time in late May, exactly when I had begun tabulating a change in Vazquez’s performance. And to top it all off, it sounded as if the changes discussed were "real" and not some post-hoc explanation derived to explain a visible change in performance. Vazquez’s traditional numbers actually did not change much in June; he had a 6.39 ERA in April, a 5.67 ERA in May, and a 5.52 ERA in June, even after the supposedly positive changes. Yet his FIP was a Javy-esque 3.82, which fell right in line with where he has been for most of his career.

The explanation for the positive change was almost too perfect to be true, but if the Marlins had devised a post-hoc explanation, they likely would have discussed changes that may have been made in June and not late May, which would encompass a full "bad" month of starts.

The story was perfect, the results were amazing, and St. Claire helped the Marlins profit from an amazing mechanical adjustment that changed the fate of Vazquez's season.

As amazing as the turnaround was, it cannot be ignored that his season started so poorly that it was impossible to ignore. The results were so atrocious that many people, myself included, were calling for the end of his career.

I mean, it is really difficult to say anything good about these results. Not only was there one full season of terrible performance, but also that there was a strong underlying reason (the decreased velocity) to cause the statistical drop. Given the knowledge of how difficult it would be for a 34-year old to suddenly regain his velocity, it seemed natural that it would be the end. Thanks to the work of Randy St. Claire and Vazquez, it surprisingly was not.

The Marlins lucked out with a mechanical flaw that they were able to spot and fix. Credit the scouting and medical staff for spotting the lack of health-related reasons for Vazquez's sudden decline and for correctly assessing what was wrong with him. As a result, despite the fact that the season started so poorly for Vazquez's time with the Fish, Marlins fans were privy to one amazing turnaround of epic proportions. For that, we thank you Javy. We thank you.