Basic Sabermetrics: What Will You See on Fish Stripes?

Share All sharing options for: Basic Sabermetrics: What Will You See on Fish Stripes?

Note: This is a very basic introduction to the numbers we will use on this site. Every week, I will go into a more in-depth discussion about how these numbers are derived and what they really mean. Right now, we all just want to talk about the Marlins, so I will not yet spend too much time on this. At the end of the piece, there are three takeaways that I'd like for everyone to get. If you Fish Stripers can get those three takeaways, you won't have to worry about the rest of this for now.

Later today, I am going to begin discussing in detail the various aspects of yesterday's plan for offseason success. In the process, I will be throwing in some numbers that will regularly be used on the web site. But do not fear! These are not numbers that should scare anyone. Like many aspects of sabermetrics, these numbers have a firm basis on logic behind them and are useful for telling us something about players that we perhaps did not know. In the end, numbers and observations are the tools we use to enlighten us about the game of baseball. With both our eyes and the numbers on our side, we can learn a lot about the game.

What will follow is a brief introduction to some of the numbers that we will be using here on the site. There will also be various links to simple explanations about these statistics, so that if you want a better grasp on what is going on, you can find out.

Before we go into that, I would like to point out a part of the links section that was not previously there. 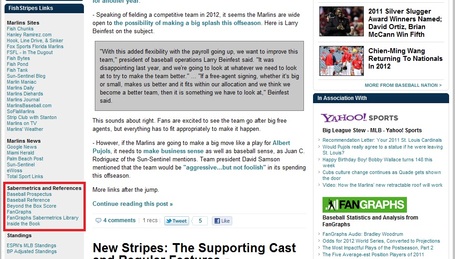 This set of links will provide tremendous assistance towards understanding some of the statistics that are used to talk about the Marlins here. Resources like Alex Remington's great Everything You Wanted To Know series on Big League Stew and FanGraphs' Sabermetrics Library are excellent starts on the way to learning more about the numbers.

However, if you just want to hear what these silly acronyms and numbers mean, let me summarize them for you.

OPS: On-Base Plus Slugging. We know that on-base percentage and slugging percentage are good. Mashing them together allows us to have a measure of both numbers at the same time for comparison purposes.

OPS+: All "plus" metrics are designed to be adjusted two things: league and park. There are park adjustments made to the numbers, and those numbers are compared to the league average. In OPS+, a number greater than 100 implies a percentage better than average, and vice versa for less than 100.

wOBA: Weighted On-Base Average. Here's the problem with OPS. For one, it doesn't take a math genius to figure out that adding two fractions with different denominators does not yield a "real" number. Secondly, because OBP and SLG are on different scales, OPS does not properly weigh those numbers; it overvalues SLG and undervalues OBP. How then can we put together the total value of a hitter? How can we resolve that issue?

wOBA is derived from a concept called linear weights, which is a measure of how many runs on average an event was worth. We all understand that not all hits are worth the same (like batting average thinks), nor are walks worth the same as home runs (like OBP thinks), nor are home runs four times as valuable as singles (like SLG thinks). wOBA uses the run values of all events such as walks, singles, home runs, and steals, and weighs them properly. For example, a home run is not really worth four times a single, but rather more like three times. A walk is worth about 2/3 of a single. All of the numbers are properly weighed and put to an OBP scale.

Here's an example of the wOBA leaderboards for this year:

There's also a wOBA calculator if you want to tinker around and find out how your favorite hitters did.

Runs Above Average: So as you can see from above, there are not a whole lot of surprises, as wOBA and OPS generally agree on the order. So why use wOBA? Well, if you wanted to know how much better a player was compared to someone else, wOBA would let you do that. We can also compare how well a player hit versus the league average and find out how many runs a player produced above average. Remember, wOBA is on an OBP scale, so the average is around .320 to .330.

If you want to find out runs above average from wOBA, you can subtract the average wOBA from the player's wOBA, divide that by 1.2 (the factor that puts it on the OBP scale), and multiply by the number of plate appearances.

UZR / TotalZone / FRAA: These are acronyms for various fielding metrics. These fielding metrics attempt to tell us how many runs above or below average a position player produced on the field compared to his position peers. For example, in 2007 Hanley Ramirez was rated as somewhere around 20 runs below average compared to other shortstops (remember that terrible year?). On the other hand, Omar Infante was good enough on the field this season that the various metrics had him between 8 and 15 runs above average. More on these in a later piece.

FIP: Fielding Independent Pitching. There has been a lot of research that says that, at the major league level, pitchers do not have nearly the same amount of control over balls in play that they do over fielding-independent outcomes like strikeouts, walks, and home runs. FIP is an ERA estimator that uses strikeouts, walks, and homers to determine an estimated ERA. In the equation, it assumes a league average performance on balls in play for a pitcher. The other three numbers are based on linear weights, so they accurately weigh each event against each other. Here is a FIP calculator you can use.

BABIP: Batting Average on Balls In Play. It is exactly what it sounds like: either a hitter's batting average on balls that stay on the field (not including strikeouts or home runs) or a pitcher's batting average allowed on balls in play. The difference is that hitters tend to be able to control BABIP better than pitchers do. Hitters face a lot of different defensive teams every year, so the effect of the defense is not as great on them (it tends to average out). A pitcher pitches in front of (more or less) the same defense all year, so his BABIP is very dependent on his defense's performance. So when a pitcher has a high or low BABIP compared to average (around .300), we tend to think that will go back towards the average significantly in the future.

WAR: Wins Above Replacement. The simplest way to explain this is with an example. Assume your team is a set of Willie Bloomquists, including the pitching equivalents to Willie Bloomquist. How many wins do you think a team of Bloomquists would win? The estimate is somewhere around 50 wins on average. Now, start filling that team up with quality major leaguers. Each of those major leaguers should be able to produce more runs and wins than Willie Bloomquist. Since Willie is the quintessential replacement level player, the amount of wins a player produces over Willie is his Wins Above Replacement.

(Note: If you don't think Willie is a perfect example for replacement level, check it out: in 10 seasons and 2437 PA, he has produced just 1.3 Wins Above Replacement.)

This is calculated by adding all those runs above average for hitters at the plate and on the field, adjusting for position, and adding in the difference between league average and replacement level. For pitchers, it's a little more hazy, so we won't get into it here.

That Was Too Much, What Do I Do?

The important thing is to not worry! It's not important that you understand everything right now. Here's a good takeaway:

1. wOBA is good for comparing hitters' total offensive contributions, including on-base, slugging, and steals.
2. WAR is a measure of wins, and it shows the relative value of players.
3. FIP can be used to see what a pitcher's ERA would be if he performed at the league average on balls in play.

If you can get that for now, I will definitely go through much of this at a later date. Every Thursday, I plan on having a little "Saber 101" article on basic concepts that are easy to understand. Right now, it may seem like a lot, but once you get a foundation, it will be much easier to grasp. If you are interested, please read the links mentioned above and ask around in sites like Beyond the Box Score.