The readers of Fish Stripes voted, and the results are in. Here is what the fan ballot looks like for your choice for All-Time Florida Marlins catcher. 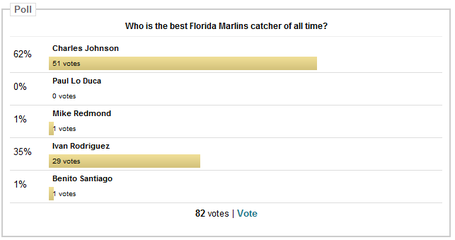 It was no surprise that the Fish Stripes readership chose between the two World Series-winning catchers, but an overwhelming majority went for the old school option of Charles Johnson over 2003 fan favorite Ivan Rodriguez. A strong 62 percent of you voters wanted the former first-ever draft pick by the Fish to be the man to man the backstop for the All-Time Florida Marlins team.

But who was the winner when we combined the polls of yours truly and the rest of the Fish Stripes crew? Let's look at for whom everyone voted.

I'd like to congratulate Charles Johnson of the 1994-1998 and 2001-2002 Marlins as your Fish Stripes All-Time Florida Marlins catcher!

Johnson beat out Rodriguez because of your votes, so those of you who voted for CJ should be proud. Congratulations again CJ, and we're glad to have you as our backstop for the Florida Marlins forever, even as the "Florida" part of the name goes away. Thanks for the memories and the ring!