Share All sharing options for: Merry Christmas from FishStripes! 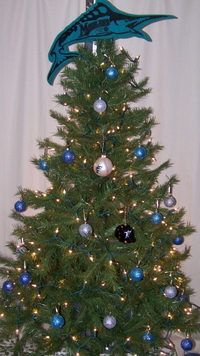 Twas the night before Christmas, and all through FishStripes,

Not a creature was posting a blog of any type. (well, uh, except GameFish, clearly)

The Fanposts were hung in the sidebar with care,

In hopes they'd be read by somebody somewhere.

The Fish Fans were nestled all snug in their beds,

While visions of Tommy John surgery for the entire Phillies starting rotation danced in their heads.

And I in my Marlins Snuggie, and Craig in his New Era cap,

Were frantically trying to get the last of the presents wrapped. (Much easier to wrap gifts in a Snuggie than a cumbersome old "regular" blanket, you know.)

When out on the lawn there arose such a clatter,

We sprang from our wrapping to see what was the matter.

Away to the window we sprang like The Hop, (much faster than flying like a flash according to multiple sports science studies)

with our cell phones handy in case we had to call the cops.

When what to our wondering eyes did appear

But @LoMoMarlins, @MikeStanton27, and that beer guy from LSS who wears elephant ears.

They spoke not a word, but went straight to their chore,

And filled the stockings with Fish wins and positive WAR,

Then they sprang to their truck, and tipped their Fish caps,

And away they all flew like a ball off Mike's bat.

But I heard them exclaim, ere they drove out of sight,

"Happy FISHmas to all, and to all a good night... and P.S. follow us on Twitter, because it is imperative that we reach eleventy thousand followers by the New Year!"