Today is the anniversary of Jackie Robinson breaking the color barrier in major league baseball.  To honor the event there is a bit of change from the past, all players will wear number 42.

By request of Commissioner Bud Selig, as Major League Baseball celebrates the 62nd anniversary of Jackie Robinson breaking its color barrier on Wednesday, all big league players and uniformed personnel have been asked to wear the late Hall of Famer's famous No. 42 on the field when the 30 teams celebrate the occasion.

Wow, Selig did something right.  Who would have thunk it.

The day has special meaning for Cameron Maybin.

...Few are prouder to do so than center fielder Cameron Maybin.Maybin's father, Rudy, made sure his son grew up with an awareness of what Robinson and other African-American players endured after breaking the color barrier."Pretty much at a young age I started to learn about what those guys had to do to get where they were," Maybin said. "It helps me appreciate where I am a lot more." After the Detroit Tigers drafted Maybin and gave him a $2.65 million signing bonus, he made a contribution to the Jackie Robinson Foundation.

Not only wearing number 42 Maybin will be wearing shoes designed to commemorate the day.  Nike sent me the follow by email.

As you probably know, today is the MLB’s annual "Jackie Robinson Day," and as a tribute, several Nike baseball athletes – including Cameron Maybin – will wear uniquely designed cleats that feature an engraving of Robinson’s iconic image sliding into home plate as well as his number ‘42’ stitched on each heel.

Here is picture of the shoe. 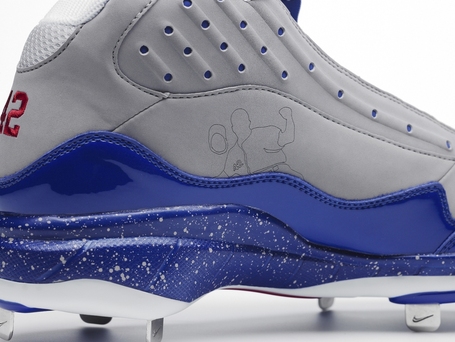 Maybe you would have noticed that Maybin was sporting different footwear than normal.  Personally, I am much like the character Morgan Freeman played in "The Shawshank Redemption" who said: "Really how often do you look at a man's shoes?"  I sincerely doubt I would've noticed.  I guess it is a character flaw on my part.

Anyway, it is Jackie Robinson Day!