The game was what most expected, a duel between two of the most excellent pitchers in the game today.  Johnson and Santana both were dealing but these type of games aren't decided, necessarily, by the ones on the mound.  They are decided by which team can take advantage of the very few opportunities they will get.

In the case of the Marlins when they finally got an opening, they pushed two runs across the plate.  Unearned albeit, but when the defensive mistake happened they pounced.  In the case of the Mets, when the door was left open by a bad call by the umpire they were only able to get one run across before Johnson shut the door.

And thus, the Marlins won.

A couple of notes:  I like this game ending strategy of putting Brett Carroll in left and then pitching so the other team hits the ball to him.  It seems to be working well. 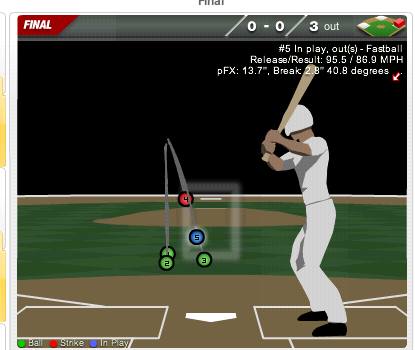 I don't know if that was the actual plan or not, but it makes my story really nifty.

The other one is about Johnson and the effort he had to make in the ninth.  Josh threw 21 pitches in the ninth in a high pressure situation when he was already tired.  This isn't a good thing since it can lead to a future injury, especially when done this early in the season.  However, Johnson is young, big and strong whose throwing motion is very easy, so it may not be a cause for concern but it did raise an eyebrow.

I understand why they left him in, he pitched a beauty and there was no one in the bullpen who was a better pitcher at that point in the game.

So all in all, just another routine Marlins win.